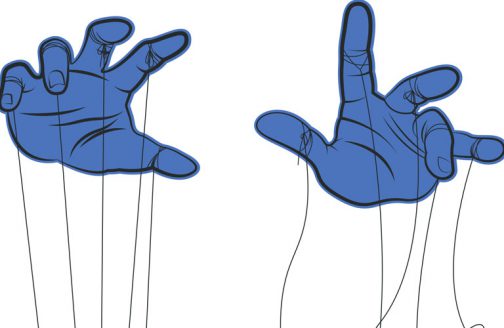 It was a bit of good news, at least for the Rheinische Post: “Facebook is promoting journalists in Germany,” ran a May 2018 headline of the Düsseldorf daily. “Facebook is honoring a pledge to invest in the struggle against online fake news via technological solutions as well as through advanced training.” It sounded like Germany’s journalists and public at large had been longing for such a commitment.

Since November, Facebook has been financing a training program at the Hamburg Media School (HMS), an institute that educates and trains journalists and other hopefuls in the film and media sectors. Stephan Weichert designed the program “to promote a culture of innovation in German editorial offices.” The professor of journalism and communicology is seeking to “reconcile the divide between journalistic aspiration and the digital transformation.”

Others, however, have voiced strong opposition to Facebook’s program funding. Thus, the online expert Peter Welchering says: “Journalistic training financed by an internet company with a controversial business model, by a firm that commissions smear campaigns to silence its critics? This sort of journalistic training contributes to the demise of journalism.”

According to an HMS press release, 40 days of training scattered over one year expose the fellows to “the entire spectrum of digital journalism, from mobile storytelling to entrepreneurial thinking and the ethics of digital media.” The program concludes with a 10-day trip to New York City and Silicon Valley.

Along with coding and data journalism, verification and ethics figure prominently in the curriculum. Whether and how the fellows critically address the phenomenon and content of Facebook remains unclear.

The university is financed with public and private funds, partly by the city of Hamburg and the public broadcaster Norddeutscher Rundfunk (NDR) and with support from Der Spiegel, Die Zeit, the publishers Gruner + Jahr as well as Springer, Bertelsmann, Google and Xing, Telekom and various other media companies. The board of directors representing the sponsors has signed off on the project.

Carsten Broda (SPD), the Hamburg cabinet member in charge of culture and media, welcomed the cooperation with Facebook: “The philosophy of promotion practiced by HMS amounts to a public-private partnership in league with other esteemed institutions such as the European Journalism Center, the Poynter Institute, the Reuters Institute in Oxford and the City University of New York.”

Facebook has been a benefactor since 2017. According to the HMS website, “Facebook has forged a partnership with HMS in establishing the global News Integrity Initiative (NII).” The training program is a global pilot project for Facebook that is initially limited to one year.

An advisory board of renowned journalists will ensure its independence, assist in the selection of applicants and advise Weichert in terms of content. Guido Bülow, a Facebook employee, is but one of many advisors – an assurance he and Weichert stressed in an interview. In terms of content, Facebook is allowed zero influence.

One requirement of all 20 fellows is several years of experience in journalism. Heike Hampl was trained by a local daily newspaper and had already been an editor for four years. She then jumped ship and became a spokesperson for a local government as well as an online editor for the party newspaper of Bavaria’s ruling CSU. Since 2017, she has again been working for a daily newspaper. Klaus Irler is an online editor for taz, the left-leaning alternative daily newspaper published in Berlin. Gabriela Keller is as a multimedia editor in the investigative team at Berliner Zeitung. Ann-Katrin Müller has been a politics editor at Der Spiegel since 2013. And Laura Terberl is responsible for podcasts and digital product development at Süddeutsche Zeitung.

After just under eight months, Weichert considers the fellowship to be a success. He would like to offer it again in 2020 and to add as many new benefactors as possible. “The positive resonance of the DJF program shows that we – the HMS – have made a meaningful contribution to democracy and society by offering a tuition-free advanced training program for independent and institutionally employed journalists.”

A spokesperson for Facebook vows: “We will carefully evaluate the experience and in a timely manner make a decision on whether to continue the program.”

Facebook and the HMS have remained silent on the amount of funding the program requires. A Facebook spokesperson stated that “we are making no public disclosures on the matter. The vision of the Facebook Journalism Project – to contribute to the organizations and programs that strengthen the future of high-quality journalism and an informed public – is a significant investment. Our funding allows the HMS to select the right instructors and participants for a tuition-free training experience that also includes travel costs.”

What qualifies as “significant” for a corporate giant swimming in billions of marketing dollars? The funding could be in the ballpark of that which was announced by Facebook in January 2018 for several international journalist associations, each of which received $250,000. The program at the HMS, which includes speaker fees as well as all travel expenses and lodging for the 20 fellows, could presumably be fully financed with even less than that amount.

Is Facebook’s funding of the program a corrupting influence? Not all journalists are wary of the proximity of the elephant, Facebook, which informs and influences politics, industry and society. Google and Facebook dominate the advertising market – and have now become two of the world’s most active financiers of journalism. They determine what is funded – and what isn’t. Emily Bell, the journalism professor who conducts research at New York’s Columbia University, has coined the term “frenemy” to describe the two giants.

NDR has raised questions as to whether HMS is too close to Facebook. One journalist critical of Facebook is the online expert Peter Welchering, who reports regularly on the social media behemoth for German public radio. In some cases he has addressed suspicions that Facebook gathers information on its competitors. Welchering speaks of a Facebook secret service. He has also reported on Germany’s Gesellschaft für Informatik, an association of 20,000 computer science educators, which eliminated its Facebook presence in May, warning that “Facebook is a threat to democracy and an enemy of data protection.”

Welchering sees no hope for change in the foreseeable future. Volker Lilienthal, a journalism professor at the University of Hamburg, also points to the “precarious ambivalence of Facebook’s relationship towards journalism,” going as far as to speak of a “colonization of journalism.” Media and, above all, the journalism training program should “maintain a critical distance” from Facebook and Google, “even if it’s impossible to completely forego Facebook in the digitalized media environment. Facebook and Google are doing something for journalism, including at the HMS. But in my opinion, what they are giving is mere tactical consolation for the considerable losses suffered by journalism and the media due to the existence of Facebook.”

Lilienthal continues: “The HMS says: Facebook has no say in our curriculum and an independent supervisory board will see to it that this remains the case. And I believe them. But Facebook’s proximity is already having a corrupting influence, for instance in terms of gratitude towards a sponsor. Won’t the supported students, i.e. the beneficiaries of this fellowship, be more positively inclined toward Facebook?” Lilienthal is distancing himself from any such promotion via the HMS.

For Christian Kreiß, an economics professor at Aalen University and the author of a book on “bought research,” the establishment of HSM as a public-private partnership is “a planning error. The moneyed and commercial interests co-financing the HSM have no place in an open and free educational format, as well as nothing at all to seek. Otherwise it would no longer be open and free.” He bemoans the fundamental lack of transparency, as there is no disclosure of who pays the HMS how much and what influence they may wield. “Transparency should be the bare minimum to be provided when accepting commercial funds.”

Even more problematic is yet another example of Facebook sponsorship, says Kreiß. In January, Facebook and the Technical University (TU) of Munich, one of Germany’s most renowned institutions of higher learning, announced that the TU received €6.5 million from Facebook to found an ethics institute for artificial intelligence and to research ethical guidelines for the development and use of artificial intelligence. A board of esteemed scientists, scholars and other public figures will determine who researches which topics; the first projects will be presented at a conference this October.

The university and the Bavarian state government welcomed the funding. However, the Green Party’s spokeswoman for research policy in Bavaria’s state parliament, Anne Franke, warned that the topic is too important to allow Facebook, of all corporations, to compromise research with a golden straitjacket.

Christian Kreiß is also critical: “I assume that the university will conduct flawless industry-relevant research.” However, if the Facebook/TU Munich example becomes the rule, he warns, future university policy could look like this: large national and international corporations pick and choose the 1,000 professors at German state universities whose pro-industry leanings and statements would be most favorable to their bottom lines. “They decide to make tens of millions of euros available to each of these professors – without a tendering process or a competition for the money, as in the case of TU Munich/Facebook – to be spent entirely at the discretion of the selected people without the direct assertion of any influence, since it’s not necessary to begin with. Only the true free-thinkers among them would need to be spoon-fed or muzzled.” 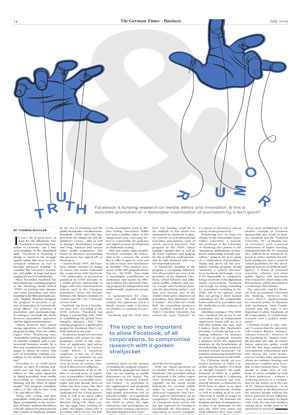