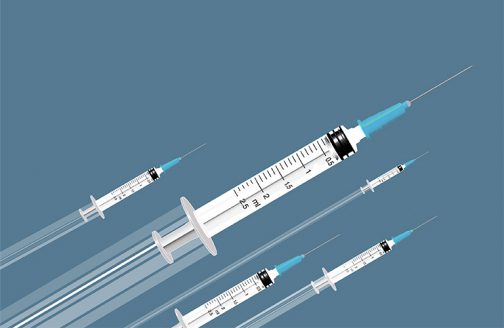 Infection numbers are sinking in Germany. Life has somewhat returned to normal. The economy is recovering. Yet gratification over the fairly mild course of the pandemic is being tempered by fears of a second wave, which could wreak havoc if it were to descend upon the Federal Republic as early as this autumn. A full return to normalcy will only be possible once a vaccine against the virus has been developed. And this applies not just to Germany – immunization is vital for the entire population of the world.

The race for a vaccine has been underway for some time. But the contest is not just about big business – it represents nothing less than an international struggle for technological dominance.

Around 180 research teams from across the globe are working on developing a SARS-CoV-2 vaccine. And the first results are in:

The US biotech company Moderna will begin its third and last phase of clinical trials before the end of the summer.

The French pharmaceutical firm Sanofi expects to receive certification for a vaccine for the first half of 2021.

University of Oxford researchers have begun their second phase of human trials.

At the end of April, the Mainz-based BioNTech was the first German pharmaceutical manufacturer to receive approval to test a viral agent on human volunteers. If the vaccine is granted certification, the company will work with the US corporation Pfizer to produce up to 100 million doses of the vaccine by the end of the year. This is an ambitious goal, but this amount would not even be enough to treat one-quarter of all Americans.

“Vaccines, tests and medicines must be available, affordable and accessible worldwide,” Chancellor Angela Merkel recently urged at a donor conference that yielded €6.15 billion to fight the pandemic. Microsoft founder Bill Gates called for COVID-19 immunization to be classified as a “global public good.” Even Chinese President Xi Jinping vowed at the annual meeting of the World Health Organization (WHO) that China would make the vaccine available to poorer countries, as well, if a research team from his country succeeds in becoming the first to make a breakthrough in development.

“The world is united against the coronavirus, and the world will win,” said President of the European Commission Ursula von der Leyen. Yet despite these lofty words, the global threat posed by the pandemic may not suffice to foster true solidarity among the countries of the world. The distribution battle is already underway.

Weeks ago, it was reported that President Donald Trump’s government had offered the Tübingen-based firm Curevac money in exchange for the exclusive rights to the vaccine. Curevac declined.

The Trump administration tried the same with Sanofi, whose research project had received funding from Washington. Sanofi initially appeared to be persuaded, but after sharp criticism, the company announced that the vaccine would become available to all regions of the world simultaneously.

Things work differently in the US, where, according to media reports, pharmaceutical companies only receive funding in return for supplying the US population first.

The highly anticipated COVID-19 vaccine has become a power factor in the showdown between countries across the globe. In Beijing, the results of efforts to develop a vaccine are mentioned in the same breath as the new mobile communication standard, 5G. According the foreign ministry in Beijing, China is leading the world in the race for a vaccine. For China, it all comes down to demonstrating superiority in its duel with the US.

The impetus for supplying personal protection equipment (PPE) to Italy at the start of the crisis was apparently not altruism on the part of China. Rome paid for the help and Beijing exploited the move for propaganda purposes. These experiences leave no reason to assume that China will selflessly share the results of its research with the global community.

Germany’s federal government recently allocated €750 million to fund a national program for the development and production of a vaccine. There have thus far been no efforts to tie the funding to the stipulation that Germany benefit from the research results before all other countries.

The European Union has now announced the formation of an international coalition to draw up preliminary agreements with developers and manufacturers of the vaccine. Yet the risk still remains that Germany and Europe will host numerous donor conferences to amass the majority of the funding required for the development of a vaccine, while other countries will simply end up reaping most of the benefits.

It was recently revealed that the federal government invested €300 million in Curevac, enough to acquire 23 percent of its shares. Contrary to contingent offers from the US government, exclusive promises or rights for the German population were not on the table.

At issue, however, was a signal that a key element of Berlin’s industrial strategy is to prevent the cession of German health-sector companies to foreign investors. Still, the pharmaceutical company BioNTech recently received €220 million in new investments, including from the Temasek investment fund, which is owned by the city-state of Singapore.

Investment is a wager on the future. The company that makes the first breakthrough can count on huge profits, as it will be able to apply for the patent for the COVID-19 vaccine. Intellectual property is legally protected throughout the world – whoever makes a discovery will be sure to see considerable financial gain.

But French President Emmanuel Macron is seeking to prevent companies from profiting from the misery of the pandemic. He is urging manufacturers to shield the vaccine from the dictates of the market and make it available at cost price.

A company could actually refrain from registering at the patent office, with the result that the vaccine would directly enter the public domain, where it could be used by everyone. For economic reasons, however, it is highly improbable that a company would forgo the profits, even if such a decision would burnish a company’s public image, which could in turn reap financial reward. Furthermore, such a move can bring legal problems for corporations that neglect their fiduciary obligations to provide maximum profit to their shareholders.

Germany recently approved a special provision that empowers the federal ministry of health to use an innovation “in the interest of public welfare.” The consequence would be that vaccine would be freely accessible despite the awarding of a patent.

Moreover, patent protection can be limited by the issuance of compulsory licenses, if such a measure is found to be in the public interest. In other words, the protection of the lives and health of citizens is prioritized over the reaping of the full profits from an innovation.

It is disputable whether a risk to public health always justifies a compulsory license. Critics argue that incentive for research could diminish if discoveries and innovations no longer yield financial reward.

The debate over compulsory licenses was conducted with particular intensity in relation to AIDS medication. Only after sharp criticism from developing countries did it become feasible to alter the treaty on trade-related aspects of intellectual property rights, which resulted in the TRIPS Agreement.

Yet in the case of a compulsory license, innovators still receive “commensurate remuneration,” the value of which depends on certain factors such as the economic performance of the country requesting the license. This means that the US, Japan and Germany would have to pay more than African countries to have access to the vaccine. Pharmaceutical companies are thus going to need a dose of idealism before giving it their all in the race for the vaccine.

Helene Bubrowski
is a political editor for the Frankfurter Allgemeine Zeitung. 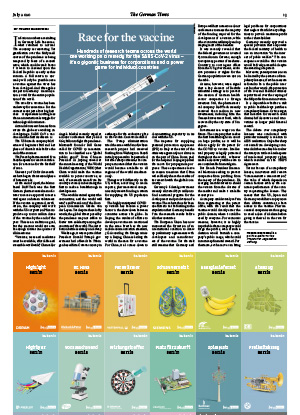