Germany’s military is too small. That’s what the Poles say, and the French, and the Brits, and the Americans. Instead of fearing German military aggression, as they did in 1914–18 and again in 1939–45, they fear the country’s military weakness.

How times have changed. No state disarmed as thoroughly following the end of the Cold War in 1991 than reunited Germany. This was enshrined in the Two-Plus-Four treaty involving West and East Germany plus the four victorious powers of World War II – the US, the UK, France and the Soviet Union. The army of reunified Germany, it was agreed, would not exceed a strength of 370,000 troops. The old West German Bundeswehr numbered 500,000 soldiers, East Germany’s National People’s Army 160,000. Downsizing was thus a binding commitment.

Today, some 180,000 troops serve in the Bundeswehr, which has since become an all-volunteer force, although the smallest Bundeswehr of all time no longer has just one chief mission, as it did before 1990 (NATO defense) or following that year (foreign deployments). The German military must now fulfill both tasks equally.

This means maintaining the force’s 13 current external deployments, from the Balkans and Mali to Iraq and Afghanistan, while joining in the collective defense of Europe with the NATO Response Force, NATO naval task forces, the air policing over the Baltic region and the German-led NATO battalion in Lithuania.

Meanwhile, the German force’s military capabilities and effective hardware have generally deteriorated in recent years. New initiatives have been introduced that target human resources, hardware and expenditures, but have yet to be felt.

I deliberately made my first official troop visit as the Bundestag’s new Bundeswehr commissioner in 2015 to the German contingent of NATO’s rapid deployment unit, the VJTF (Very High Readiness Joint Task Force). There on the grounds of the Bergen Training Area, I was handed a list of 15,000 items of equipment and weapons systems that had to be borrowed from other parts of the Bundeswehr so that at least the 1,000 German Panzergrenadiers would be available for immediate action.

That was in 2015. Three years later, nothing has changed in the practice of back-and-forth borrowing. The material situation remains dramatically inadequate and in some ways has even worsened. At the beginning of 2018, all six of Germany’s combat submarines were out of service. At times, not one of the new A-400M transport planes could fly. Whether using Eurofighters, Tornados, Transalls, CH-53s, Tigers or NH-90s, air units lamented inadequate flight hours for crews, as too many aircraft were unusable on too many days of the year.

The navy casts a similar picture. The decommissioning of old ships works smoothly, but activation of their replacements is years behind schedule. Instead of the force’s official plan strength of 15 frigates, only 9 now exist. And among these 9, the periods at dock keep getting longer as the ships get older, spare parts are lacking and project management – both on the Bundeswehr side and that of Germany’s arms industry – falls short of expectations.

The problems of managing shortages, overlong servicing times and the systematic lack of spare parts affect the navy, army, air force and joint support service equally. The causes can be found in decisions made in connection with the Bundeswehr reform of 2011. In the wake of the global economic and financial crisis, the priority was to cut costs across the board, irrespective of consequences.

The government and lawmakers will have to make sure they order new arms systems, as they did earlier, complete with all accessories including spare parts, testing equipment, simulators and peripheral training. It will cost more, but work better.

The budgetary changes, at least, are taking form. By 2024, German military expenditure is slated to rise from €40 to €60 billion annually. That would then be 1.5 percent of GDP – and approximately the same total that Britain and France devote to their armed forces. The Bundeswehr’s acquisition management also needs immediate attention. Far too often in the past, funding approved by parliament for the armed forces has remained unspent.

The government is also planning a new initiative in human resources. The defense ministry has come out with new target figures. By 2024, manpower is to rise by 12,000 to an on-paper strength of 198,000 soldiers. The additional volunteers will, of course, all have to be garnered on the free market. Germany’s economy is booming, after all, and competition is tough. Police forces around the country are also swell­ing their ranks. To attract both more young people and qualified personnel from elsewhere in the labor market, the Bundeswehr can and must get better – and fast.

That’s because the new tasks to be met with the additional manpower and equipment already exist today. The men and women now in uniform must shoulder these challenges on a daily basis as best they can. This will succeed only through great commitment, improvisational talent, a sense of duty, solidarity, camaraderie and, sometimes, with humor. Many servicemen and servicewomen go beyond the call of duty. Internationally, too, German soldiers enjoy the high esteem of their peers. They deserve to once again be fully equipped and prepared for the tasks at hand.

Hans-Peter Bartels
(SPD) has been the Bundestag’s commissioner for the Bundeswehr since May 2015. 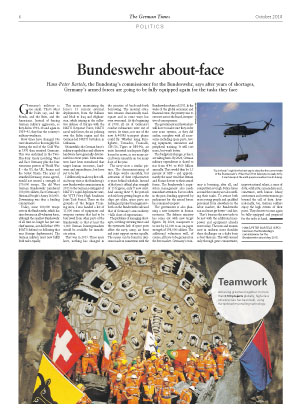