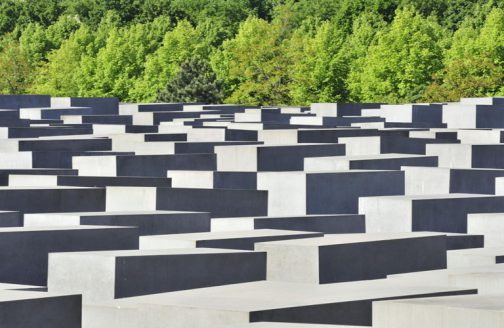 In May, the Federal Republic turned 70, making it by far the longest-lasting political formation in the history of modern Germany. It will soon have outlived the German Empire (1871–1918), the interwar Weimar Republic (1918–1933) and the Third Reich (1933–1945) combined.

The Federal Republic is a remarkable democratic success story and the only such story in German history. Built on the ashes of the Nazi dictatorship, it has become a stable, prosperous and pluralistic democracy. With the collapse of Communism and German Reunification in 1990, the West German state absorbed the territory of the former German Democratic Republic in the East.

Post-unification fears among Germany’s neighbors of an unpredictable and dangerous enlarged country at the center of Europe have proven unfounded. Instead, the country that perpetrated the worst genocide in human history – the murder of European Jews in World War II – now ranks among the “best” countries in the world, according to the annual study by the U.S. News & World Report.

Amidst the celebration, it is important to remember that it could have turned out differently.

In fact, postwar Germans always feared that democracy might fail again. Surprisingly, the Federal Republic has owed its success in no small part to an unpleasant emotion: fear. While liberal philosophers from Montesquieu to Martha Nussbaum have associated fear with tyrannical forms of government, describing it as antithetical to democratic societies, fear has also played a positive and productive role in creating and preserving democracy in postwar Germany.

The main source of trepidation for postwar Germans was the fear of repeating the Nazi past, a specter that retained a powerful presence over the Federal Republic, as any visitor to the many memorials in Berlin can attest. Yet the centrality of commemorative culture not only helped Germans make sense of their past; it also defined their anticipation of possible futures.

In the immediate postwar period, Germans perceived themselves as victims of war and fascism, and they feared being victimized again in a nuclear war at the forefront of the Cold War. In the 1960s, Germans began to grapple with their role as perpetrators, such as during the trial of former concentration camp guards at Auschwitz (1963–65). A more critical memory of the Nazi past mobilized fear of a possible authoritarian transformation of the Federal Republic. It sensitized West Germans to powerful authoritarian tendencies within their society that had remained hidden, just like former Nazi perpetrators, beneath the surface of democracy.

Such fears for the demise of democracy also influenced the West German student movement, the “68ers.” This movement arose in response to new “emergency laws” that made it possible to rescind democratic rights during a national emergency. Student activists feared that this would lead to a new 1933, the year Hitler came to power. These protests ensured that the final draft of the laws passed in May 1968 by the first grand coalition of Christian and Social Democrats had important democratic safeguards built into them.

The feared “emergency” has never been invoked. Still, fears of an authoritarian turn persisted for quite some time. West Germany’s most prominent intellectual, the philosopher Jürgen Habermas, said in 1994 that he had not fully trusted the democratization of the Federal Republic until the 1980s.

With the benefit of hindsight, it is easy to dismiss such fears as irrational or hysterical. But their articulation provided a powerful safeguard against authoritarian temptations. The ever-looming Nazi past served as a powerful reminder of how quickly democracies can fail. West Germany remained a polity on alert.

Fear not only helped avert a new authoritarianism, it also served as an emotional engine for political activism. Fears drove the West German environmental and peace movements of the 1970s and 1980s: fear of radioactive poisoning, fear of a nuclear accident, fear of nuclear war.

These movements had a powerful impact on West German political culture. To this day, Germany houses one of the strongest environmental movements in the world. The peace movement of the early 1980s was the largest protest movement in the history of the Federal Republic, with mass demonstrations comprising up to 500,000 people. A newly explored memory of the Holocaust – resulting in the very word becoming part of the West’s cultural vocabulary – informed apocalyptic scenarios of a “nuclear Holocaust.” German pacifism has also endowed the Federal Republic with a deep aversion to military endeavors.

Center-right and left-wing governments refused to participate in the Iraq wars in 1991 and 2003. Conservative critics within Germany and abroad condemned this attitude as indicative of a “German Angst” – an unhealthy and excessive fear unique to the Federal Republic, and another term that has become part of the Western lexicon. Yet in the aftermath of Chernobyl and Fukushima, and in light of the disastrous consequences of the Iraq war, with up to 288,000 violent deaths so far (according to the database iraqbodycount.org), these fears no longer appear so pathological. In retrospect, they seem quite perceptive and indeed appropriate.

Yet, not all fears are good, of course. In particular, there is a difference between fears of an abstract future scenario – an authoritarian transformation, nuclear war, climate change – and fears afflicting specific individuals or groups. The Federal Republic has featured those fears too: fears of revenge by Holocaust survivors and former slave laborers, fears of subversive Communists, fears of terrorist sympathizers in the 1970s, fears of guest workers, Muslims, and, most recently, refugees.

In fact, a right-wing populist party – Alternative for Germany (AfD) – is currently mobilizing fears of Muslims and foreigners with barely disguised racist electoral campaigns that earned the party 12.7 percent of the national vote in 2017. The AfD is the German version of a global right that specializes in the racist othering of specific groups. The presidency of Donald Trump is based on the mobilization of such fears as well. Such personalized fears always bear the risk of being transformed into hatred and eventually into violence.

The global rise of authoritarianism demonstrates that we can no longer take for granted the natural progression of liberal democracy. At a moment when democracy in the US and elsewhere faces unprecedented challenges, we would do well to remember postwar Germans’ anticipation of a catastrophic future. Their sense of coming uncertainty as well as their awareness of the fragility of democracy speak again to our present predicament.

Climate activist Greta Thunberg invoked this progressive possibility of fear when she demanded that world leaders at the World Economic Forum in Davos “panic” and “feel the fear that I feel.” Fears for the demise of democracy are an essential and important element of democratic societies.

Today, it is no longer “fear itself” that we have most to fear, as US President Franklin D. Roosevelt famously declared in his first inaugural address. Instead, we should carefully consider what exactly we are afraid of, as these fears could indeed prevent the realization of the future that they imagine

Frank Biess is a history professor at the University of California San Diego. His book Republik der Angst. Eine andere Geschichte der Bundesrepublik (Republic of Fear. An alternative history of the Federal Republic) was published by Rowohlt Verlag in February 2019. An English version is due to appear in 2020

Frank Biess
is a history professor at the University of California San Diego. His book Republik der Angst. Eine andere Geschichte der Bundesrepublik (Republic of Fear. An alternative history of the Federal Republic) was published by Rowohlt Berlin in February 2019. An English version is due to appear in 2020.

Europe and the US have failed in Syria 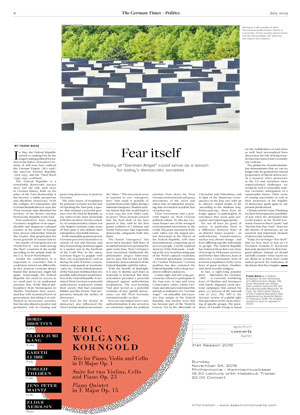