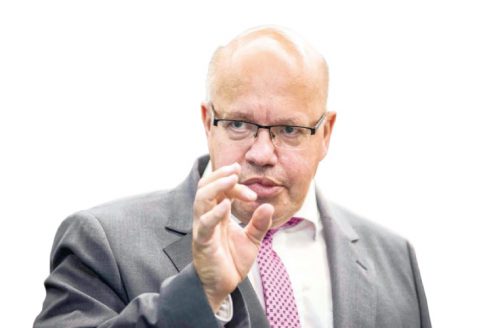 Germany’s Minister for Economic Affairs Peter Altmaier speaks to The German Times on trade, Trump and taxing US companies in Europe

Minister Altmaier, economically speaking, Germany is on pretty firm footing. Economists call this the “strongest boom in two decades.” Growth is exceeding 2 percent; per-capita GDP is rising; unemployment is low; average wages and consumer spending are both growing. And yet, millions of people feel left behind. How can you help them?

We’re now in the ninth year of a period of strong economic growth. Despite many international risk factors, Germany’s economy will continue to grow into next year. That would then be the longest period of uninterrupted expansion since 1966 – more than half a century ago. Wages and pensions are rising, and next year we’ll probably cross the “sound barrier” of 45 million employed people. This is the highest number of working people our country has ever seen. But there are also people whom the upswing has not yet reached, who feel left behind or forgotten by our elected officials. We take that very seriously. For that reason, in my office, as head of the Federal Ministry for Economic Affairs and Energy, I work to bring to life the central pledge of the social market economy, namely, prosperity for all. That’s why we’re raising spending on investments and innovation, so that in the future “Made in Germany” will remain an assurance of the most advanced technology and jobs anywhere in the world. We are strengthening our industries with an industrial strategy, investing in social housing, improving pension payments and lightening the burden on families.

Companies are urgently seeking skilled labor. Soon the baby boomers will start retiring. Migration could help. How should it be regulated?

Specialized workers are in urgent demand in many firms. That’s why we must raise our potential both at home and abroad. For the latter, we agreed in the coalition agreement on an immigration act for specialized labor. We must pass it into law soon. But we must also look to our own country for nurturing and keeping these workers. We cannot accept having 800,000 long-term unemployed in this country. Education – specifically our proven model of dual-track professional training and qualification – is the key there. Yet we must also ensure that skilled people who want to work, can work. For this we must push faster for expanding childcare.

The economic upswing, as not only employees point out, benefits the affluent first and foremost. Your predecessor’s annual report calls “excessive income inequality” an “obstacle to inclusive growth.” What would you do to improve every­one’s share of the economic boom?

First of all, we should not play down the good news we have seen on the labor market. Employment in Germany has risen to a record high while unemployment has fallen to a historic low. Wages have climbed steadily in recent years, and so have pension payments. Wage inequality has not gone up further. Wages and employment have also grown very well by international comparison. We must ensure that this trend continues and that Germany remains competitive. Full employment is possible and remains our goal. We will continue easing the burden on workers, such as through unemployment insurance and eliminating the solidarity surcharge for most taxpayers.

Another critic of Germany’s economic data is the US president, specifically Germany’s trade surplus and its “unfair” practices. Is he right?

This surplus reflects first and foremost the competitiveness of our private sector and its products and services, which we have restored with great effort over the past 15 years. We have to take a more nuanced look at the “surplus issue.” The public debate often ignores the fact that, in bal­ance of payments, the US has a surplus against the EU. That’s because of the many successful US-based digital companies operating in Europe.

In return, Germans complain that US corporations pay no taxes in Germany. How can the German government stop US tech companies from shifting their revenue and profits to low-tax EU states such as Ireland and the Netherlands?

Fairer taxation of big corporations is an explicit goal of this government, and that goes especially for IT companies. We must stop companies that avoid their tax duties through profit transfers or tax optimization. Germany’s finance minister is holding talks at a European level to find good solutions. He has my support for his efforts.

Public investment was raised massively during Chancellor Merkel’s previous term. And we will continue to raise spending on investment and innovation, especially in digitization, education and security. Expanding digital infrastructure, in particular, must move faster. We need more private investment, which, at more than 90 percent of the total, provides the lion’s share of total investment. There we want to keep promoting the investment climate and providing targeted incentives, i.e. tax breaks for research and development and energy-saving building modernization. And we must discuss unburdening companies so they can stay competitive internationally in the future.

Germans lament what they see as the ignorance of the current US administration and the Russian president toward climate change. How can we convince the big CO2 emitters to do more to save the planet?

Climate change is a global phenomenon that requires joint international action. Hence, we deeply regret the US withdrawal from the Paris Agreement. On the other hand, it’s been heartening to watch US states such as California and New York commit themselves to protecting the climate nonetheless. Germany has not only set ambitious climate goals nationally; we also contribute disproportionately to efforts at attaining EU climate objectives. Once we demonstrate that an economically vibrant industrialized country like Germany can meet this challenge, the transi­tion to green energy will finally become a model for economic success. Other countries should do their share. Only then does our planet have a chance in the not too distant future.

The EU and US have imposed sanctions against individuals and individual assets because of Ukraine. Do you see any success there?

The EU has just extended its sanctions against Russia. They will remain in place because, regrettably, there has been no progress in the peace process for Ukraine.

German entrepreneurs in Russia want relations to return to normal soon, without sanctions. Can you raise their hopes?

Eastern Europe and Russia will remain very important economic areas for us. Many German companies, especially in the country’s east, have good business ties with Russia. I want to keep expanding economic ties in areas free of sanctions. Our dialogue and exchange with one another must continue, and business relations are a good foundation for that.

The Nord Stream 2 gas pipeline through the Baltic is being built, and criticism is non­stop, from both the US and other European states. Are we making ourselves dependent on Russian gas?

Germany has a diversified supply grid, in terms of gas as well. Additional lines also deliver energy to other places in Europe. Nord Stream 2 is, above all, a corporate project. Yet we must also consider the rightful interests of Ukraine. I have had talks in Moscow and Kiev on the matter. This summer in Berlin, at my invitation, a meeting between Russia, Ukraine and European Commission Vice-President Maroš Šefčovič was convened to address the issue.

Brexit and “America first,” Russian muscle flexing and China’s economic expansionism are all symptoms of resurgent nationalism and a retreat toward spheres of influence. Is there any hope left for “together first”?

I am firmly convinced we can solve global problems only through international cooperation. Just think of conflicts like that in Syria, climate change, the growing global population, rising protectionism – we need global responses to these challenges. And we need to work together more, not less. Right now we can see what happens to trade when protectionist tendencies gain ground.

At the end of these spirals, everybody loses. There can be no winner. That’s why it’s all the more important to talk to one another and advocate continued international cooperation and rules-based trade within the framework of the WTO. With the agreement between President Trump and Commission President Juncker we now have a chance to negotiate with the US over dismantling tariffs instead of issuing new ones. I think that has opened up the opportunity to defuse the looming trade conflict between the US and the EU in the coming months. 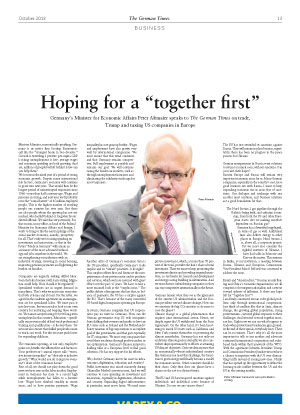