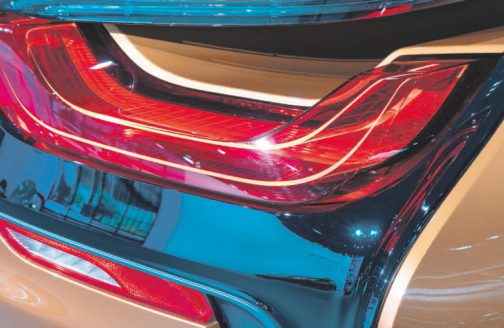 Sighs of relief resonated throughout the German business community when US President Donald Trump and EU Commission President Jean-Claude Juncker agreed on negotiating a EU-US trade deal in late July. In a joint statement, the two leaders decided to work together towards zero tariffs, zero non-tariff barriers and zero subsidies on non-auto industrial goods. They also agreed to launch a close dialogue on standards in order to ease trade. An executive working group was tasked with scoping out the content of the trade deal. For the time being, the understanding puts the escalating trade conflict between the two eco­nomic superpowers on hold, but the outcome of the negotiations is anything but certain.

Since Donald Trump took office in early 2017, US-EU relations have met turbulent waters. Relations between the United States and Germany are particularly strained. Steel and aluminum tariffs, the threat of tariffs on cars, the escalating US-China trade conflict, renegotiations of NAFTA and the attacks against the World Trade Organization – US trade policy has been fundamentally transformed.

President Trump wants to bring jobs and manufacturing back to the United States. In 1990, manufacturing still accounted for about a quarter of US GDP – in 2017, the share had dropped to about 12 percent. US manufacturing is struggling to keep up with world markets.

But tariffs are not the right way to create jobs and to revive industries. Indeed, such measures could cause more harm than good to global trade and the American economy.

A recent analysis from the consulting firm Trade Partnership projects a net loss of over 400,000 American jobs through tariffs on steel and aluminum. Moreover, the study concludes that the tariffs could likely lead to lower consumer spending power in the United States as well as higher production costs.

There is some truth to the narrative that competition on world markets is not always fair. But an escalation of protectionist measures will not change this. Rather, tariffs pose a serious threat to welfare and jobs – worldwide but also in the US.

According to the International Monetary Fund, world trade is expected to grow by a further 3.9 percent in 2018. However, a further escalation of trade disputes could seriously impede the business climate, trade and investment as well as damage global value chains, the IMF warns. According to the World Bank, if WTO members raised their tariffs to just around the WTO-bound limits, world trade would decline in line with the 2008–09 global financial crisis. In 2009, global merchandise trade dropped by 22 percent.

While trans-Atlantic business relations are still strong, the German business community is deeply worried about the future of EU-US relations. According to the German American Business Outlook 2018 – an annual survey conducted by the German American Chambers of Commerce in the United States, the Representative of German Industry and Trade and KPMG – all of the surveyed German companies were expecting growth for their businesses in the US for 2018. At the same time, 76 percent of German companies operating in the US found that open markets are crucial to their supply chain.

A recent survey conducted by the American Chamber of Commerce among its member companies also underlined the strong economic ties with the US, with 82 percent of the companies surveyed considering the daily economic relations between the EU and the US to be at least as strong. At the same time, 42 percent of German companies said that the US had become less attractive as a business location, mainly because of the current trade dispute between both countries.

There is also an indication that investment activity is declining. Eighteen percent of German companies said that they scaled back their respective investments plans due to the emerging trade conflict. The Trump-Juncker plan has not yet spread optimism. In total, 71 percent of the surveyed companies do not believe that there will be a substantial breakthrough between the US and the EU.

German business is not a threat to US national security; and Germany does not trade unfairly. Quite to the contrary of President Trump’s criticism, German business contributes to economic growth, well-paid jobs as well as education and training in the US.

German and US companies are among the most important foreign investors in each other’s markets. German investors have purchased assets worth $310 billion in the US (FDI stocks 2017). That is 7.7 percent of all foreign investments in the US. Within the last decade (since 2008), German investment stocks in the US have thus increased by 78.4 percent, while 38 percent of the German FDI stocks in the US are invested in sectors that can be attributed to industry, most notably the transport sector (15.2 percent), the chemical industry (8.5 percent) and the machinery industry (4.9 percent).

German companies employ some 674,000 people in the US. That makes Germany the fourth most important foreign employer in the US, after the United Kingdom, Japan and France.

President Trump has repeatedly criticized Germany’s trade surplus, in particular in trade with automobiles. This does not pay due respect to the German car industry’s contribution to the US economy. While in 2009, Germany exported more cars to the United States than were locally manufactured by German companies, in 2017, more than 800,000 German cars were produced in the United States. The US imported 493,000 cars from Germany in the same year. Since 2009, German production in the US has increased fourfold. 60 percent of American-made German cars are exported. Two of America’s biggest car exporters are German companies – BMW and Mercedes. The US is the premier destination for foreign direct investment by the German car industry.

The skill gap is a major obstacle when it comes to future investment in the United States. According to the German American Business Outlook 2018, 87 percent of companies report that they “always,” “very often” or “sometimes” have difficulties finding skilled employees in the US. German companies, together with chambers of commerce in numerous states in the US, have thus started to establish apprenticeship programs in various professions, though mostly in the technical area – e.g. for mechatronics technicians and industrial maintenance technicians.

Applying the dual education system in the US is no small task, as apprenticeships are often considered a dead-end career path mainly for crafts and trades. Many Americans believe there is no alternative to a four-year college education if they want to find a decent, well-paid job.

However, choosing an apprenticeship over a college education has its advantages. Instead of having to take on debt to finance their education, as is common for college students and their parents, apprentices already receive pay, as they are being trained and work simultaneously. Many successful apprentices even have a job guaranteed to them after they finish their program.

There are two main apprenticeship programs being run by the chambers of commerce – one in the Midwest and one in the South. The Trump administration has expressed great interest in learning more about the German system and applying it in the US. With all the conflicts burdening the bilateral relationship, education and training is a prime area for cooperation.

The contribution of German companies does not stop there, however. Many companies heavily invest in their local communities. Take BASF Corporation, which employs around 15,500 people in the US and, for example, offers different science education programs designed to awaken the interest in children and prospective students to pursue careers in science, technology, engineering or mathematics (STEM). In partnership with Farleigh Dickinson University, BASF hosts a two-week science academy that offers students from across North America the opportunity to increase their knowledge of chemistry. And the BASF Kids’ Lab introduces children to chemistry through hands-on learning experience.

Besides running an apprenticeship program, the German company Siemens established the Siemens Foundation in 1998. The company has invested heavily to advance STEM-based workforce development and education. The list could go on. With their engagement on a variety of issues, German companies not only contribute to long-term economic growth but are also strongly committed to fostering social prosperity and demonstrating social responsibility in the US.

Germany and the United States are indispensable political partners. The EU must counter trade measures that do not conform with the rules of the WTO. At the same time, the trans-Atlantic relationship needs a positive agenda. One key aspect is the negotiation of an EU-US trade agreement. A new agreement must meet the requirements of a modern trading partnership and abide by the rules of the World Trade Organization.

Stormy-Annika Mildner
is head of the External Economic Policy Department for the Federation of German Industries (BDI). 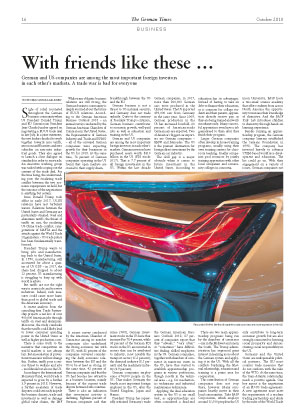