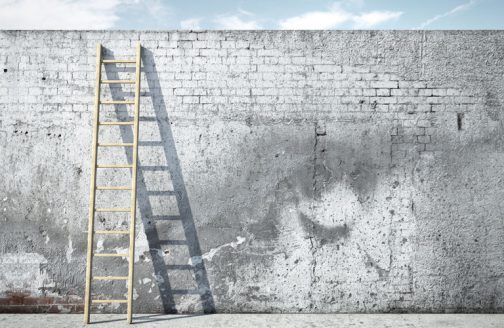 On Dec. 10, 1948, shattered by the horrors of World War II, the international community adopted the Universal Declaration of Human Rights. Of the United Nations’ 58 member states, 48 voted in favor of the declaration, eight abstained (the Soviet Union and its Eastern European allies plus Saudi Arabia) and two did not vote. The world was far less liberal in 1948 than it is today, and the concept of human rights wasn’t popular with the global public. Nevertheless, it would hardly raise an eyebrow were one to speculate that if the 1948 Universal Declaration came up for a vote in the UN tomorrow, the chances of it being approved would be very slim.

In 1948, the liberal order was a normative horizon; today it is a contested hegemony. The assumptions on which the liberal order rests are being challenged intellectually and politically by states within and outside the West.

Illiberal states like China and Russia contest the West’s domination, but do so by violating the rules of the liberal order rather than by offering a well-articulated normative alternative. What is more, when it is in their interests, illiberal states position themselves as defenders of international institutions and global goods instead of offering alternatives to them. The support of China and Russia for the Paris Climate Agreement, for the World Trade Organization and for the Global Compact for Migration in the face of US opposition are cases in point.

At the same time, liberal norms are being challenged within Western societies by rising populist parties and especially by the Trump administration, which has defined America’s commitment to the liberal order as the country’s major vulnerability in the modern world. Once the liberal hegemon, the US has decided to preserve its power by overthrowing the liberal norms on which its hegemony was founded.

Through the increasing passion and frequency of their attacks on the West for unbearable hypocrisy, illiberal political leaders in Russia and elsewhere have been sending a clear signal to their populations about the revolutionary change they represent.

What are the sources of this all-powerful hypersensitivity about hypocrisy? Is the problem power asymmetries that make relatively less powerful states and societies particularly sensitive to the big boys breaking the rules? Is it the tendency of the US and the EU, more so than any other global powers, to regularly invoke universal principles to justify their conduct of foreign policy?

Finding answers to these “hypocrisy questions” is critical, because the accusation of hypocrisy is the most effective strategy for de-legitimizing the current liberal order –bearing in mind that there is no other set of normative ideas able to challenge it at the moment.

The hypocrisy of Western leaders – lecturing the world about high-minded values while actually being motivated by selfish geopolitical interests – has become one of Russia’s gnawing obsessions. The so-called “liberal international order,” in Moscow’s view, was nothing nobler than a projection of America’s will to dominate the world. Western universalism was just a false front for Western particularism. America, in particular, disguised the enlargement of its sphere of influence as an expansion of the frontiers of freedom. What the West celebrated as popular democratic revolutions were simply West-sponsored coups d’état.

In her remarkable book Ordinary Vices, the American philosopher Judith Shklar insists that we should not be so harshly critical of hypokrisis, for it is a necessary element in any liberal society, in any society that talks values. In her view, it is also an unattractive but unavoidable feature of international relations. At the same time, criticizing hypocrisy is also tricky, because in politics it is almost impossible to criticize hypocrisy without falling into the trap of playing the part one is also criticizing. While anti-hypocrisy rhetoric has its legitimate arguments, it is one of our major findings that the weaponization of anti-hypocrisy rhetoric is partially responsible for the current miserable state of international affairs.

By focusing on the West’s hypocrisy, Russia has fatally eroded the trust between Russia and the West. In the Kremlin’s view, hypocrisy is the skeleton key for unlocking Western foreign policy.

Alternative explanations for the West’s failures to live up to its own ideals – such as poor planning, muddling through, naïveté, self-deception and lack of coordination on the Western side – are strategically downplayed in order to underscore America’s principled bad faith. Unmasking hypocrisy implicitly attributes malicious intentions to the adversary. Distinguishing public justifications from hidden motivations is only common sense. But focusing dogmatically and obsessively on this distinction, as Russia seems to do, makes it impossible to arrive at any sensible policy directed at reducing tensions and re-building trust between Russia and the West. We recently heard similar fixations on Western hypocrisy coming from Turkey, China and Brazil.

By relying on the exposure of an enemy’s hypocrisy to justify one’s own aggressive acts, one can attack the existing world order without offering any positive alternative. But this is not a formula for a sober foreign policy based on proper understanding of the actions and motivations of the other side. Instead, it increases the risks of dangerous accidents.

What should be the policy of any state actor that wants to preserve the normative power of the liberal values in a world in which illiberal great powers have weaponized “Western hypocrisy”? How should the EU act and talk in such a situation, keeping in mind that it as a post-national political project depends on the existence of the international liberal order and that liberal internationalism and multilateralism is the EU’s mother tongue? And how should the EU react to the escalating accusations of hypocrisy any time someone dares to speak about values?

The strategy most popular with European leaders today is to ignore the illiberal turn, to treat it as an aberration and wait for America to make a U-turn back to its liberal self once Trump is out of office, and to bet on the exhaustion of the attractiveness of the illiberal actors.

This strategy is a risky one. We have many reasons to believe that even after Trump leaves office, the US will not embrace its former role as the leader of the liberal world and the guarantor of the liberal system. And even more importantly, the US would face many constraints in playing this role.

As indicated in a recent survey commissioned by the European Council on Foreign Relations (ECFR), the US is perceived as a security threat rather than as an ally by a sizable segment of European societies. It is also questionable how liberal the post-populist governments in the different parts of the world will be. The failure of populism does not automatically mean victory for liberalism.

The only way for the EU to survive as a liberal actor in an increasingly illiberal environment is by transforming itself from a missionary who wants to shape the world in his own image into a monastery focused on protecting the very exceptional nature of its political project.

When the EU raises human rights issues in its conversations with China, it should make its expectations clear: it is not trying to change China’s attitudes, but instead preserve the EU’s own exceptional nature. In this sense, China’s behavior in the first post-communist decades could be an interesting model to follow. China accommodated itself to many of the global trends that shaped the post-Cold War world, but it defended the role of Marxist language and the Communist Party as the way to preserve its state identity. In the post-communist decades, China acted with the full awareness that some of the assumptions in which it had believed had turned out to be wrong, but at the same time it made Chinese communism the defining characteristic of its exceptionalism. The EU should do the same regarding liberalism.

In other words, if until now the EU was very much colored by the idea of the universality of its values and institutions, in the future it should sharply stress its exceptionalism. If before it was proud of the undefined nature of its borders, now it will have to fix its borders. The distinctive nature of a monastery is that while it hopes to influence the world beyond its door, it is aware that it lives in a different normative space than the outside world. It is insulated from the world, and there is a clear border between being inside the monastery and being outside of it. To focus on the exceptional nature of the EU is the only strategy that would sustain the internal cohesion of the union while at the same time acting as an alternative to growing illiberal trends. Brussels’ new climate agenda is also an opportunity for the EU to re-invent its soft power and to stress its belief in multilateralism.

The EU should define itself as a monastery within the world of sin, a monastery that is economically and even militarily powerful enough to preserve its autonomous role and way of life, but one that tries to transform others only through the example of its very existence. And it should refrain from succumbing to desperation, for every monastery is a missionary in waiting.

Ivan Krastev
is a fellow at the Institute for Human Sciences in Vienna and the Richard von Weizsäcker fellow at the Robert Bosch Foundation in Berlin. He is a founding board member of the European Council on Foreign Relations, a member of the board of trustees of the International Crisis Group and a contributing opinion writer for The New York Times. His piece is based on the research project on hypocrisy that Krastev initiated and led at the Robert Bosch Academy. 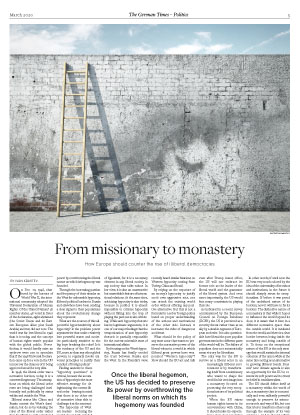