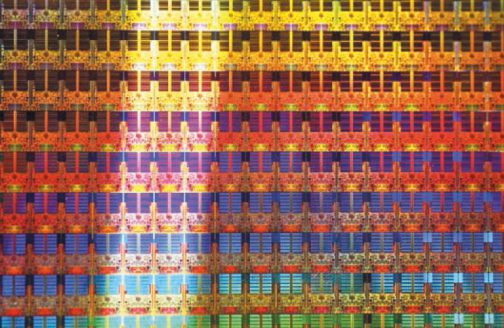 The self-driving cars of the near future depend on precise digital geolocation data to navigate the urban jungle and arrive at their destinations. Here, a multinational company with offices in Berlin, has developed one of the best online mapping services currently available. Its mobility expertise is so sought-after that German carmakers BMW, Daimler and Audi have invested some €3 billion for access to Here’s navigation data to help steer their vehicles.

It’s a remarkable innovation story. Back in 1999, Gate5, the forerunner of Here, was a small startup firm in Berlin’s Prenzlauer Berg district. For six years, its software specialists continued to refine their navigation tool before attracting the attention of telecommunications heavyweight Nokia, which bought the company and its 70 staffers. Here now employs 6,500 people, about a thousand of which are in Berlin – and has become legendary in the German capital’s startup scene.

Not every innovation is successful. In fact, few are. Only one startup in ten really gains traction, says a rule of thumb among venture capitalists. Eighty percent vanish from the market within three years. In searching for and promoting innovation, investors and policymakers setting up the framework need a sixth sense for winners. That goes both for startups and R&D facilities in the private and academic sectors.

Some failed projects continue radiating a kind of phantom pain through the sector for decades. When Germany’s Federal Minister for Economic Affairs and Energy Peter Altmaier recently unveiled plans for a disruptive innovations agency, he recalled the debacle of MP3 technology, which was devel­oped at a Fraunhofer Institute in the German city of Erlangen in 1982 but only became a money-spinner in the hands of US and Asian music streaming services. German-based innovation has a Janus face: strong creativity on the one side and serious marketing deficits on the other. A new innovation policy is supposed to change that.

Evaluations and corporate reports generally give Germany good marks for innovation. R&D spending in the country has steadily risen since the 1990s, according to a new government report. In 2016, the public and private sectors invested more than €92 billion in basic research and practical inno­vation. Germany’s R&D intensity – the percentage of GDP devoted to research and development – came in at 2.93 percent. “Germany thus ranks among the top ten of the world’s most research-intensive countries,” according to the Ministry for Education and Research.

The average R&D intensity of the 28 EU member states in 2016 equaled 2.03 percent, according to latest estimates. “Within the EU, only Sweden and Austria attain a higher R&D intensity than Germany,” the report says. Spending is expected to cross the 3-percent threshold this year.

Germany’s transition away from fossil fuels, known as the Energiewende, has thrown open the gates to broad usage of renewables including solar and wind power. The cornerstone was laid by the country’s Renewable Energies Act, which subsidizes green electricity and guarantees it preferred status for being fed into the power grid. To be sure, Germany’s solar power industry has suffered from tough international and especially Asia-based competition. Yet innovative companies have established themselves in niche technologies that continue to expand on international markets.

They include the Berlin company Younicos, a provider of smart energy and grid solutions based on battery technology. The firm is currently busy converting the Azorean Islands’ power grid to 100 percent renewable sources. The key lies in storing solar elec­tricity to make it available at night. Founded in 2005 and now with a staff of 120, Younicos has installed more than 20 battery systems with a combined output of nearly 100 megawatts.

Battery technology is also one of twelve primary missions of the “High-Tech Strategy 2025” that the German government launched early in September. “We support the construction of autonomous capacities in battery cell production to secure technological sovereignty and maximally exploit the battery value chain,” the seven-year innovation initiative pledges. “We will continue to push battery research forward and accompany consortiums with suitable support programs through to the establishment of battery cell production,” the government says. The driving force is the growing market for electric cars, and the goal of con­tinuing to build their motors in Germany in the future.

Research activities surrounding the High-Tech Strategy will be articulated in six “core social challenges” and twelve “missions,” says Research Minister Anja Karliczek. These include the fight against cancer, putting urban and rural life on par with one another and creating less plastic waste. The 66-page paper identifies the “grand challenges” in health care, sustainability, mobility, cities and the countryside, security and the economy. The government plans to invest €16.8 billion in the High-Tech Strategy this year.

Berlin sees the strategy “providing orientation for the people, pointing out new perspectives and raising confidence and curiosity in the future,” Karliczek said when unveiling the initiative. Research and innovation should help attain “substantial improvement in the living quality” of all citizens, she added.

One novel aspect of the High-Tech Strategy is its stronger emphasis on transfer between academic research on the one hand and the private sector and society as beneficiaries on the other. All sides agree this process must be greatly accelerated. The new instruments are agencies for disruptive innovation in the civil sector and for cybersecurity. “Young, highly innovative future clusters” in research and “experimental spaces” for social innovation are targets for the funding.

One vital aspect of growing innovation is its acceptance by society. In this respect, the average German is not nearly as tech-averse as is generally thought. The rejection of nuclear power and genetic technologies appears to be an exception, according to a new study called Technikradar by the acatech Academy for Technical Sciences and the Körber Foundation. The representative interviews with 2,000 citizens by the Center for Interdisciplinary Risk and Innovation Studies at the University of Stuttgart (ZIRIUS) make it the largest empirical investigation to date on German society’s relationship with technology.

Generally speaking, Germans have a fatalistic attitude toward high tech. More than 89 percent of those surveyed said they were con­vinced that technological progress cannot be stopped. Yet that does not mean that improvements are always the result, people believe. Over 60 percent feel that, as progress advances, it brings with it growing restrictions on the individual. This actually nourishes the willingness to get involved – not to reject technology, but to shape it. Sixty-eight percent of those surveyed by Technikradar expressed the demand that citizens have the right to help decide the future of controversial technologies.

The poll also revealed some ambivalence. Only 24.6 percent of those surveyed believed that the use of technology solves more problems than it creates. And, less than a third (32.9 percent) think that challenges such as hunger, poverty and climate change can be tackled with the help of technol­ogy. On the other hand, the project’s scientific director, sociologist Cordula Kropp of ZIRIUS, found that nearly half – but men more so than women – believe “that technology will improve the quality of life for future generations.” Germans have varying attitudes toward individual technologies. “Regarding the use of robots to help ease the burden on caregivers, expectations are reserved but substantially more positive on using renewable energies to fight global warming,” Kropp adds.

One striking aspect of the study is the high importance given to socially embedding new technologies. In concrete terms this was investigated in the cases of digital transformation, autonomous driving and the smart home. It found that Germans regard digitization and its effects with mixed feelings. For example, Technikradar found that “the majority expects a rise in comfort (54.4 percent), but also fears losing control over its own personal data (60.6 percent). The overwhelming majority (80.8 percent) believes the use of caregiving robots would leave people in need of nursing care with less human attention. Nearly 53 percent fear that in the future only the affluent will be able to afford nursing care by humans. Germans are even more skeptical toward autonomous driving: a mere 18 percent consider self-driving cars reliable.”

Körber Foundation chairman Lothar Dittmer believes this means that what really matters to Germans is not the technology itself, but “how it is embedded in society – the goals it seeks to attain as well as the effects of its use.” Technikradar seeks to contribute to this “urgently needed debate over the status, shaping and regulation of technological innovation.” The survey is “designed as a long-term early warning system” to recognize undesirable developments through technological change in a timely manner. “Ideally we would support innovation processes in a way that would bring products and technologies into line with the expectations of those who would use or be affected by them,” adds Ortwin Renn, scientific director of the IASS Potsdam and executive board member of acatech.

This assessment is also reflected in an initial evaluation by Peter Dabrock, a professor for systematic theology at the University of Erlangen-Nuremberg and chairman of the German Council on Ethics: “Germans are not technology averse. They have an open relationship with technology without succumbing to technology euphoria.” Technology developers must also come to terms with this disposition, he added. “Only once research and the corporate sector maintain a sensitivity to their social and environmental responsibilities will the German people award them their deeper trust,” Dabrock says. This trust is “not given blindly” and must constantly be earned anew. He concludes: “If the research and corporate sectors succeed in gaining this trust, German society will provide a solid – which in no way means uncritical – framework for high tech to flourish.” 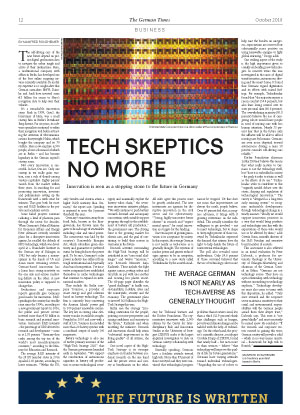