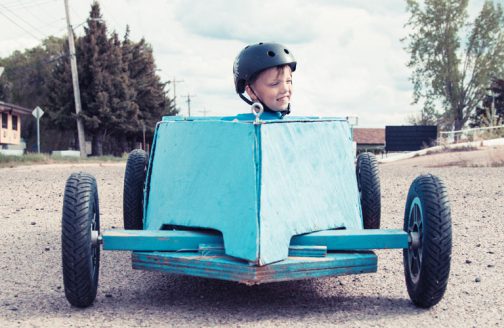 There are increasing fears that Germany’s automotive industry will not be able to master the problems it faces in the future. Some experts even claim that the demise of this paragon of industries – along with its suppliers and more than 800,000 employees – is imminent, arguing that the hurdles ahead are simply too large. To make matters worse, most of the leading managers at Audi, BMW, Daimler, Bosch and others are acting as if they’re in a deep sleep. Experts argue that their behavior is simply too slow and risk-averse.

For example, company heads are already stonewalling in unison on the question of whether or not battery cells should be “Made in Germany,” a question that has been sold as the fulcrum determining the fate of e-mobility. These managers continue to argue that battery cells – which form the very heart of electric cars – can be obtained faster and more affordably from innovative factories in the Far East. Does this mean that the cars of the future will soon be made in Japan, South Korea and China? Will Germany lose one of its most important industrial pillars to a simple act of omission?

These concerns are by no means exaggerated. Since the 1960s, Germany has seen the loss of a dozen sectors in which the country was previously among the world’s leaders. The dying-off began with the leather and fashion industry and was followed by the manufacturers of motorcycles (NSU, DKW, Zundapp, Kreidler), cameras (Zeiss, Agfa, Leitz) and watches (Kaiser, Kienzle, F. Mauthe and, in part, Junghans). In the 1980s, all of the big names in German consumer electronics (AEG-Telefunken, Grundig, Bosch-Blaupunkt, Saba, Dual, Nordmende, etc.) and in computer and office machines (Olympia/AEG, Triumph-Adler, Mannesmann-Kienzle, Nixdorf) stumbled and fell. In the 1990s, the decline could be seen first among manufacturers of communications and telecommunications technology (AEG/TN, ITT/SEL/ Alcatel, Detewe, Siemens, Tekade) and ultimately among all German mobile phone manufacturers from AEG to Bosch and Siemens. In the past decade, the rapid collapse of the solar industry – which was simply overrun by the Chinese – was largely the result of errors in political decision-making.

After that, all that remained of tens of thousands of jobs and hundreds of factories were fading brands and very few jobs in Germany. In fact, Germans have barely a presence today in the worlds of tablets, smartphones, fully digital telecommunications, solar cells and the like.

This somewhat terrifying glance at Germany’s recent past proves that the factors of size, intermittent market dominance and well-known brand awareness are not enough to save companies from a full downward spiral. In fact, stories relating to the decline of entire industries reveal one recurring pattern in particular, most aptly described as a complete lack of strategic thinking and global overview on the part of the company’s management. In many cases, their ability to think proactively reached only as far as their nearest domestic competitor or other Western competitors. This limited scope of vision led them to barely notice the strategies being pursued by those aggressive and emerging challengers further away on the horizon.

The biggest turning point began in the mid-1970s with the transition from labor-intensive analog technology to digital systems drawing on software and IT specialists. While German managers held on far too long to their beloved mechanical and electrical engineering, newcomers in Asia set their sights on market-dominance through the digitalization of their innovations; the result was affordable and durable mass-produced commodities on a global scale.

Today, millions of cameras, watches, computers and mobile phones are manufactured and sold worldwide. This is far more than the number of goods produced when Germans gave up and walked away from these industries. At the time, many German companies allowed themselves to be forced into niches based on misguided price-performance policies – which were too expensive and too unimaginative – and they eventually atrophied. This fate is now also looming over German carmakers.

More than 100 million cars are sold worldwide every year. And more and more cars will most likely be built in the coming years. The only real question is where and by whom? Today, the VW Group sells roughly 10 million vehicles across the globe, with Mercedes-Benz Cars and BMW selling around 2.5 million each. In other words, from a global perspective, the Germans are already more like dwarves than giants. What will happen if Chinese auto giants start rolling onto the world market, just like they did with mobile phones and solar cells? Either way, China’s communist party and Chinese taxpayers are ready and waiting.

And where is Germany’s auto elite? The leaders of the major companies, usually merely managers for hire, are themselves often the problem in the carmaking business. They like to copy one another and enjoy buying and selling companies like sacks of potatoes. What they all seem to lack is an entrepreneurial gene. Instead of rolling up their sleeves and taking the reins – for example on the question of whether or not battery cells should be made in Germany – they hesitate and continue their drowsy sleepwalk, thereby fully overlooking the inevitable global market of cars for buyers with limited spending power – the future “car of the people.”

There is already a worldwide trend of seeing cars as a necessary evil, rather than as a status symbol. In large urban areas, roughly one in three residents (up to the age of 35) say that they would have no problem living completely without their own car. This is why carsharing is now an alternative with a bright future. While the Volkswagen Group continues to make very little use of this opportunity, Daimler (car2go) has become a global pioneer in the field. However, as carsharing is not yet a profitable area of business, Daimler and BMW are now pooling their activities, which is exactly the right path forward for strategic behavior and, hopefully, for falling prices. “Mobility a la carte” should be the affordable offer for all people on the go.

The pursuit of this option calls for both new organizational products – rental bikes, special apps, links to trains, buses and taxis – as well as high-end technical solutions. And the latter must be carried out in a way that is both feasible and affordable to masses of people. Unfortunately, this is a balancing act that German engineers, in particular, aren’t very good at; instead, they prefer to develop “technological pipe dreams” that zoom straight past the market.

In the past, this was often the cause of the death of industries – from watches and cameras to PCs and mobile phones. In order to avoid this fate, companies must let the needs of the buyers – and their wallets – be their guiding principle. Giants like Ford, Toyota and VW (the “Beetle”) used this simple recipe to lay the foundation for their global success. For Volkswagen, the battle for customers most certainly involves a significantly higher number of mass-produced commodities at affordable prices than it does for Mercedes and BMW.

Simply put, auto managers have to do more. As it is, they already have enough technical challenges to deal with. In the coming years, mobility will have to be reinvented multiple times. Traditional drive systems – diesel and gasoline engines – will probably be in demand for a couple more years, which means that there is time to develop alternatives: a purely electric vehicle for metropolitan areas, medium- and long-distance hybrid vehicles with combined drives for electric, gasoline and gas as well as – hopefully in the near future – hydrogen-powered fuel cells.

Let’s not forget that Daimler was already a pioneer in this area 20 years ago. The company’s cooperation with BMW on the development of this drive technology is a good sign. Equally meaningful would be additional research partnerships in Germany as well as with companies abroad. The development of autonomous driving alone is set to devour billions of research dollars in the near future. Plus, there is much work to be done on new engine concepts, on multiple electronic assistance systems, on lightweight construction (new materials) and on customer-friendly mobility solutions. All of these require suitable infrastructures for charging batteries, for gas and hydrogen refueling, as well as for cross-network IT and navigation systems to control and test the autos of the future.

At this point, it should be obvious to anyone that the sheer number of major tasks involved cannot be handled by one manufacturer alone. Shared work in research labs means twice the profit, that is, fewer costs and better and faster results. A commitment to only one alternative drive – as VW seems to be planning with its focus on electric mobility – simply makes no sense. In addition, companies would do well not to curtail the fantasy and imagination of their researchers. In other words, Daimler and BMW – and even Porsche, to some extent – would be well-advised not put any limits on the creativity of their best minds.

Are German carmakers facing the same downfall as the abovementioned industries? If BMW, Daimler and VW were to cooperate even further – with their suppliers, too – and take a closer look at their clients, their competitors in the Far East, especially China, would find it more difficult to gain ground. This means that corporate heads need to fight more for their domestic operations.

This also applies to the job situation in factories, offices and labs. Indeed, there is no longer any doubt that technical progress and the transition from electro-mechanics (combustion technology) to e-mobility is going to cost tens of thousands of jobs. The incontrovertible fact is that an electric car requires roughly one-third fewer parts.

And then there is that other job killer, namely the ongoing digitalization of cars themselves as well as the rationalization of factories and offices. This process of replacing humans with machines is likely to lead to massive conflicts with workforces and unions. How many jobs will become superfluous in the medium term? 250,000? 400,000? Or more? We cannot make any accurate predictions at this time. The result depends primarily on how many new products companies can bring successfully to market and how high the added value (the company’s own work share) will be in the overall system of cars Made in Germany.

Things are now in the hands of the top managers at BMW, Daimler and VW. It is their task to remain an illustrious part of the automotive world in the future. Indeed, without the industrial production of cars in Germany itself, the BMW, Mercedes and VW brands would lose their charm. In other words, they would face the same fate of all faded world brands: second-class status. 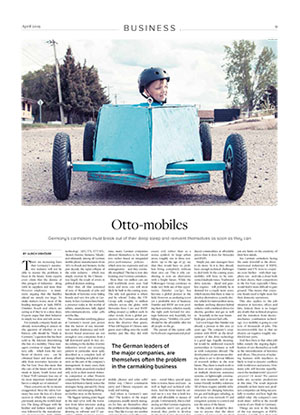