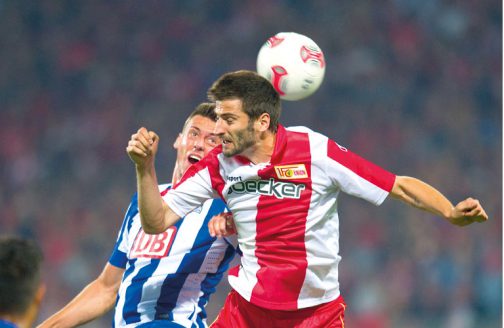 This summer, two major events caused a sensation in the world of soccer in Berlin and throughout the country. First up was the fact that 1. FC Union, the eternal second-division club from the eastern Berlin district of Köpenick, finally made it to the Bundesliga, thus becoming the second Berlin team in the league’s top tier. The citywide celebrations surrounding the ascent of the “Unioners” were almost as euphoric as FC Liverpool’s triumphant revelry after winning the Champions League. In Berlin, the jubilation lasted for days, with a procession of ships on the River Spree marking one of the emotional highlights.

The second event took place over at Berlin’s other Bundesliga team, Hertha BSC, where the 127-year-old club – German champions in 1930 and 1931 and the undisputed top team in Berlin’s soccer universe until now – celebrated a financial coup. The club announced that it had successfully attracted entrepreneur Lars Windhorst, 42, as a new investor and strategic partner. Celebrated as a Wunderkind during the era of Chancellor Helmut Kohl (CDU), Windhorst has founded both successful and unsuccessful companies and always managed to land on his feet.

And now, with the help of his global investment firm Tennor Holding B.V., Windhorst was set to fill Hertha’s coffers with €125 million, acquiring in return a 37.5-percent share in Hertha BSC GmbH & Co. KGaA. Windhorst is eager to finally make a “big-city player” out of Hertha, he argued, perhaps as big as Paris Saint- Germain and Arsenal in London. It’s an ambitious goal – and most likely still a long way off.

And yet: Does this mean that Berlin is on its way to becoming a globally recognized and respected soccer city on par with Madrid, London and Milan?

At least the first step has been taken. This Bundesliga season marks the first time in 43 years that the capital has two teams playing in the top league. The last time that happened was in the 1976/77 season, when Hertha BSC and Tennis Borussia were among the national elite, of course both from the west side of the city.

Today, however, the cross-town duel is between 1. FC Union, a highly popular club from the east side of Berlin, and Hertha BSC, an old stalwart once based in the worker’s district of Wedding and most recently anchored in the bourgeois western district of Charlottenburg. In other words, these are two clubs with highly different origins, histories and messages.

From 1961 to 1989, both clubs went through different phases of existence in a city divided by the world’s most famous concrete wall. The teams were often sympathetic toward each other, sometimes paying little attention to one another, and on occasion had an active mutual dislike for the other. Today’s dynamic is shaping up to be a healthy rivalry.

To be sure, there is a great deal of symbolism in that fact that this season – 30 years after the fall of the Berlin Wall – the two clubs will play against each other twice in the top-tier Bundesliga. This has never happened before.

The first cross-town derby will take place in November at the Alte Försterei, home of 1. FC Union. This event will no doubt electrify the capital.

When that day comes, there is one famous photo almost guaranteed to be printed in many newspapers. The photo shows the historic handshake between two professional soccer players, Union captain Olaf Seier and Hertha captain Dirk Greiser, at the “reunification game” at Olympic Stadium in January 1990, which Hertha won 2:1. On that day, over 51,000 fans from both clubs celebrated their teams and themselves in the stands. The Berlin Wall had fallen only a couple of months prior and the entire city was in a state of both chaos and euphoria.

Seier, who is now 60, recalls that moment with a smile: “It was a very big event in my life, truly the fulfillment of a dream. For the very first time, I was standing on the grass in the huge Olympic Stadium and was just totally amazed at the incredible panorama. At the time, I had to ask myself: Is this real or am I dreaming?”

Greiser, who is now 56, also has fond memories of the day: “For me, it was quite an extraordinary and moving experience at a very turbulent time. We were able to get to know the players from Kopenick and really enjoyed playing the game together.”

Until today, Hertha BSC saw itself as the biggest and most important soccer club in Berlin, a self-image it has enjoyed since the 1920s and 1930s. After all, the team under club icon Hanne Sobek managed to reach the finals of the German Championships six years in a row, and on two occasions was victorious. Since those glory days, the club has experienced a number of major breaks and fractures, much like the city of Berlin.

The people most affected by these events were the fans themselves. While the Berlin Wall still stood, Hertha lost many of its fans from the east of the city, who had to watch West Berlin television if they wanted to watch their team.

Hertha fans showed as much solidarity as they could with the fans of 1. FC Union, a club many saw as an underdog in the GDR’s upper league. Indeed, Union’s greatest foe was BFC Dynamo, the Berlin-based soccer club that enjoyed state support and pampering from East German security forces. Hertha fans often traveled to the Alte Försterei in the east to shout defiantly and in unison: “Eisern Berlin!” (Iron Berlin) and “Es gibt nur zwei Meister an der Spree – Union und Hertha BSC!“ (There are only two champions on the Spree, Union and Hertha BSC). For West Berlin fans, the trip to Köpenick was certainly an adventure, a thrill ride of sorts. It was a journey into another world. Both fan groups espoused a joint dislike and rejection of state restrictions, which was likely an important impetus for the teams’ nascent fan friendship.

In turn, Union supporters made their way to Hertha games in socialist countries, that is, to international duels in Prague and Plovdiv, where they joined with their Hertha friends to form an ideologically diverse yet athletically unified wave of support. This occurred, for example, in 1978 and 1979, when Hertha made it to the semi-finals of the UEFA Cup. But the peak of the Hertha-Union fan friendship came in April 1978 at one of the so-called German-German encounters, in this case Dynamo Dresden hosting Hertha Berlin for a test match. Long convoys of East German Trabants and Wartburgs set off on highways to Dresden. East Berlin fans, many of them followers of 1. FC Union, were eager to catch a glimpse of Hertha BSC. In May 1979, there was a return leg at Olympic Stadium in Berlin. Dresden won both bouts by a score of 1:0.

In many ways, the two fan groups were never as close as during the era when the Berlin Wall stood firm and seemingly eternal. Indeed, only a few months after that big match at Olympic stadium in January 1990, the alienation began. East Berlin soccer fans became preoccupied with things bigger than soccer. They were struggling with new social demands and “forced to learn the world anew,” says one Hertha fan, who still has friends at the Alte Försterei.

Union has started displaying a great deal of confidence, and rightfully so, beating the top team Borussia Dortmund in just their second game in the Bundesliga in late August. The club is riding a wave of euphoria from its rise to the top league. In the past two months alone, the club has registered thousands of new supporters, and the association now has a good 31,000 members. At the Alte Försterei, they continue to project the image of a “somewhat different club” – one that resists what they see as the total commercialization of the sport. We’ll see how far this approach takes them in the hard-hitting world of big-money professional soccer.

In contrast, Hertha BSC, which currently comprises 36,500 club members, is performing that difficult balancing act of managing modernity and tradition. They certainly want to defend their status as the number one club in Berlin, and to win both of this year’s derbies against Union.

The two team captains from 1990, Olaf Seier and Dirk Greiser, are looking forward to these two soccer encounters. In recognition of his services to Union, Seier has the privilege of a season ticket for life, which means he’s certain to be watching from the stands. Greiser likes to talk of a “healthy rivalry in a big city,” claiming: “The most important thing is that both clubs meet one another with respect.” Let’s hope this cross-town esteem is the prevailing sentiment for the season, regardless of who wins the derbies.

Michael Jahn
covered Hertha at the Berliner Zeitung for more than 20 years. He now writes a column for that newspaper under the name Ha-Ho-He, a popular Hertha club chant. 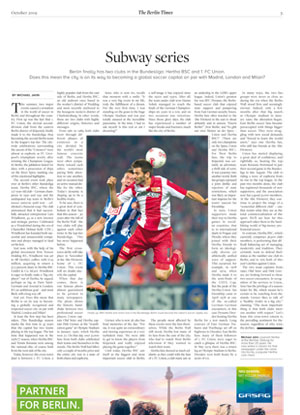