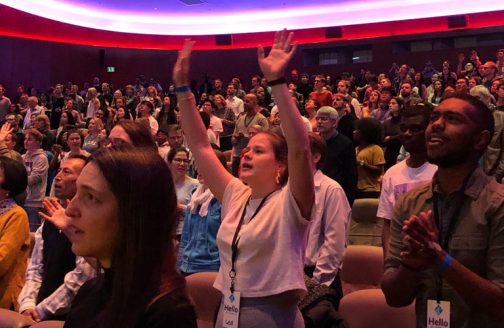 Considering the ecstatic faces and exhilarated cheers emanating from the masses of people gathered in front of the Zoo Palast, one would be forgiven for thinking a movie star were visiting the venerable old cinema and hot spot of the Berlin International Film Festival. “Rick! Over here! We love you! Rick!” Rick Warren is indeed a superstar. Even Barack Obama once offered the Evangelical Christian pastor a chance to say a prayer at his first inauguration in 2009.

According to The New York Times, the founder of the California-based Saddleback Church is among the 100 most influential people in the US. His organization, founded in 1980 in Lake Forest, a city in Saddleback Valley, has more than 40,000 members, making it one of America’s megachurches, with branches in Hong Kong, Manila and Buenos Aires. For six years, Saddleback has also had a congregation in Berlin.

On this occasion, the boss is coming in person for his corporation’s birthday. Only seldom does he travel outside the US, so the Berlin branch is celebrating his visit with an extra dash of élan. And Warren is playing his role of gracious patron to a tee.

“What’s your name? Gimme a hug. God bless you!” Like a big clumsy bear, he struggles to make his way through the crowd, hugging anyone he happens to touch. “You just can’t pull yourself away from him,” says a young man, laughing and almost throwing himself on Warren’s broad shoulder. “I’ve got you! Don’t worry!”

Warren shakes hands, laughs heartily and makes contact with anyone willing. It takes more than a half hour till he finally makes it to the packed cinema. Almost 1,000 worshipers are there. They stand up, clap and wave as Dave Schnitter takes the stage. “Hey guys, welcome, my name is Dave, I am the pastor here in Berlin and it is such a joy to have our senior pastor, Rick …” The rest of his welcoming address is drowned out by cheers.

Schnitter is something like a younger copy of Warren – tall, wide and constantly grinning. It goes without saying that the two men engage in a long embrace when Warren reaches the expansive stage. Standing like two soccer players before a crowd of fans, they suddenly lower their heads and, as if by command, the congregation goes silent.

The service begins with a prayer and then a message: “Jesus loves you!” But he’s not the only one. Warren opens his arms wide: “By the way, have I told you lately that I love you? My favorite Saddleback church in the whole world is Saddleback Berlin!” By now, no one is sitting in their comfy Zoo Palast seats. The young man who just rested on Warren’s shoulder is beaming: “You only get that here.”

Saddleback Berlin is one of the most successful new churches in recent years, and this development marks a trend. For about a decade now, Evangelical megachurches have been expanding their sphere of influence.

Religious studies scholar Martin Radermacher of Ruhr-University Bochum sees Europe, above all, as their goal: “The mission is the principal reason.” The co-editor of the Handbuch Evangelikalismus (Evangelism Handbook) is certain: “Many Evangelical churches are seeing that the number of churchgoers in Europe is declining, and they’re recognizing that we can indeed try to win these people over to the Evangelical church.”

But what exactly does “Evangelical” mean? The term has become increasingly imprecise – and not only in the US. “Evangelical” generally means the – in part – literal interpretation of the bible combined with a believer’s personal relationship to Jesus Christ.

Many Evangelical churches call themselves “Baptist,” “Methodist,” or “Lutheran,” and they are alike in that they are all organized independently from the Protestant church. They enjoy great power in the US, where around 25 percent of all Christians identify as Evangelical. In Germany the estimated share is but three percent, but their numbers are on the rise.

In particular since Donald Trump became president, the “religious right” faction of Evangelicals has grabbed the lion’s share of the spotlight. After all, they comprise the hard base of his presidency, with their chief political goals including the abolition of abortion rights and gay marriage as well as the teaching of creationism in public schools. They’re rallying cry is that America should remain a “Christian nation.”

A “white Christian nation,” adds Rolf Schieder, professor of practical theology at Humboldt University in Berlin. “And Trump has promised precisely that; I will give you a Supreme Court that will work to overturn all the liberal legislation passed in the 1960s. And you have to admit: Trump has delivered.”

Dave Schnitter visibly recoils when hearing the word “Evangelical.” The offices of the Saddleback Church in the bourgeois district of Charlottenburg look a bit like a student café: aged leather sofas, laptops, vibrant posters, the latter bearing the words JESUS LOVES YOU! “Now I’ve said the bad word,” offers Schnitter while emitting a rather loud laugh. “For us, ‘Evangelical’ means that we are true to the gospel. But ‘Evangelical’ is unfortunately also a political word, meaning ‘Trump voter,’ perhaps, or ‘abortion opponent.’” He knows how sensitively people in Germany react to this term. “We don’t get involved. Politics is not a topic for us!” asserts the pastor, whose full beard and cool sneakers are anything but typically pastor-like.

But how does he explain the success of his church, which has gained about 1,000 members in just a few years – especially in a city like Berlin where almost two-thirds of all individuals have no religious affiliation. And of those who do, about 30 percent are Muslim. In fact, Berlin has so many hundreds of various religious and ideological communities – ranging from Ahmadiyya Muslims to Unitarian Christians – that the Senate Department of Culture refuses even to offer an exact figure.

Schnitter leans back and smiles, with a sudden look of supreme self-confidence: “We attract those who want to inhabit their Christian beliefs in a new way. For many people, it can be alienating to sing songs from the 17th century accompanied by instruments from the 18th century on church benches from the 16th century. This is just not at all what we’re about.”

Sunday morning, 10 a.m. For some time, Saddleback Church has rented a happening party location in Berlin-Mitte for its services. Around 300 individuals regularly attend – young families, students, older couples. Everyone is rather casually dressed. Maripili, from Ecuador, came with her German husband and their two kids. “Saddleback is an all-nation church. I feel good here. I can be just how I am.”

Robert, a 50-year-old Berliner, turned his back on the Protestant church, like so many others here: “If the sermon is about Jesus, I really don’t care where I am. The national church is too stiff. People are happier here. People are happy to have contact with Jesus.”

And Pastor Dave Schnitter knows how to warm up his congregation – singing, praying, clapping and dancing. It’s a party atmosphere every Sunday morning, including childcare and brunch after the service. While the message can be somewhat vague, the subtext is always the same: Jesus loves you. “And you are not alone is this big city of ours, not alone with your spiritual need for community,” says Fred, a computer science student.

Saddleback is focused on maintaining a strong connection to congregation members beyond Sunday services. Members regularly meet up in what they call “small groups,” a cooler term for “bible study groups.” But these get-togethers essentially function as such meetings always have. What does partnership mean for me today? How do I raise my kids? How can I be better at my job? “And then we search for what the bible has to say on the matter,” explains Schnitter.

The trick is to engage people precisely where their problems lie – life coaching with a spiritual twist. According to theology professor Rolf Schieder, Saddleback has deftly exported this “American interpretation of religion” to Germany: “Usually, if we’re talking with a friend and he expresses some spiritual quandaries or needs, we would probably recommend seeing a therapist or suggest going out for a beer; for most of us, religious vitality is something we’re critical of. But things are different in the US.”

The appeal that Saddleback seems to exert on the global community in Berlin should not obscure the fact that the congregation is strictly organized according to the principles of the mother ship in the US, where the church subsists on the contributions of its members. In fidelity to the bible, these dues constitute a “tithe” of one’s income.

Saddleback also financed its Berlin affiliate in accordance to the regulations of its “mission concept.” But today, Pastor Dave Schnitter assures us, the Berlin branch is independent – albeit not spiritually. Saddleback can be considered something like a franchise system. And like in any franchise company, central command prescribes the direction its affiliates will take. Every Sunday, the California sermon given by founder Rick Warren is broadcast via video. Dave Schnitter himself does not preach.

For Professor Radermacher, this is a clear signal that the congregations are not independent: “Saddleback is centered around the figure of Rick Warren, a very charismatic individual, a preacher who can mesmerize the people.”

How that works was on display when Warren appeared at Berlin’s Zoo Palast. For one hour he preached about his favorite topic: “We don’t wanna be a boring church of just one nation,” he roared to the crowd. They rejoiced. “God loves diversity. God made about 6,000 beetles!”

The audience was enthralled, including the young man sitting right by the door – he wanted to be sure to hug Warren one more time. Beside him stood his partner. The two men wore their wedding rings. Huh? Don’t they know that as a conservative Baptist, Warren has denounced gay marriage? That he believes firmly in monogamous relationships and in abstinence until marriage? – “Doesn’t matter,” they say.

When asked about this directly, Warren steers deftly around the theme. He knows very well that in Germany, he must alter how he speaks. He explains with a wide smile: “Everybody deserves dignity and respect. I don’t agree with everybody, but everybody is welcome! No matter what lifestyle or gender.” And then there’s one more selfie with the young man and his husband. He’s Rick Warren, the approachable star. His appearance at Zoo Palast pays off for his church in Berlin. After the service, the congregation has won a few dozen new recruits.

Nana Brink
is a Berlin-based freelance journalist for various newspapers and a radio reporter and moderator (Deutschlandfunk). She focuses on global politics, security policy and economic issues. 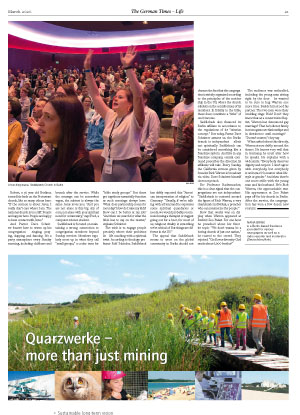