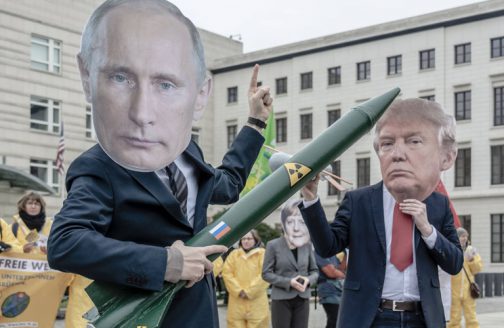 As we move into 2019, a new round of US-Russian nuclear competition – Arms Race 2.0 – is clearly emerging. The risk of nuclear conflict through deliberate action or some tragic combination of mistakes and escalation is growing. While both sides are developing and deploying new offensive and defensive strategic systems, the two governments are taking actions that could lower the threshold to nuclear use.

Amid all of this, political engagement, strategic dialogue and trust have evaporated from this complex and increasingly adversarial relationship. This dynamic not only threatens to undo 50 years of efforts to avoid the possibility of a US-Russian nuclear exchange; it also undermines attempts to slow or halt the spread of nuclear weapons globally.

Despite the crises and close calls, we survived the Cold War without using nuclear weapons. But Arms Race 2.0 is arguably more dangerous in an era characterized by cyberenhanced information warfare and the introduction of advanced capabilities by both countries that could undermine strategic stability.

One special new problem is the extent to which Washington and Moscow have interconnected their own nuclear and non-nuclear command, communication and control systems. This mixing of capabilities, described by analysts at the Carnegie Endowment as “nuclear entanglement,” further increases the risk that conventional conflicts could escalate quickly to the nuclear level through miscalculation.

We will need to be more than lucky to manage this new competition. US and Russian leaders will need to be smarter and more focused than their predecessors to ensure that their efforts prevent any unintended or unexpected event from quickly triggering a more dangerous conflict.

Unfortunately, the toxic character of the current US-Russian political relationship will make this process much more difficult. The latest casualty in the growing freeze between Moscow and Washington is the 1987 Intermediate Range Nuclear Forces Treaty (INF). Adopting the INF agreement banning all nuclear or conventionally armed ground-based missiles with ranges between 500 and 5,500 kilometers marked a critical step in ending the Cold War. Its entry into force ushered in a generation of nuclear transparency and reduction agreements that have served the security interests of both countries and Europe as a whole.

In 2013, Washington accused Russia of violating the treaty by testing and later deploying the 9M729 cruise missile and has now canceled the agreement. Russia, which denies any such violation, has, in turn, accused NATO and the United States of undermining the INF pact by deploying launchers for missile defenses in Romania that can also fire offensive missiles banned by the treaty.

Neither side has shown a willingness to compromise in order to save the agreement and the benefits it brings, although Russia has made some last-minute efforts to at least appear as though it seeks a diplomatic solution. In retrospect, it seems inevitable that the INF Treaty was to be scrapped, to the detriment of stability and predictability in Europe and elsewhere. If INF-range missiles are again deployed in or around Europe, the risk that a crisis or mistake can quickly escalate will further increase.

Europe is an accident waiting to happen. The Nuclear Crisis Group (NCG), an international group of specialists tracking potential nuclear flashpoints around the globe, catalogued in 2018 alone over 170 military incidents between NATO and Russian military forces in the European region that had the potential for serious escalation. Yet the refusal by Moscow and Washington to engage seriously on INF, or more broadly on political and security issues, is a symptom of the growing distrust and animosity felt on both sides of the relationship.

These strains now threaten the entire architecture of strategic arms control. The most recent pillar of this complex structure, the 2010 New START Treaty, limits both Moscow and Washington to no more than 1,550 warheads on 800 missiles and bombers and expires in February 2021. The accord built on its predecessors, including the original 1991 START Treaty that enabled on-site inspections in both countries and created a system of transparency and predictability in strategic nuclear deployments that has lasted for nearly three decades.

For the Trump administration, steeped as it is in the anti-arms control views of its national security advisor John Bolton, arms accords are viewed as a menace. In an environment where Russia is seen as having violated or skirted the limits on several arms control agreements, it is easy to understand how Trump could be convinced to let such agreements die or, better yet, be killed by his own hand. New START has the unfortunate additional stigma in the Trump administration of having been negotiated under Barack Obama, a president whose agreements tend to die painful deaths by Trump tweets.

For Moscow, the picture is more complex, but the INF Treaty, START and New START agreements are seen as legacies of an era when a newly independent Russia was willing to accept what are now seen by the hawks in the Kremlin as one-sided arms control deals. Not only is Moscow developing a variety of new nuclear weapons to counter its perceived conventional inferiority; it also seems ready to walk away from deals negotiated in a period of economic and political weakness.

It is unclear whether President Putin believes that Russia will benefit from a new phase of nuclear competition or, instead, seeks to negotiate new deals from a position of strength. In the meantime, however, Moscow seems intent on sowing confusion among its adversaries and leaving opaque the nature of its nuclear capabilities and doctrine.

This combination of short-sightedness and opportunism combined with the inherent risks of nuclear weaponry and the prospect for accidental or unintended military incidents presents a troubling set of risks. The current occupants of the White House and Kremlin – and their advisors – would do well to heed the key lessons of the Cold War. Both Ronald Reagan and Mikhail Gorbachev came to recognize and then openly state that a nuclear war could not be won and should never be fought. Accordingly, they turned away from nuclear brinkmanship and accepted the idea of mutual and verifiable quantitative and qualitative arms limits. In an earlier era, both Richard Nixon and Leonid Brezhnev, two hard-liners for sure, also recognized the value of détente, including strategic arms control.

In assessing where we should go from here, one thing is clear: Both the United States and Russia will, for the foreseeable future, seek to maintain nuclear arsenals that can survive any combination of a nuclear or hybrid first strike by the other. Thus, having enough survivable weapons to inflict unacceptable damage on the other remains the core of deterrence that should continue to guide strategic thinking in both countries. This means that new developments and programs perceived as undermining such a capability – whether new missile defense technologies, advanced and highly accurate conventional weapons or increasingly the possible impact of cyber capabilities – should be the subject of deep strategic consultations. Even if these talks do not produce new agreements, understanding the thinking and activities of both sides will reduce the risks of miscalculation and escalation.

The fact that neither Moscow nor Washington at this juncture seems interested in pursuing a serious and comprehensive dialogue over what strategic stability looks like in the 21st century represents a remarkable abdication of their global responsibilities.

The reality today is, as was the case decades ago, that neither Russia nor the US can outrace or out compete the other in the nuclear sphere. However, the “Russia issue” in US politics is increasingly toxic and it is unclear whether the nuclear agenda in the bilateral relationship can be salvaged. With accusations of collusion between Trump and Russia and hyper-partisanship now dominating Washington politics, anyone seeking a dialogue with Russia is accused of appeasing Putin. This has to end and real, sustained engagement between US and Russian officials and experts must get under way again.

Richard Burt
is a co-chair of the Nuclear Crisis Group and the former US Chief Negotiator of the Strategic Arms Reduction Treaty.

Jon Wolfsthal
is director of the Nuclear Crisis Group and former senior director for arms control and nonproliferation at the National Security Council. 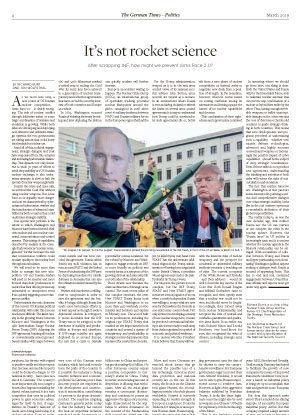