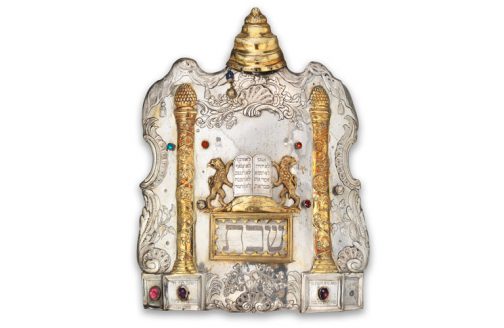 There’s an almost palpable sense of relief in the air at the Jewish Museum Berlin (JMB) these days. After a year plagued by a series of crises, including accusations of anti-Semitism and hostility toward Israel lobbed at the museum and the affiliated Blumenthal Academy, the unanimous appointment of Hetty Berg and the museum’s new permanent exhibition have been met with a positive response from all sides.

Berg, who was born and raised in the Netherlands, possesses all the qualities she needs to assert herself in the difficult position of JMB director. Unlike her predecessor, Peter Schäfer, Berg is Jewish. After Schäfer left in June 2019, the Central Council of Jews in Germany made it a prerequisite that the next director be Jewish. Berg is also a highly experienced manager, an engaging broker, knows how to raise funds and has excellent connections to the various Jewish communities and to Israel.

Berg worked for more than 30 years in Amsterdam, initially at the Jewish Museum, and in her position as chief curator and manager, she played a key role in developing the city’s Jewish cultural quarter. It is precisely this experience with navigating political issues, alongside the support from the Jewish community, that her predecessor lacked.

In summer 2019, Schäfer was forced from his post after a number of clumsy maneuvers, but specifically because of the backlash that erupted after an employee in the museum’s press department posted an uncommented link on Twitter to an article supporting the pro-Palestinian movement known as Boycott, Divestment and Sanctions (BDS). In the past, Schäfer had also drawn the ire of the Central Council, many Jewish communities and even Israel’s Prime Minister Benjamin Netanyahu.

Unlike other Jewish museums in Germany, a crisis associated with the JMB must be negotiated on a larger political stage for the simple fact that the museum is not a municipal institution, but rather a federal foundation. Three quarters of its budget is made up of federal funds, and members of the board of trustees are appointed by Germany’s president.

In 2019, many critical voices had accused the JMB of losing its uniquely Jewish perspective, arguing also that neither the museum nor the academy was the right forum in which to discuss the Middle East conflict with Palestinian representatives. In the eyes of these critics, the open house that Peter Schäfer had sought to create had become a house of arbitrariness where every voice – whether for or against Israel – was given equal consideration.

It’s no wonder, then, that Berg decided to make it clear from the very beginning that she had no interest in engaging in a dialog with BDS supporters. “I reject the BDS movement and have already stated publically that I will not be inviting any BDS activists [to the museum]. BDS calls not only for a boycott of Israel, but also a boycott against the participation of Israeli artists and scientists in the public discourse around the world.”

When Berg arrived at the museum, it had also been weakened by lasting vacancies in a number of top positions there. For example, program director Léontine Meijer-van Mensch had understandably thrown in the towel after having been given hardly any say in the redesign of the permanent exhibition while being limited to organizing only the Children’s Museum. Also in 2019, as the organizer of conferences such as “Living with Islamophobia,” academy head Yasemin Shoomann left after being accused of neglecting the specifically Jewish perspective.

It is now up to Berg to provide answers to some of the big questions facing the museum: Who will be represented in what way at the museum? Whom exactly does the museum seek to address? The museum’s new permanent exhibition has been open to the public since mid-August. Like the previous permanent exhibition, it was designed by Cilly Kugelmann, and invites visitors to engage with the Jewish faith in a lighter way through a wealth of exhibit pieces, including films, touchscreens, table models, comics and games.

At one station, visitors can determine whether they’re the Messiah by answering 15 questions. Everyday objects such as piggy banks, self-made hammocks, pincushions and family photos are exhibited on an equal footing with oil paintings and silverware; this generates an associative approach to telling stories. Music stations and small separate rooms provide the opportunity for visitors to slow down the pace, rest and reflect. The exhibition also explores the themes of homosexuality and women, including a presentation of the first female rabbis in Europe after the war.

The exhibition takes a straightforward but highly aesthetic approach to solving the tricky question of an appropriate representation of Judaism and Jewish life; at several points throughout the museum, visitors can watch films in which people of the Jewish faith tell stories, express their opinions and discuss different subjects. How strictly do Jews have to abide by the Talmud? To what extent do Jews feel pressure to adjust to German society? Are same-sex marriages compatible with Judaism? What is the meaning of the Shabbat? What exactly are the rules for keeping Kosher?

One key theme Berg focused on while she was still in Amsterdam was Jewish life in Europe since 1945. While the Holocaust comprises a large and important chapter in the exhibition, it’s not presented as the historical event toward which German-Jewish history moves. The final space in the permanent exhibition explores the beginning of the Jewish community after World War II, the influx of Russian Jews since the 1990s and the debate over circumcision that took place in Germany in 2012. The exhibition concludes with a video installation called Mesubin, in which a wide array of people of the Jewish faith tell stories: children, men, women, Karneval fans, Israelis living in Germany, Holocaust survivors, people of color, LGBTQ individuals and rabbis with and without beards.

The idea of inviting a wider range of Jews to describe their diverse experiences and tell stories – that is, to speak for themselves, rather than being spoken about – is likely to become the key to the success of the museum under Berg. She has expressed her desire to foster closer contacts to the Jewish community in the future and to create stronger ties to the city of Berlin, for example to James Simon, one of the most influential and generous patrons of the Wilhelminian era, and to notable women like the author and salonnière Henriette Herz.

Berg has stated that she envisions JMB holding an exhibition exploring the subject of “Judaism and Sexuality.” And as soon as the COVID-19-related rules allow, the children’s section known as ANOHA will open. In the coming years, the museum will most likely focus on developing its accessibility, diversity and visual clarity – politics, yes, but not short-term everyday politics; Israel, yes, but not the conflict in the Middle East. 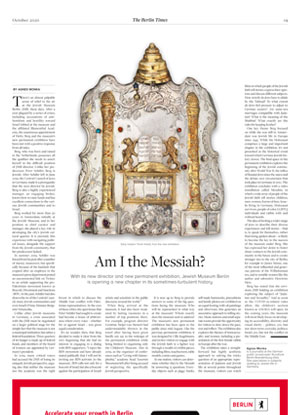