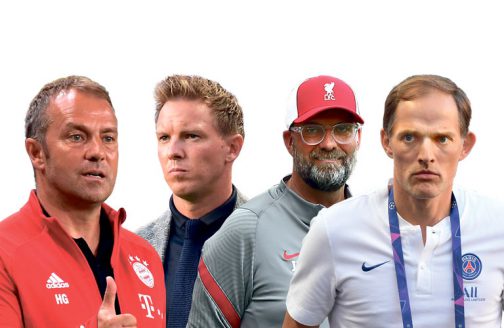 One way to look at the 2019–2020 UEFA Champions League season – which recently came to an end with Bayern Munich winning the final 1:0 against Paris Saint-Germain – is to see it as a battle among German coaches in which Hansi Flick ultimately triumphed over Thomas Tuchel and Julian Nagelsmann. Yet another German coach, Jürgen Klopp, had won the Champions League with his FC Liverpool team the previous season, but this time it was these three German coaches vying for the title, with Nagelsmann and his RB Leipzig eventually bowing out in the semifinals.

Does this mean that German coaches are now the measure of all things? Indeed, they headed up three of the final four teams, which is something the Champions League had never seen before. And we can safely assume that their success stories will launch a new trend in the soccer world. But is it really true that Germans reign supreme in the coaching universe?

What is most certainly true is that we’re seeing a number of key success factors otherwise uncommon in the brutal, hire-and-fire business of professional soccer. Both of the coaches in the Champions League final benefited from these factors, and so, too, did Klopp and Nagelsmann. They were able to combine state-of-the-art sports-science know-how with two rather anachronistic elements: having the time to develop and exercising patience in the pursuit of championship titles.

“Which coach is better?” is the classic dilemma on the business side of sports. But when applied to these successful German coaches, it becomes clear that the question misses the mark. Is it the swashbuckling, ex-professional soccer player-turned-coach who knows the locker room inside out? Or is it the laptop-type coach, who never played in the big arenas and prefers the bookish approach of acquiring his knowledge in the academic realm at a string of sports universities?

However you look at it, present-day soccer lies firmly in the hands of the latter species of coach. Neither Tuchel nor Klopp nor Nagelsmann were master soccer players. And even though Flick was indeed a top professional in his day, he was also one of the few who realigned his approach to the game and underwent intensive academic training after ending his own playing career. This made it possible for Flick to acquire a new and authentic perspective on the game and develop his own ideas. These qualities put him in the same camp as Tuchel and Klopp, while also distinguishing him from old teammates and big-time German stars such as Lothar Matthäus, Stefan Effenberg and Mario Basler, who failed as coaches with their unimaginative old-school approach. There’s no place for former players like these in today’s modern high-tech soccer. However, their skills and reputations are enough for them to work as television experts.

Before qualifying for the final, Champions League-winner Hansi Flick was already a world champion. For almost a decade, he had been able to develop at his own pace at the side of German national coach Joachim Löw. And then, in 2014, with the World Cup victory in Brazil, he was also able to distinguish himself as a quiet and calm mastermind next to the lion at the helm.

In his first five years in the Bundesliga, Thomas Tuchel – like Klopp before him – enjoyed a honeymoon period in the comfortable soccer biotope that is FSV Mainz. After a fairly successful two-year stint with Dortmund, where he ultimately clashed with the club’s leadership, he made the leap to Paris, where he could not immediately meet the high demands of the Qatari sheikhs who own the club, but was still allowed to remain on board. Jürgen Klopp enjoyed a similar route: seven years in Mainz, seven in Dortmund and now five at FC Liverpool.

Nagelsmann, too, is a typical German biotope coach. After nine years in Hoffenheim, his time as coach of RB Leipzig now appears entirely dependent on how long it takes for an English or Spanish club to swoop in and snap him up. Or perhaps it will be a club in Italy, which is exactly where it looked like his mentor, Ralf Rangnick – the primogenitor of the new concept coaches – was headed in early August. The only reason Rangnick didn’t end up at AC Milan was that the team’s graying stars – led by Zlatan Ibrahimović – suddenly started a winning streak. These oldies were exactly the players Rangnick would have taken out of service to make room for the future. But Milan won a few games, which meant that these supposedly over-the-hill players and their unassuming coach, Stefano Pioli, could hold on to their jobs. In other words, a temporary surge in performance destroyed the plans that Milan had been making since the fall of 2019 and had involved some major changes and ambitious goals. This is a common occurrence in professional soccer.

The problem is that too little work is done at the conceptual level. Today’s decision-makers tend to follow their guts and react to events on a day-by-day basis. In such a setting – at clubs where ideas and visions are lacking – there is no chance for sustainable success, especially when those teams are dominated by sympathies, aversions, the influence of aging stars and the pressures of strong fan groups.

Conversely, if a coach is given time and enjoys the trust of his bosses, even through rough patches, that coach can achieve things the stop-and-go trainers can only dream of. Such coaches can shape their teams according to their own ideas and mold players of their own choice into a community. This creates an enormous advantage. But it still in no way guarantees titles at the international level. We can see this clearly in the fate of former wunderkind Pep Guardiola, whose Manchester City super-team embarrassed itself against Olympique Lyon – ranked seventh in France – in the Champions League quarterfinals.

The truth of the matter is that the heroes of the latest Champions League season benefited from the chaotic conditions caused by COVID-19. “Basically, the Germans were a little lucky,” noted Jürgen Klopp. “Amid all the chaos with schedules, theirs was best-suited to the Champions League.” In Klopp’s opinion, the two finalists were not really the best teams in Europe; he argued that any number of clubs in England could beat FC Bayern. Klopp was also right when he said: “I’m not entirely convinced that this is some big statement on the state of soccer in Germany and France.” Of course, Klopp knows that it’s not.

The soccer being played in Germany and France is by no means the best in the world. On the contrary, there is no real competition for these teams in their leagues. Bayern and PSG are utterly dominant; they have no legitimate challengers in the Bundesliga or Ligue 1. Opposing teams never pull out all the stops to try to win against them; their only aim is to avoid a blowout. This state of affairs allowed Bayern and PSG to bank their energy and save those few percentiles of freshness that can make all the difference – at least in a tournament format like this year’s special knockout round, which called for four games in only two weeks.

Yet another factor this season was that all the major European teams – from defending champion Liverpool to Real Madrid, winners in ‘15, ‘16, and ‘17 – were eliminated early on. The semifinals featured only teams from Germany and France: Bayern, PSG, the third-place Bundesliga team RB Leipzig and the oh-so-average team from Lyon. Under normal circumstances, if the latter two teams had played home and away games in intimidating stadiums full of chanting fans, probably neither would have made it as far as it did. But in this year’s compressed blitz of a tournament, it paid off that they were able to save their energy in their entirely one-sided leagues. It was precisely that energy that those well-known clubs from much more balanced and competitive leagues in Spain and England lacked in the end.

Being a German coach is not a sign of quality in and of itself, but it helps if you’re the head coach of a top team in Germany. 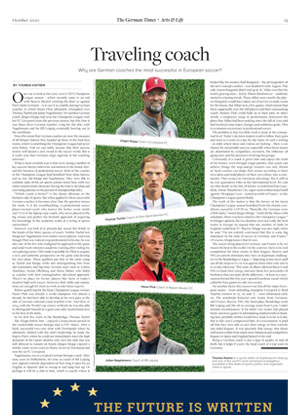