The German Times: Ms. Lakomy, on November 9, 1989, you were a little girl. What do you remember about that night?

Klara Lakomy: I remember that I was put to bed like always after Sandmännchen, the kids’ TV show, but strangely, it was my grandparents who put me to bed, as my parents weren’t home. I was shocked; I was really spoiled and my parents always put me to bed. That’s why I can remember it all so clearly. I was outraged that they had gone out and were neglecting me. I was later told that they had wanted to go to the Wall, to the border crossing at Bernauer Strasse. Family legends of this night only started later: that my parents had put together a basket of food and water in case they were arrested that night and I would have to wait for a long time without them; that they got hold of one of the first of those prized bricks from the Wall that a bulldozer had knocked out of it. A BBC camera team is even said to have filmed this scene, but unfortunately, I’ve never seen the video of it. (laughs)

And what became of this memory?

Lakomy: The interesting thing is that you see how your memories develop. November 9 was also extremely important to my parents because that day resulted in a traumatic loss of their prestige that would not be regained for years. At first glance, my parents didn’t look like typical victims of the fall of the Wall. They kept their jobs and their audience and they were financially better off. They did lose some of their importance and privilege, but they still had their fans in East Germany, who stayed true to them, especially to my father, their idol.

Traumzauberbaum was the GDR musical “Singspiel” recording for children. Every child knew it. Why was it so important?

Lakomy: I would say that Traumzauberbaum [magic dream tree] is almost like a musical drama by Richard Wagner, but for people from the GDR it was much more, especially after the fall of the Wall. I got to see how it became cult, part of East German identity. For certain people, it’s extremely important; it’s their proof that they had something really good in East Germany, something the “Wessis” didn’t have. And the author, my father, wasn’t in the Stasi and my mother probably wasn’t either. You could still like it. It was still good.

Mr. Havemann, you escaped from the GDR when you were 19 and experienced the fall of the Berlin Wall in the West. What was the GDR for you at the time?

Florian Havemann: My time as a constitutional judge in Brandenburg has made me a “legitimist.” The GDR had a certain degree of legitimization or justification, which was simply this: it is better to be ruled by German communists than by Soviet officers. Some people were still hoping that this state would have something to do with socialism. But by 1989, that line of thinking no longer worked as a form of legitimization. When Mikhail Gorbachev said that no more Soviet officers would be coming, it was all over.

So the GDR’s disappearance was just a question of time?

Havemann: I felt it just had to happen. I didn’t know, when and I didn’t know how a revolution might happen, but I asked myself these questions. Things would be destroyed until a new state could emerge. But I also asked myself who would create this state: the military, a leader, a bureaucracy? In the case of the GDR, it became clear what would replace it; the West German republic. That was a recognized point of orientation, a nation state.

What was different about the fall of the Berlin Wall, compared with other revolutions?

Havemann: The revolution in the GDR spared the people one thing, namely having to eliminate each other, be it physically or politically. You could just move to the West. You didn’t have to invent anything; there was something already there. For most people, it was certainly a blessing that you didn’t have to spend a lot of time trying things out. For those who would have liked to try other things out, those in the opposition, it was, of course, terribly annoying. Their “moment” lasted only a historic millisecond, no more.

Between 1989 and 1991, communist governments in all the former Eastern Bloc countries fell. How were the situations in those countries different from that in the GDR?

Havemann: In contrast to the opposition in Poland and Czechoslovakia, the opposition in the GDR was not at all prepared. They had nothing up their sleeve when the Berlin Wall fell. A flood of people leaving in the summer months of 1989 triggered the fall of the Wall. The opposition founded the Neues Forum, which was the only organization independent of the state, but it had no real political substance. It was designed to be a space in which people could talk and exchange views and ideas. That was enough. Just founding an independent organization in a state like the GDR was an achievement. That was already a huge step.

Ms. Lakomy, in Jana Hensel’s book Zonenkinder, the definitive book on the generations living through and after the fall of the Berlin Wall, she describes East German teachers’ profound insecurity in those years. They no longer knew what was right, where their authority came from, what they should do. What was your experience of this time?

Lakomy: I can well imagine that situation. But my first years at school were fairly idyllic. In elementary school, the only uncertainty was whether we would really have to be able to read after first grade, or whether it would be enough for us to just be able to identify syllables, which was all that the Western curriculum required. The upshot was that I really enjoyed the second grade, because we had already learned half the required materials. We went on so many hikes, had wonderful teachers and went on lots of class trips to Brandenburg, because it all cost so little. It was only later that I experienced the ways in which politics could intrude into our lives. One of our teachers was the sister of Heike Drechsler, the famous track-and-field athlete and member of the Volkskammer, GDR’s “parliament.” Everyone loved her, but she had been in the Stasi, so she was fired. We children couldn’t comprehend it. We were all so sad, especially the children who had known her for longer. Everybody in the school was crying because this wonderful woman had to go. Everyone asked themselves whether it really had to be that way. So our parents had to explain to us what the Stasi was, but at the time I didn’t understand it.

Havemann: The whole Stasi business played a huge role in the lives of people in the East. But when I arrived in the West in 1971, nobody was really interested in it, or in the GDR in general. Nobody asked me what it had been like.

Was there a lack of interest in the GDR, apart from a tendency to either denounce it or romanticize it?

Havemann: Complete disinterest. When people asked me why I had left, I used to say that “I was imprisoned in the GDR in 1968 for political reasons,” and that was usually enough. No one wanted to know more. People weren’t interested in hearing about what it was like in prison, or why I had been there. Not a bit of it. No one wanted to hear about what the consequences had been.

Lakomy: It was a state in which you could be imprisoned for things that were mere trifles in Western democracies.

Havemann: There really was no interest in the GDR. I interacted with people from all social classes – workers, intellectuals, artists – because for a long time I worked as an electrician. There was no difference at all between left and right. Shortly before Gunter Gaus was made West Germany’s Permanent Representative in the GDR, a de facto ambassador, in 1974, he invited me and some other GDR refugees to his house. Gaus wanted to know what the GDR was like, how it worked and how political decisions were made in the country. He was the editor-in-chief of Der Spiegel and even he had no idea about the GDR. Most people were just not interested in the GDR. My individual experience then became the collective experience of the entire population of the GDR after the fall of the Berlin Wall.

Lakomy: It really hurt people like my parents, who were artists and thus craved attention and lived for applause. They took it really personally; to them it felt like malicious disinterest. But it was simply their naivete. They were so interested in the West, so they somehow thought that the West would be interested in them. People in the GDR knew all about the West; they all watched West German TV and everyone knew the host of the talk show on channel three in the West.

Havemann: it’s true, they couldn’t have told you who the members of the East German Politburo were, but they knew all the West German government ministers. People in the GDR took collective leave of each other every evening via West German TV.

Is that the main reason for the resurgence in feelings of division, for the more recent feelings of resentment and dissatisfaction?

Lakomy: Lots of East Germans are clinging to the niche they’ve spent all their lives in. They’ve all had to cope with a massive rift in their biographies. Very few people could just go on with life as before. That’s the difference between the normal average citizen from the West and one from the East. Their whole lives were turned upside down. At the time, many of them were intellectually very active; they read a lot, discussed a lot and got involved in politics with friends because they felt like they had to be. Over the past couple of years, though, a certain degree of exhaustion has set in; it’s as if people have used up all their intelligence, all their energy. Now all they can talk about is the fall of the Wall, even though it’s now been gone for longer than it stood. But they’re trapped in the past and overwhelmed by everything they have to deal with now and everything that’s still to come. The fall of the Wall was energizing. It gave them lots of energy, but that’s all been used up now, and it’s left only exhausted people in its wake.

Klara Lakomy was born in East Berlin in 1984. She is the daughter of Reinhard Lakomy and Monika Ehrhardt. In 1980, her father composed the music and her mother wrote the lyrics for the Traumzauberbaum, an iconic East German musical comedy still widely appreciated today. Every child in the GDR could sing along to it. Lakomy, a Berlin-based entrepreneur, is a poet and has also written a novel.

Florian Havemann, born in 1952, escaped the GDR in 1971 and became a writer, painter and composer in the West. He is the son of Robert Havemann (1910–1982), a famous East German dissident who was expelled from the ruling socialist party and spent the last six years of his life under house arrest. Florian Havemann’s new gallery – Berlin, Friedrichstraße 119 – shows a collection of his paintings. 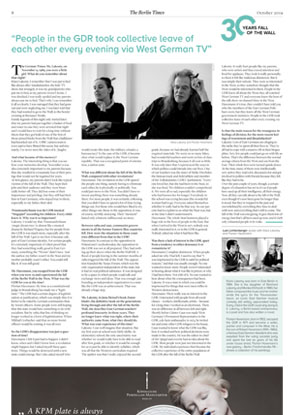