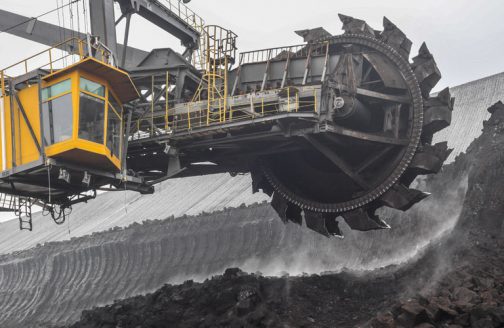 Fossil fuels have driven prosperity, technology and politics but have also created dependencies as well as new possibilities for waging war and destruction

In 1944, one year before the end of World War II, the Russian- Ukrainian biogeochemist Vladimir Ivanovich Vernadsky (1863– 1945) published his final paper. The text, titled “Some Words on the Noosphere,” holds that science and technology have created a new, geohistorically significant layer: the noosphere. Although “knowledge is not a form of energy,” mankind has become the Earth’s “greatest geological power,” and the world war is evidence of this to a drastic degree.

Vernadsky’s diagnosis is being widely discussed in today’s political circles, wherein the climate crisis and biodiversity are but two catchwords. Geologists and cultural theorists speak of the “technosphere” and the “Anthropocene,” a new geological era that follows the Holocene and denotes the period beginning when human activities have first been determined to have had a noticeable and significant impact on the Earth. And it is clear that the industrial use of geohistorical energy in the form of coal, oil and gas has transformed humankind into a geohistorical force.

The ability to think in biogeochemical terms is thus no longer a privilege reserved for scholars such as Vernadsky. Today, CO2 is much more than just a molecule studied by chemists; it is a symbol of the dire need for political decision-makers to think in terms of chemistry. After all, chemical processes in refineries and engines have defined the process of history in the modern age and will continue to resonate in our planet’s biogeochemical processes. Politics, science, industry and societies across the globe are facing the challenge of changing the course of history.

Historically speaking, this situation is new. Neither the taming of fire, nor Europe’s plundering of the Americas, nor the advent of industrialization nor the Manhattan Project were considered to have exceeded planetary boundaries. In those cases, we humans sought to achieve whatever appeared feasible to us. Today, however, it is vital that we rethink our actions, not because our resources are running dry, but because the consequences of the unrestrained burning of coal and oil will ultimately be fatal to us all.

We must act with urgency to combine development goals with climate goals. But we must also understand how we became what we are now. Since their initial use around 1800, fossil fuels have defined the standards of prosperity, technology and politics in ways both positive and negative. The outlawing of slavery and child labor was not only the triumph of ethical achievement and fundamental human rights; it was also a byproduct of engines and power stations obviating the benefits for such exploitative industries. On the other hand, energy derived from fossil fuels has created new and unhealthy dependencies as well as new ways of waging war and wreaking destruction.

We are only now beginning to recognize the explosive power – both literally and figuratively – of fossils fuels, their intrinsic importance for concepts such as growth and individual liberty, and thus also for the time after fossil energies. In recent years, a new discipline called “energy humanities” has emerged – most prominently from petroleum engineering centers such as Houston, Calgary and Edmonton, but also increasingly on the international stage – that seeks to examine the interplay between energy, society and history.

Much like in a system of communication tubes, all societies are interconnected in their way. Fossil-fuel pipelines form one such system. All raw material economies, including Canada, the Gulf States and Russia, are directly or indirectly linked to the producers and consumers associated with industrial and refinery economies in Europe and Asia. And we are going to need knowledge from all strands and facets of this system in order to develop the next, essentially sustainable system.

Fossil-based energy has the effect of technologically uniting various political, economic and social systems. Capitalist and communist societies, democracies and dictatorships as well as state-supported high culture and counterculture – they are all petromodern entities.

It’s not just America’s urban sprawl and its petrochemical sector’s penetration into all areas of life that falls under the petromodern umbrella. Model social democratic countries such as Norway, which invests the earnings it receives from its state-owned oil and gas industry directly back into the welfare of its population, also constitute the petromodern mosaic, as do despotic regimes in the Persian Gulf, where oil and gas profits cripple all social progress, as they function merely to cement the unjust conditions so pervasive in these states.

In historical terms, all parties to World War II can be described as petromodern states. While Nazi Germany managed – through considerable technological effort and innovation – to use coal to extract liquid hydrocarbons for its ships, tanks and aircraft, this process proved insufficient to sustain the needs of its military. With the US and the Soviet Union – the two most prolific oil-exporting countries during the war – as its foes, Baku remained out of reach for the Nazi war machine.

The Soviet T-34 tank, with its diesel engine, was superior to its German counterpart, as was the 100-octane gasoline used by the US air force in comparison to Germany’s liquefied coal. And the United Kingdom, whose navy, even before World War I, had switched to petroleum, which it could source from a number of countries across the globe, was indeed a prime example of a petromodern empire.

What ingredients of the post- World War II economic upsurge should we discard and which postfossil fuel energy path do we now embark upon? The answers to these questions will vary depending on the individual society or state. It would thus be fatal for Germany’s economy – and indeed for its image as an industry-based country – if it were to ignore the planet’s shifting climate parameters and continue to rely on the combustion engine to fuel its robust economy.

How these same issues play out in the US will be of particular interest. It’s patently clear that the wasteful, resource-intensive lifestyle that has come to define modern-day living in the West has no future. But precisely as a reaction to this diagnosis, the idea of embracing a particularly lavish lifestyle is actually gaining traction.

Cars are bigger than ever before; air travel is at an all-time high; and the production of plastic has reached record levels. Stephanie LeMenager, an American literature professor at the University of California Santa Barbara, has described the current state of affairs as a psychological crisis, that is, as an acute case of separation anxiety from a beloved historical condition – “petromelancholia.”

All economies that are currently based on the sourcing, refining and consumption of fossil fuels are now going to have to critically address their practices and cultural habits that depend on petroleum. However, this process of self-examination often touches on national selfimages and their continued propagation.

It can be valuable for a country to explore its history of energy production and consumption. Still, the sense of self-assurance that comes from being a petromodern state can be hard to let go of. The linking of East and West, which currently reflects the linking of the world of mineral and natural resources with that of their chemical and industrial processing, is anchored by oil and gas – and has been since Nobel’s first pipelines and oil tankers in Baku in the 19th century, and since Brezhnev’s gas contracts. Moreover, this bond is fortified by a number of far-from-insignificant other substances.

Fossil industries are chemical industries that require a multitude of chemical elements. Almost every element from Mendeleev’s periodic table has played a role in our tech-based economy. Accordingly, all development areas for these elements have played a role in the technological culture of the world.

It is likely that a number of the milestones achieved in the realm of chemistry in 19th-century Germany would have been impossible without certain resources provided by Russia. When Johann Wolfgang von Goethe’s friend Johann Wolfgang Dobereiner experimented with platinum in Weimar salons during the 1820s, thus advancing the chemistry of catalysis, the only way he was able to source those precious metal from Colombia was through connections to the ruling house of Weimar, and then ultimately from the Urals via Maria Pavlovna, the wife of the crown prince of Russia.

Some decades later, around 1900, platinum became the key metal for the catalytic generation of sulfuric acid, a critical compound throughout the chemical industries. Platinum ultimately become on the most important catalysts in the fertilizer industry, in refineries and in petrochemistry.

Our global present, our fossil fuel-laden chemical modernity is characterized by the exchange of goods and resources between economies belonging to countries with widely varying self-images and narratives. Societies like Germany, which since the 19th century has cultivated its self-image as a country without natural resources – that is, as a country that must create all of its goods itself through chemical means, including beet sugar, artificial indigo dye, rubber, nylon and liquefied coal – can foster aspirations for the future of industrialism. Projects like the generation of artificial hydrocarbons from CO2 and sustainable electricity point in this direction. Yet, sustainable development requires a shared perspective.

Knowledge exchange is of immense value on several levels. Of particular importance is the exchange of a variety of different political, economic and even geostrategic experiences and perspectives, as well as the sharing of the lessons learned in victories and defeats. The gap of knowledge between the countries at the two ends of the pipeline is vast.

Our past treatment of resources should fuel the debate on the future of our resources. History reveals upheaval, and with it the possibility for change. Raw-material economies can develop into champions of high-end technology; yet, setting a faulty course can also inhibit development.

A joint departure into an uncertain future requires working together to build on our varying histories of experience and tradition to forge a new philosophy for advancing our planet. The Russianspeaking tradition holds particular potential for planetary “energy humanities.” Vladimir Ivanovich Vernadsky is already known in the West as a pioneer in Anthropocene theory as well as biogeochemistry, but he is also renowned for his historico-political forays into the geohistorical significance of science and technology. Vernadsky himself published his planetary discourses in several languages, and in so doing stimulated the advancement of science. This legacy must live on. 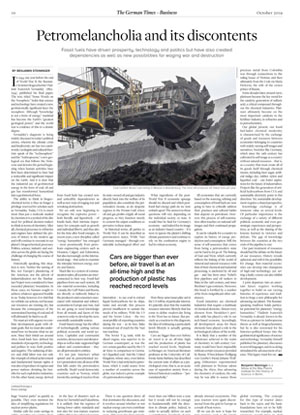