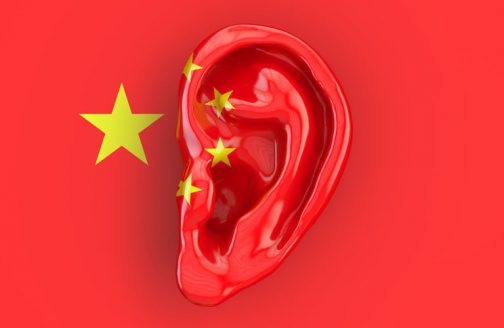 The next generation of wireless systems – 5G –
promises to revolutionize our lives. The new mobile communications technology will blow away all current wireless standards and set in place certain pre-conditions for telemedicine, driverless cars and Smart Cities. These advancements are made possible, in part, by a data transmission rate of more than 10 gigabytes per second – i.e. 20 times faster than what 4G can achieved.

Only four companies in the world can supply the components required to build the 5G network: Huawei and ZTE in China, Ericsson in Sweden and Nokia in Finland. According to industry experts, however, only the market leader Huawei possesses the most modern yet also most affordable technology. The company generated revenue of more than $105 billion in 2018, an almost 20-percent increase over the previous year. Huawei does business in more than 170 countries and regions; approximately half its income comes from outside of China.

The United States government is currently doing all it can to prevent Huawei’s growing influence. It is demanding that its allies cease awarding contracts to the company. Washington’s official justification is that Beijing could force Huawei to spy on or infiltrate foreign wireless networks or sabotage critical infrastructure.

The US has thus far been unable to produce any evidence to support its assertion. This suggests that for Washington, the issue is less about cybersecurity than about thwarting China’s geostrategic rise as it seeks to become the technological and political world power.

The US government is deploying some relatively heavy artillery, especially vis-a-vis the EU. At the Munich Security Conference in February, Vice President Mike Pence stressed: “We cannot ensure the defense of the West if our allies grow dependent on the East.” A few days later, Secretary of State Mike Pompeo traveled to Hungary, Poland and Slovakia, where he threatened each government with the withdrawal of US troops if they fail to thwart Chinese influence in their countries. And in Berlin, a visiting US delegation attempted in December to dissuade the German government from doing any further business with Huawei.

Germany struggled to take a clear position. The country wanted neither to renounce the security guarantees of the US nor jeopardize its increasingly important economic ties to China. In mid-February, Berlin finally announced that no providers per se are excluded from playing a role in establishing new wireless technology in Germany. Huawei technology will only be avoided when building strategically significant networks.

Few were surprised that the decision fell in favor of China. In recent years, the EU has neglected to encourage the development of its own critical digital technologies. Furthermore, the yearly trade volume between China and Germany currently sits at around €200 billion; for years, China has been the largest source of imports for Germany.

In mid-March, irrespective of America’s threats, Italy, the third-largest economy in the eurozone, signed up to China’s gigantic prestige project, the Belt and Road Initiative (BRI). This New Silk Road aims to develop new trade corridors deep into Europe, Africa and Latin America. France, too, has no intention of alienating the new global player from Asia – French wireless providers as well as automobile companies have been working closely with Huawei for some time. The British government, usually a loyal ally of Washington, did criticize Huawei in late March for its ongoing difficulties in closing up security loopholes. However, London is reluctant to ban Huawei from the UK, as it fears additional costs ranging in the hundreds of millions of pounds.

And the German government would ultimately follow the same material economic logic. It can hardly afford to turn down Huawei’s assistance. Germany’s wireless network is one of Europe’s worst, above all in terms of availability and coverage. Moreover, Huawei has been operating in Germany since 2005 and accounts for every second transmission tower in the Federal Republic. No signs of industrial sabotage or spying by Chinese companies has been discovered over the last 15 years.

Nonetheless, the German government would like to minimize this risk. It is currently negotiating an anti-espionage agreement with Beijing, which would include stricter security requirements for technology companies as well as compulsory certification of their devices. Although Huawei has worked for years with Germany’s Federal Office for Information Security and – unlike other providers – allows inspections of the source code underpinning its software, Huawei’s transmission technology will be even more closely examined in the future.

Huawei has already indicated that it will permit more stringent measures, provided that they “apply to everyone and are technology-neutral.” Thus, the US government’s harsh approach could prove to have an unintended boomerang effect, as Washington presumably has no interest in tighter controls. According to the Patriot Act, US competitors like Cisco and Juniper are required to provide US intelligence services with information at their request, not least by way of manipulated hardware and software. The US seems poised to lose the great dispute with Huawei.

However, besides the US there is another loser in this game: the EU. In the struggle for global hegemony, Europe is little more than a ball batted about by the great powers old and new. For its member states, there remains but one small comfort – in the near future they’ll have a downright revolutionarily fast wireless network. 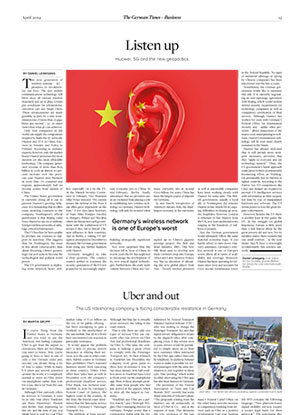