For Donald Trump, Germany’s trade surplus is something of a permanent provocation. The American president appears convinced that Germany isn’t playing fair, but rather providing its own industry with competitive advantages. Or, as Trump himself put it in an interview with the German tabloid newspaper Bild: “When you walk down Fifth Avenue, everybody has a Mercedes-Benz parked in front of his house. How many Chevrolets do you see in Germany? Not many, maybe none.”

What’s the point of this accusation?

First of all, it is correct that something different seems to be happening in Germany than in many other countries. According to calculations by the Munich-based Ifo Institute for Economic Research, Germany has the world’s largest current account surplus, totaling €264 billion this year alone. This amounts to 7.8 percent of annual economic output – according to all established economic criteria, this is too much for a country like Germany.

Thus, Germany relies on other countries to create demand that is not generated domestically – and has, for some time, been criticized for doing so. The International Monetary Fund, for example, has repeatedly called on the German federal government to increase public investment as a means of diminishing the high trade surplus. Moreover, the scope for engaging in a more expansive fiscal policy does exist: In the first half of the year, Germany’s federal government, federal states and municipalities took in €48.1 billion more than they spent. The budget surplus therefore amounted to 2.9 percent of economic output. That’s a very large amount of money.

It would also be in Germany’s interest if this money were to be expended domestically. Due to years of investment reticence, public infrastructure is crumbling and requires urgent renovation. According to calculations by the state-owned development bank KfW, an additional €159 billion must be invested to bring streets, bridges and schools up to date.

For this reason, Donald Trump indeed has a point when he deems Germany’s trade surplus problematic. However, he draws all the wrong conclusions. For example, it makes little sense to threaten individual companies or sectors with punitive tariffs. To be sure, there are a large number of BMWs on American streets, but these vehicles often originate in American production facilities such as the Spartanburg plant in South Carolina. This factory also produces vehicles for export to China. Overall, BMW exports more automobiles from the US than it imports to it. So, if Trump were to increase tariffs on the import of automobiles and auto parts from Europe, it would also increase production costs in the American BMW plants that rely on deliveries from abroad. The victims would be the workers in South Carolina.

In addition, it is true that the EU demands higher tariffs (10 percent) on the import of motor vehicles than does the US (2.5 percent). But this is not the leading reason why so few American cars can be found driving on German streets. Rather, the model types produced by American companies – large cars that consume considerable amounts of fuel – simply don’t appeal to German buyers. Chevrolet would be unlikely to significantly improve its sales figures in Germany even if the EU were to reduce its tariffs.

In any case, the US government also protects its market from external competition. For the light trucks so popular in America, there is a customs duty of 25 percent. President Lyndon B. Johnson introduced this retaliatory measure in 1963 following German and French import limits on American chicken meat. This tariff is still called the “chicken tax” today. It has meant that the light trucks made by European producers are extremely expensive and practically impossible to sell in the United States.

Now, Trump would probably argue that his threats are only a form of negotiation, serving the goal of squeezing concessions from the Europeans. He also has no problem justifying the duties on steel and aluminum on the basis of national-security interests, although this can hardly be reconciled with at least the spirit of international trade law. The problem here is that this type of negotiation – if that is in fact what this is – blows up the global trade order originally established by the Americans. If everyone simply does what they want, then reliability, an imperative for companies, is lost. This is true for American companies too, by the way.

Trump would be more credible if he himself were to make a contribution to reducing US economic imbalances. As we recall, a current account deficit emerges if savings within a country are insufficient to finance investments. This is exactly the case in the US – which is why from a macroeconomic perspective, the Americans should be saving more, especially as the economy is already doing well. Trump is doing the opposite. His tax reform is inflating the state’s budget deficit. According to calculations by his own White House Office of Management and Budget, the state deficit will increase to 5.1 percent of GDP by 2022.

The solution is thus relatively clear: Germany must invest more, while the US must gain control of its budget deficit and save more. However, this is a debate that Donald Trump very clearly does not want to have. 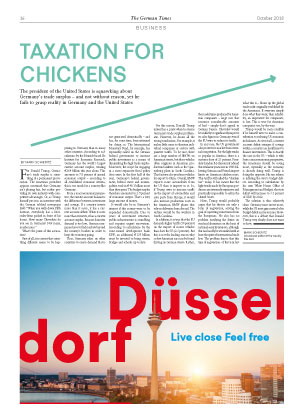