It was one of the last vacant plots in Berlin’s trendy district of Prenzlauer Berg – a prime location nestled between historical buildings and in direct vicinity of shops, restaurants and the heavily frequented U2 subway line. For years the plot remained barren – nothing to see here. Then, one day a sign appeared advertising a housing project initiated by an architect seeking co-builders for a multi-family house. The idea was a combination of street-front apartments and courtyard townhouses – a modern take on Berlin’s traditional housing structure. Bit by bit every unit was sold. Several months into the project, the homeowner group was ready to build on the lot. And in the spring of this year they finally moved into their new homes.

“It was a long process but well worthwhile. I love my new home and I’m starting to feel very comfortable in my new neighborhood,” says Kristina Kutsch who just finished furnishing her penthouse in May. “But over the course of the last five years, since we first started the project, we’ve certainly seen an upward surge in costs. Just finding a craftsman or company to do the flooring or tiling has been a challenge, no matter how much they charge.”

Her experience is not unique. Berlin has become a boomtown for the building industry, as condominiums and rental apartments have been going up in neighborhoods all across the city. At the same time, real estate and rental prices have doubled in the past ten years, edging Berlin closer to the top of the list of Germany’s most expensive cities. Only Munich, Frankfurt, Hamburg and Stuttgart are still ahead. But Berlin has made headlines as the city with the largest increase between 2016 and 2017, with prices going up by a whopping 11.4 percent. Real estate buyers are now expected to shell out close to €3,700 per square meter on average, according to a recent study.

With a growing number of upscale and luxury condominiums currently under construction or in planning for the near future, prices can be expected to continue their upward trend. More than 2,000 apartments are currently on the market for €4,500 or more per square meter, which constitutes roughly half the condominiums for sale, both new and old. The sky is the limit with penthouses and apartments between €5 and €10 million becoming a sought-after commodity for German and foreign investors seeking to participate in the boom and own a piece of the pie – or a pad in Berlin.

For the city, this is a new phenomenon. For years, Berlin was “poor but sexy” – a phrase coined by former mayor Klaus Wowereit. But today we see a dif­ferent situation. “There are four reasons for Berlin’s tremendous price development,” says Till Johannes Brühöfener-McCourt, who heads the research department at Ziegert, a Berlin based banking and real estate consulting firm. “First of all, Berlin’s positive economic development. In the last ten years, we’ve seen an annual GDP increase per working person of 4.6 percent. Secondly, in the same timeframe, we’ve seen the workforce grow by 20.6 percent.” This, he says, has had a stimulating effect on the housing market.

At the same time, however, housing construction has not been able to keep up with demand. According to city authorities, 194,000 new units will be needed by 2030 – an objective that seems out of reach as public housing companies and private developers struggle with bureaucracy and rising costs, let alone properties adequate for urban development.

“And lastly, the average standard land value for residential plots zoned for closed construction has increased sevenfold in the past nine years,” says Brühöfener-McCourt. “Simultaneously, residential developers have seen an increase in costs of over 25 percent.” The result is clear: buying or renting a home has become a lot more expensive in Berlin, a city that has been known as the most affordable and hip European capital.

“There is no denying it: construction has become more expensive,” says Robert Momberg, managing director of the Building Industry Federation East, representing 260 building companies in Berlin, Brandenburg, Saxony and Saxony-Anhalt. “One contributing factor being higher demand resulting in higher prices. A simple case of demand and supply. But there’s more to it.” Momberg lists raw materials as a contributing factor resulting in higher real estate prices. “Although construction is pretty much a local business relying on regional sourcing, we are nevertheless susceptible to global market price changes,” he explains. In other words, when the Chinese administration decides to create the next mega-city and construction companies involved in its development buy up all the steel they can find on the market, building a multi-family house in Berlin becomes more expensive. The same goes for minerals and mineral oil. In fact, between February 2017 and February 2018, German construction companies have seen the cost of concrete rise 2.7 percent while the cost of bitumen used for road surfacing and roof­ing rose 8.6 percent. Steel used in stabilizing concrete structures saw a price increase of almost 20 percent, and even softwood timber has been affected with a price increase of 4.5 percent.

Another factor contributing to higher construction costs is a lack of skilled workers. “The market is practically void, which is due in part to demographic change, but also to image problems construction professions have among younger generations,” says Momberg. “And you have to remember that construction requires a lot of manpower. In fact, up to 28 percent of building costs are com­prised of labor costs.” Increased digitization may help create new job profiles and actually cut some of the labor costs, but the change is only slowly starting to happen, leaving the construction industry with a skill shortage for the time being.

What seems more troubling, however, is the amount of time and energy construction companies and developers spend on dealing with bureaucracy. In Germany, building is strongly regulated and companies must conform to literally thousands of rules and regulations. “We’ve asked our members to calculate their expenses in dealing with bureaucracy and found that 82 percent felt rather burdened, if not overly so. In fact, in 2017, about 17,000 employees in Berlin, Brandenburg, Saxony and Saxony-Anhalt worked exclusively on bureaucratic matters resulting in these com­panies spending a good €500 million just on paperwork. As a result, many projects have been delayed, or even cancelled,” says Momberg. It is now abundantly clear that bureaucracy has also become a decisive factor in real estate price increases.

Add to that a massive increase in land prices and you have an explanation for Berlin’s loss of affordability. For one, many private landowners have been holding off on developing or selling their properties with hopes of cashing in on the boom. Meanwhile, the public sector, a major landowner in Berlin, continues to enforce the policy of selling to the highest bidder instead of seeking the best concept, which could lead to more sustainable and socially balanced urban development.

“When you look at the pure building costs per square meter for a new residential building – whether it be a single-family home or an apartment in a multi-story building – you currently need to calculate about €2,000,” Momberg explains. Add on the cost of the property itself and total prices soar. Thus, a family looking to buy a two-bedroom, 90 square-meter apartment in an upscale neighborhood will more often than not need to spend over €500,000. With salaries increasing at a far slower pace than real estate prices, affording a home of their own has become significantly more difficult for Berliners.

Similarly, finding a rental unit has become a challenge for most, as the market situation shows no sign of relief. Young professionals, university students and lower-income families are being hit especially hard.

More than a hundred applicants per apartment and lines of potential tenants cueing around the corner to attend viewings have become the norm in many neighborhoods. “You have to be creative and willing to make a number of compromises to find an apartment you can actually afford,” says Marie Steffens, a student at Berlin’s Free University, who has spent more than six months looking for an apartment.

So while Berlin’s mayor Michael Müller (SPD) pointed a finger at foreign investors in a recent interview, and considered banning them from purchasing homes in Berlin – much like in New Zealand – developers, builders and Berliners are still waiting for costs and red tape to decrease and the number of available and affordable homes to increase. 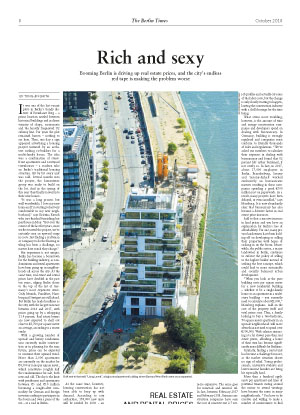