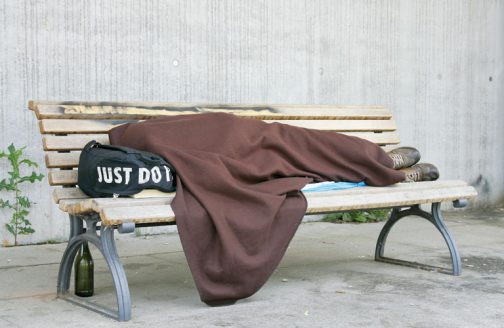 The man hit her. He hit her hard and it hurt like hell. But Sabine Müller* accepted the pain. She clung to the illusion that the man who beat her time and again loved her. It was only once he had thrown her out of the apartment – when she found herself on the street, desperate and destitute – that she knew it couldn’t have been love.

Sabine lived on the streets of Berlin for five years. For short periods of time, she stayed at a women’s emergency shelter. That facility had only one shower for all the residents. Today, however, she has her very own shower. She even has her own apartment. It was a welcome stroke of luck.

Sabine is one of 25 homeless people, including 10 women, who were able to take the step from a rough life on the street to the sanctuary of their own apartment. These people were supported by the Berlin-based projects known as Housing First Frauen and Housing First Berlin, two initiatives that organize apartments for single individuals who’ve been homeless for a long time. For most of these people, the act of finding an apartment they can afford is an exceedingly difficult undertaking. Berlin’s department for integration, labor and social services is heading up the overall project; it spent €143,000 in 2018 and will spend €580,000 in 2019. By the end of 2021, the plan is to get 80 individuals settled in their own apartments.

Housing First is not a Berlin original. The idea comes from the US, where a woman named Tanya Tull developed the first Housing First program in Los Angeles in 1988. Tull was tired of standing idly by and decided to help improve the plight of homeless families with small children. Housing First is now an established aid program in many countries.

But no other city in Europe is as committed to helping the homeless as Berlin. In the winter, the homeless shelter known as Berliner Kältehilfe (aid against the cold) offers 1,200 emergency overnight accommodations. In another facility, people can charge their mobile phones and even bring their dogs, and anyone who shows up is considered a “guest.” Berlin also has a Kältebus, a bus that collects homeless people in danger of freezing on the streets. A total of 200 places are available all year round for emergency shelter, and homeless people without any health insurance are treated in particular clinics free of charge. Since 2018, Berlin also has a 15-bed medical station where homeless people who’ve received emergency treatment at the hospital are able to recover for up to four weeks. In general, homeless people in Berlin are tolerated, even if they don’t have legal residency status in the city.

The woman responsible for the political side of this commitment has a background in social work and trade unions; Elke Breitenbach of the Left Party is Berlin’s Senator for Social Services. For her, Housing First is part of a larger battle plan to effect social change and get as many homeless people permanently off the streets.

It is a grand humanitarian concept and represents an ideal of charity and brotherly love. The only problem with the theory is that it often comes up against a cold, harsh reality. Indeed, Berlin is an example of how altruism can quickly reach its limits.

The official idea was introduced with much fanfare in January 2018. Experts subsequently debated how to combat homelessness at a strategy summit led by Breitenbach. When it was over, Ulrike Kostka, chairman of the social organization Caritas, said: “I am proud that we are a capital of the heart.” And, as the politicians announced, Berlin’s heart was apparently quite big: “Every homeless person in the city, no matter what country they come from, no matter what their status is, will be given a permanent place to stay, and, of course, if possible, an apartment. And every homeless person will be given medical treatment.”

Accommodation for everyone no matter where they come from? And medical care? It wasn’t long before Breitenbach’s phone started ringing off the hook. Media from all over the world had one question for her: Is it true?

Yes, it was true.

Roughly 30,000 homeless people live in emergency accommodations and collective living facilities in Berlin. While around 6,000 live entirely on the street, no one knows the exact number. Many of them come from Poland, southeast Europe and Russia. Nobody can say how many people have made their way to Berlin to benefit from the promised permanent accommodation and medical care, but news of such a policy is sure to get around.

Berlin’s district offices are required by law to provide a couple of weeks of accommodation to any homeless person that requests it. But the law also says that citizens from the EU who haven’t found a job after three months – or who can no longer prove that they’re actively looking for one – are required to return to their homeland. For non-EU citizens, even stricter rules apply. Hamburg, for example, is a city that takes great effort to compel such people to travel home. It is also a city where the number of homeless people from eastern Europe has decreased.

The Berlin approach is considerably softer. The city doesn’t put any pressure on homeless people to actually leave, and whoever doesn’t elect to go voluntarily can simply continue living there.

But does this mean that these people are also to be given accommodation? Is that even possible in a city where the locals themselves can barely find affordable housing? It’s not surprising that some Berliners now see the homeless as presenting an actual problem.

And this problem has manifested itself in other ways as well. In 2017, rats infested a so-called “wild camp” inhabited by homeless people in the district of Friedrichshain-Kreuzberg. The rodents scuttled between dirty mattresses, leftovers and garbage, thereby posing a public health risk and fostering the spread of disease.

“The situation with homelessness has become more extreme,” district officials announced at the time, and proceeded to have the camp vacated. Other camps suffered a similar fate. The city then held a strategy summit to tackle the problem. However, the summit ended up sending out the signal that Berlin could still create accommodating conditions for homeless people.

This has certainly made the situation even worse. Additional “wild camps” had to be vacated due to complaints from nearby residents. Plus, the district health offices have also sounded the alarm. After all, homeless people lie on park benches, under train bridges and in metro stations, while many of them are aggressive and drunk and scare people.

Berlin’s department for social services is now walking back its original claims. They no longer speak of shelters for all homeless people no matter where they come from. The department is now planning to institute a process whereby a person’s claim to permanent accommodation must first be examined. If an individual does not fulfill all the criteria, they will not receive a permanent place to stay.

At Berlin’s central bus station, some of the busses are shuttling homeless people back to their home countries in eastern Europe, with the districts covering the travel costs. In these cases, however, the bus ride is voluntary and the number of passengers is manageable. In the meantime, the number of homeless people on the streets is increasing.

The latest proposed solution to the problem is to create official campsites for the homeless, with sanitary facilities and social workers on hand to provide advice on assistance programs. Ideally these would be set up on unused open spaces that are not near any residential buildings. This is yet another project that came to Berlin from the US – a camp city has already been built for homeless people in Seattle.

The head nurse at City Mission responds with an exhausted smile when she hears that all homeless people in Berlin are to receive medical care. “In practice,” she says, “it simply isn’t feasible.”

Today, Berlin’s City Mission treats roughly 40 patients every week. “Where are thousands of homeless people supposed to be examined?” the nurse asks. Most patients have to be washed first, she notes, and some of them have lice. This means that medical professionals treating such patients need additional staff, not to mention all the other related costs.

No one at the city’s department for social services still talks about providing medical care for all homeless people. The goal at this point is to provide as much care as possible for people who have a right to receive it. But maybe even that is an illusion. 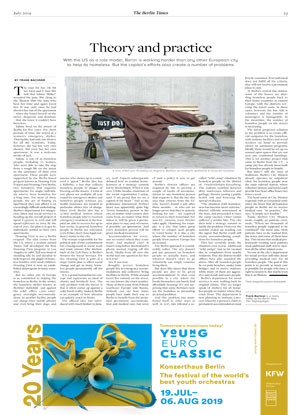