Save the Children was founded 100 years ago 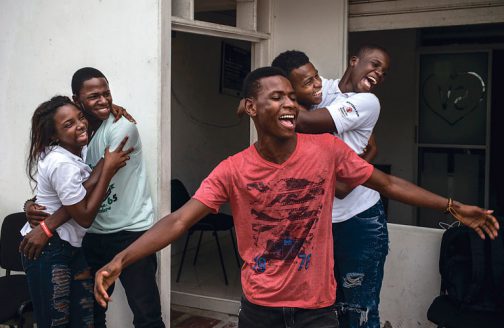 José David Ríos grew up in war-torn southwestern Columbia, where FARC rebels and paramilitary troops fought for years. He was not even nine years old when he was caught in the crossfire of a gunfight, getting hit in his legs and arms. The now 17-year-old found help in a youth program by Save the Children Columbia.
Credit: Save the children

When adults behave like children, the first victims are often children themselves. In these ugly times, it would do us good to recall that we have the power to make the world a better place. We can reject the Hobbesian notion that “man is wolf to man,” and instead seek to be good Samaritans. We can acknowledge the fact that hate only breeds hate, that violence only breeds violence, and focus on the fact that people are capable of altruism rather than egoism, of forgiveness rather than revenge. In short, we could remember that we should all look beyond our own dogmatic, small-minded interests, and maybe even learn to love our enemies and accept that we are all brothers and sisters.

One such insightful person was Eglantyne Jebb. In April 1919, just after the end of World War I, Jebb was shown a photo of a starving Austrian child; the two-year-old girl’s head wobbled atop her dangerously gaunt body; she weighed hardly five kilograms. Jebb saw the United Kingdom’s blockade of supplies to Germany and Austria as the cause of the child’s hunger, and the photo was soon featured on a leaflet she started handing out, which also included the sentence: “Our blockade has caused this – millions of children are starving to death.” She was subsequently fined by a judge, who charged her with distributing illegal political propaganda.

On May 19, 1919, Jebb joined with her sister, Dorothy Buxton, to organize a Fight the Famine Council at the Royal Albert Hall in London. She was now officially collecting money for starving children in Austria and Germany, that is, precisely for those countries the British had just defeated on the battlefield at great human and monetary expense. Jebb’s actions were an affront to many British citizens, and the two women were branded the “traitor sisters.” In her own defense, however, Jebb argued: “Surely it is impossible for us as normal human beings to watch children starve to death without making an effort to save them?” She and her sister insisted on helping as many children as possible, no matter their religion or country of origin.

The fund set up by Eglantyne Jebb soon led to the founding of the aid organization Save the Children. That organization is now celebrating its 100th anniversary with a book titled I am alive. How children survived the wars of a century, a worthwhile read offering insights into a number of sometimes harrowing and simultaneously encouraging life stories.

“Every child should have the opportunity to realize their dreams and develop their talents in a peaceful world,” writes Susanna Krüger, chairwoman of Save the Children Germany. Krüger expresses her grief for the estimated 415 million children today – a shocking and disturbing statistic – who are not able to experience a carefree childhood for the simple fact that they live in war zones or conflict regions.

The book introduces us to 11 individuals who endured hardship in their childhoods, and each essay is accompanied by a commentary from a prominent sponsor of the organization. For example, violinist Anne-Sophie Mutter, Nobel laureate Wole Soyinka and German TV anchorman Ingo Zamperoni provide gentle commentaries on the young heroes – with Soyinka contributing a poem. European Commissioner Margrethe Vestager and former UN General Secretary Ban Ki-moon also contribute essays alongside the 11 life stories from the past 10 decades. The eleventh story focuses on a baby, Rajiya, and is designed to represent the most recent present and the organization’s hope for a more peaceful future to come.

In one case, we are introduced to a Syrian family with nine children, all of whom have suffered varying degrees of trauma and live in a camp in Lebanon with more than one million other individuals who have fled the Assad regime or the Islamists – or both. One girl from that family, when asked what she would want if she could have anything, replies with one word “magic,” arguing that it allows a person to get what they wish for. When asked what she would do with this powerful instrument, she answers: “Turn a cat into a mouse.”

We also read about the war of independence in Biafra, a Nigerian region with an abundance of oil but too little to eat due to a blockade that has caused mass starvation and malnourishment among millions of children.

There is also a report on Afghans who fled to Pakistan after the Russians bombed their villages, suspecting that they were home to Mujahideen, the US-backed Islamic rebels who were fighting against the communist regime in Kabul.

We also read about a young girl who was trained to be a soldier by the Khmer Rouge in Cambodia as a 12-year-old. Later, while in exile in Canada, she would hide under the bed whenever she heard fireworks.

In each story, children are among the victims of conflicts in their home countries, from the Basque uprising against Franco to the Rohingya in Bangladesh.

There’s still a lot of learning to be done if we want to make a better world. In one vignette, a wise and elderly German gentleman, who was helped at the age of seven by Save the Children and who is now more than 100 years old, stands on the seventh-floor balcony of his seniors residence and looks across the street at a village of container homes. When the news broke that refugees were going to be moving in there, many of his neighbors were skeptical, but his response was more generous: “Let them come first. Let’s wait and see how it goes. After all, they’re people in need.” After reflecting for a moment, he adds: “I think people in Germany could live more quietly and contentedly.”

I am alive. How children survived the wars of a century will be published in English and German on Nov. 25. 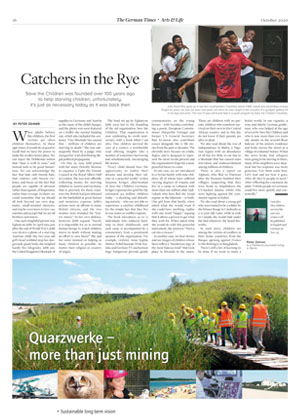