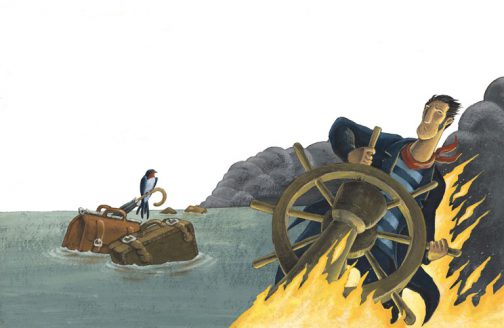 A paddle-wheel steamer in flames on Lake Erie – hundreds of passengers in mortal danger – the safety of the shore still far off: Ask a German man, woman or child if these fragmentary images ring a bell, and their likely answer will be the name John Maynard. “Who is John Maynard? John Maynard, he was our helmsman who …”

Thus begins one of the most famous ballads in German literature. Upon hearing these first lines, Germans can immediately conjure the drama before their eyes – a ship in flames, smoke everywhere and a brave man remaining at the helm to guide the steamer to the shore – “Still ten minutes to Buffalo.”

This heroic story in verse remains one of the most memorable works of German poetry, and is still read and discussed in schools. Perhaps this year more than usual, as it marks the bicentennial of the birth of its creator, Theodor Fontane (1819-1898), in the Brandenburg town of Neuruppin, just north of Berlin. Commemorations are planned throughout Germany, but particularly in Berlin and Brandenburg, providing an occasion to recall the life and work of the writer considered the foremost figure of 19th-century German realism.

The maritime emergency so vividly portrayed by Fontane was based on the steamer “Erie” and its ill-fated voyage of Aug. 8, 1841, when it embarked from Buffalo, destination Detroit. According to contemporary accounts, fire broke out a few hours from shore. The most likely cause was a quantity of paints and turpentine that must have ignited on board after being stowed too close to the engine room. Newspapers reported that, because of the speed with which the flames consumed the ship, barely 30 of the 200 to 300 people on board could be rescued. Most accounts paid special tribute to the helmsman, who remained at his post to attempt to steer the stricken vessel ashore before its rudder finally jammed.

Forty-five years after the event, Theodor Fontane elevated the helmsman into the legend of John Maynard, who has lived on in schoolchildren’s imaginations ever since. Fontane did not adhere strictly to the facts. His steamer sailed in the opposite direction – from Detroit to Buffalo – and all his passengers survived the inferno. He turns Maynard into a heroic figure, one who sacrifices his own life to save countless others. Very much in the spirit of his time, Fontane condensed an actual event into a gripping drama of courage, duty and devotion, extolling the protagonist as the standard-bearer of these outstanding human virtues.

For the many Germans who read Fontane’s ballad in school, the Great Lakes of North America, the backdrop of the tale of John Maynard, are transposed like maps on their minds. So it’s all the more disappointing for Maynard’s many fans who, after visiting Niagara Falls, travel on to Buffalo, only to be met with shaking heads and shrugged shoulders when they ask the locals about the stalwart sailor. “Who is John Maynard?” they may hear in puzzled response. Yet some, burrowing through decades of memories, can still launch into the ballad’s opening lines: “John Maynard, he was our helmsman who…”

Such discussions have also likely cropped up between the respective communities of the sister-cities Buffalo and Dortmund, situated in the western German state of North Rhine-Westphalia – especially as the poem’s final lines refer to a gravestone in which “cut in the marble in letters of gold; The city’s debt of thanks is told.” Over the decades, many Germans have scoured Buffalo in vain search of the monument. That is, until authorities in the two cities agreed to mark the 20th anniversary of their partnership with a special gesture. In 1997, at the Erie Basin Marina, right at the water’s edge, a bronze plaque was unveiled with an English translation of the poem and explanations of its historical context.

In all of Fontane’s works, the John Maynard ballad is the sole prominent reference to the United States – then still a faraway land. In German literature, Fontane primarily remains associated with Prussian history and his love of Brandenburg, which he preserved for posterity in Wanderungen durch die Mark Brandenburg (Walks through Brandenburg), a literary travelogue of his local excursions. Hardly any town in today’s Brandenburg, no matter how insignificant, has an identity that omits at least a passing mention to Fontane’s travels. This anniversary year is a rare opportunity for even the tiniest hamlets to draw outside attention by citing its reference in Fontane’s Wanderungen.

Not unlike Buffalo, one Brandenburg village has become identified with a Fontane ballad that, if anything, is even more famous in German than “John Maynard.” In 1889’s “The Squire von Ribbeck at Ribbeck in Havelland,” Fontane tells the story of a generous lord of a manor who orders that he be buried holding a pear, which would then grow into a magnificent pear tree. Throughout his life, the good squire had enjoyed handing out ripe pears to the children in his village, and thus the tradition could continue after his passing. Over the years, as in Buffalo, readers flocked to the village of Ribbeck in search of the poem’s traces, and the legendary pear tree in particular. But only a stump was left of the 19th-century original. In the year 2000, a new pear tree was then planted in front of the village church. Fontane lovers can now find – in Ribbeck and in Buffalo – a tangible link to the literary locations that once sent their imaginations soaring.

“Who is John Maynard?”
“John Maynard, he was our helmsman who
Held out ‘till he brought us safely through,
Saved us and wears a hero’s crown above,
For us he died, and his reward our love,
John Maynard.”

Across Lake Erie the “Swallow” wings,
Foam like snow the ship’s bow rings.
Detroit to Buffalo she makes her way
All hearts aboard feel free and gay
And passengers with kith and kin
Can see the shore in the twilight dim
And chattering to John Maynard say
“Helmsman, how much further away?”
He looks ahead, then around and explains,

Every heart is cheerful and every heart feels free
When from below a cry suddenly:
“Fire!” was the awful shout
As smoke from cabin and hatch poured out,
First smoke, then flames, a blazing glow,

And still twenty minutes to Buffalo.

And passengers crowd around the bow,
The colorful mass pressed together now;
At the bowsprit there’s still air and light
But at the helm the smoke’s grip is tight;
A moan is heard, “Where are we? Do you know?”

And still fifteen minutes to Buffalo.

The wind increases but the smoke cloud stays.
Towards the helm the captain turns his gaze
He can discern his helmsman no more
But through the speaking tube implores:
“Still there, John Maynard?” “Yes, sir. I am.”
“Head to the beach! Into the surf!”
“Yes, sir. I’ll ram.”
And the people cheer on: “Please don’t let go!”

And still ten minutes to Buffalo.

“Still there, John Maynard?” Then this reply
With a dying man’s voice. “Yes, sir. I’ll try.”
And into the surf, amid rocks and stone,
He guides the “Swallow” steering alone.
Should rescue come it will only come so,
Rescue: the beach of Buffalo.

The vessel’s broken, it smolders like coal
All have been saved, all save one soul.

All the city bells peal, their tones upswell
To heaven from each church and chapel,
A ringing and tolling, all else is silent.
Just one goal on which all are bent:
Ten thousand or more make up the train,
And none in the crowd the tears can restrain.

The coffin’s lowered, upon flowers laid.
With flowers they then close the grave
And cut in the marble in letters of gold
The city’s debt of thanks is told:

“Here rests John Maynard. In smoke and flame
He held onto the rudder with might and main.
Saved us and wears a hero’s crown above.
For us he died, and his reward our love.
John Maynard.”