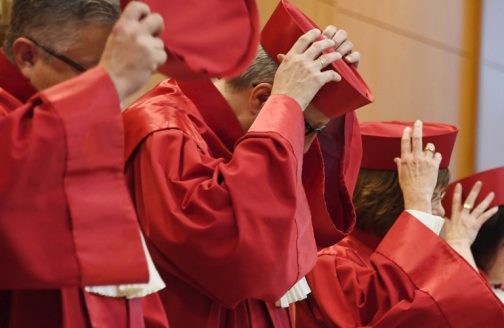 Ten years ago, when Germany’s Basic Law turned 60, the birthday party in Berlin attracted hundreds of thousands of citizens. They strolled along Strasse des 17. Juni where official institutions had set up their exhibition stands. They crowded in front of the Brandenburg Gate to listen to Beethoven’s Ninth Symphony, with the final melody that has become the hymn of the European Union, and to pop music afterwards. And from everywhere in the city, they watched the fireworks at night. Some weeks later, an Italian colleague and former ambassador to Germany, who had seen this on TV in Rome, told me he envied the Germans for being able to celebrate their constitution with such a public festivity.

Germans do like their constitution. In a sense, they have embraced what political scientist Dolf Sternberger had recommended in the late 1970s as an alternative to other types of affirmative national feelings that recent history had made unavailable: constitutional patriotism.

When the Basic Law came into effect on May 24, 1949, no one expected it to become so popular. It was originally intended as just a provisional framework to serve until Germany would, hopefully, be reunited and then adopt a constitution deserving the name. That is why it was called the “Basic Law,” in line with the fundamental laws of the long-defunct Holy Roman Empire.

The Basic Law was designed as a counterpoint to the barbarism of the National Socialist dictatorship, and as a bulwark against new totalitarianism, not least the communist variety. This is most clearly expressed in the first two sentences of its first article: “Human dignity is inviolable. To respect and protect it shall be the duty of all state authority.” Unlike the Weimar Constitution, the Basic Law places fundamental rights in front and only then proceeds to organize the state that is to respect them. Just like the guarantee of human dignity, this was meant to express a view on the relationship between the individual and the state. The draft of the Basic Law concluded at the Constitutional Convention at Herrenchiemsee had put it this way in its suggested opening sentence: “The state exists for the sake of man, not man for the sake of the state.”

With the fundamental rights of the Basic Law, the new order was defined as a liberal one. There was, however, no clear decision in favor of a liberal economic order. The Basic Law protects private property, but stipulates that the use of property should also serve the common good. Due compensation provided, it allows expropriation not only in individual cases of special need, e.g. for infrastructural purposes, but also for the purpose of socializing land, natural resources and means of production. When before reunification, citizens were asked to say where they thought this article originated, most people guessed it was from the constitution of the communist German Democratic Republic.

In other respects, too, the Basic Law has a strong social component. In keeping with German traditions, it provides that the Federal Republic of Germany is to be a social state. Along with the guarantee of human dignity, federalism, democracy and the rule of law, this is one of the core elements of the constitution, immunized against abrogation by an eternity clause.

The democratic regime institutionalized by the Basic Law is of the parliamentary type. The president of the federation has almost exclusively symbolic representative functions, and none of the powers of the Reichspräsident that had paved the way for the Nazi take-over in the Weimar Republic. Various other precautions were taken against a return of “Weimar” instability. A prominent one is the stipulation that a parliamentary vote of no confidence be constructive, i.e. that Parliament can overthrow the government only by electing a new chancellor, not just by voting out the incumbent.

Unlike the United States Supreme Court, the German Federal Constitutional Court is not divided along political lines reflecting the party that nominated each judge. In most of the important cases decided by panels of eight, about 92 percent in the long-term average, decisions come without separate opinions. When including the large number of minor cases decided in chambers of three, where only unanimous decisions are possible, the unanimity rate far exceeds 99 percent. With its collegial, deliberative, compromise-oriented mode of operation, the court has contributed to integration rather than polarization. According to German polls, only two authorities enjoy a level of trust equal to that in the Federal Constitutional Court: the Federal President and the police. As far as the police are concerned, the court has certainly contributed to their popularity. With a broad interpretation of fundamental rights, high demands on the proportionality of all authoritative interventions and a high level of relevant oversight activity, it has shaped the German republic into a state that, as a rule, presents a rather friendly face, even where it exercises powers of command and coercion.

Despite many beneficial effects, the prominent role of the Federal Constitutional Court in Germany carries a risk. A network of constitutional restrictions woven during almost 70 years of only moderately restrained constitutional interpretation may well result in less flexibility than a democracy needs to prosper. The Federal Constitutional Court, although not formally bound by precedent, has overruled its earlier case law much less often than the US Supreme Court has. However, that is rather due to institutional frameworks keeping it steadily on middle ground than to a lack of pragmatism and flexibility. Fears of fossilization would therefore seem premature. Besides, there is always the possibility – thus far rarely and quite unspectacularly used – for parliament to “overrule” judicial doctrine by amending the constitution.

The Basic Law can be amended more easily than the US constitution – by a two-thirds majority in both chambers of parliament. It has been changed more than 60 times, and not always to its advantage. The Federal Republic’s federalism, weak from the outset, has on the whole been weakened even further, and many articles have lost concision.

The most important changes have not come about with constitutional amendments, at least not directly, but over the course of European integration. This has in part been accompanied by constitutional amendments. Yet the most pervasive effects of European integration are not apparent from the text of the Basic Law. Nowhere in the Basic Law is it made explicit that, subject only to some cautious reservations enounced by the Federal Constitutional Court, EU law trumps national constitutional law. In the disputes over the huge influx of refugees in 2015–16, the supersession of German constitutional law by EU asylum legislation has led to some confusion and to unjustified allegations of illegal government action. Many critics of government action, even some well-known constitutional lawyers, had failed to notice that the asylum law article of the Basic Law is no longer applicable as it stands, due to more demanding yet little known EU rules.

The 70th anniversary of our constitution may not see celebrations quite as merry as those a decade ago. Too many things in the world at large, in Europe and in Germany itself, seem out of order. Due to a competitive economy with many specialized producers of industrial equipment and other goods for which there is a high demand in rising economies all over the world, Germany is in many respects one of the winners in the process of globalization. But in Germany, as in most of the West, the distribution of gains and losses is out of balance regionally as well as socially. Like all EU member states that, due to satisfactory economic performance and tolerably efficient governance, have been able to develop and maintain an attractive level of inclusive social security, Germany also faces especially high migration pressure. Containment depends to a large extent on extra-European rulers, sometimes sinister potentates, whose cooperation in fencing off migration routes is bought expensively. Widely diverging interests of European member states in economic, financial and migration matters, as well as the Brexit schemozzle, supervene.

Obviously, even a best-designed and, for the time being, best-respected national constitution cannot guarantee that everything will somehow turn out well and leave German democracy intact. But is a crisis in sight? In the 2017 federal election, 12.6 percent of the voters opted for Alternative for Germany (AfD), a right-wing anti-euro and anti-migration party that fishes in muddy waters and whose functionaries often use abusive, sometimes racist language. To prevent it from gaining more ground and, possibly, to win back those who have voted AfD not in full sympathy but just as a warning, most of the competing parties have meanwhile adjusted their course to a greater or lesser degree. They have navigated somewhat to the right, if only by no longer disparaging candid discussion of, say, problems concerning the integration of migrants. Unlike great swaths of the liberal elite, with whom I share their distaste for the AfD, I do not see the current shift in the zeitgeist as indicating or foreshadowing a crisis or collapse of the liberal and democratic order of the Basic Law. This is not the incipient demise of liberal democracy. It is how liberal democracy works.

THE SCARLET ROBE
Who comes up with an outfit like that? In fact, it was a costume designer at the Baden State Theater who designed the official attire worn by the justices on Germany’s Federal Constitutional Court. The robes are based on the traditional garb worn by judges in 15th-century Florence. The German judges began wearing their characteristic scarlet robes and white jabots for oral proceedings and verdict announcement starting in 1963. Previously made of a heavy duchesse fabric, the robes switched to a lighter satin blend in 1997, with every new judge inheriting a robe from their predecessor. But not everyone is a fan of the eye-catching outfits. When Fabian von Schlabrendorff was a justice on the Federal Constitutional Court (1967–1975), he was heard poking fun at his attire, noting that it had “a theatrical flair that promptly inspires in those who behold it a desire to ridicule.” But the judge is wrong on this count; no one is making fun of his colleagues on the bench. Indeed, the judges in Karlsruhe enjoy the highest possible level of respect in Germany. And those stunning robes – whether in spite of or precisely because of their eccentric nature – succeeded in calling attention to the importance of the court as an independent constitutional body. As our author writes: “The most peculiar and successful creation of Germany’s Basic Law […] has been the Federal Constitutional Court.”

Gertrude Lübbe-Wolff
served on the Federal Constitutional Court from 2002 to 2014. She taught law at the University of Bielefeld 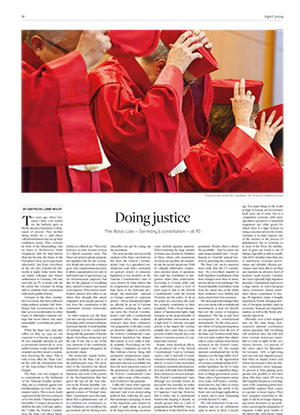