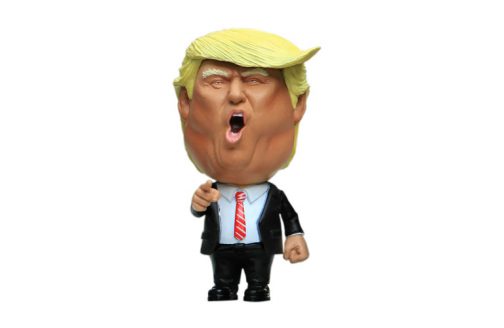 In early August, President Donald Trump was able to celebrate a small yet tangible success in his beloved trade war. The European Union and the United States had just signed an agreement on the import of American beef to Europe – one in which the EU committed to accepting up to 35,000 tons of hormone-free beef from American suppliers over the next seven years. As the total of EU imports is not allowed to exceed 45,000 tons per year, the agreement is basically a deal that will be carried out to the detriment of other supplier countries, such as Argentina and Uruguay. In the future, they will have a quota of only 10,000 tons.

Welcome to the brave new world of Trumpism. As seen from Brussels and Berlin, the agreement is the price they needed to pay for a kind of cease-fire in Trump’s trade war against Europe. The president postponed the decision on whether he wants to levy new tariffs on European cars – that is, on German cars – until Nov. 13. Prior to that, the EU had also already pledged to promote the sale of American soybeans and liquefied natural gas (LNG).

Agreements such as these seem to confirm Trump’s belief that trade wars are “good and easy to win,” and thus that protectionism pays off. Either way, he appeared conciliatory at the latest G7 summit, where he said he did not need any tariffs on cars and that he was hoping for a good trade agreement.

In other words, Trump has actually achieved something with his policy of threats. The only question is how the citizens of the US actually benefit from this approach – at least beyond narrowly defined interest groups, such as cattle breeders. Indeed, it is ultimately American consumers who are going to bear the cost of tariffs by having to pay more for imported consumer goods. When trading partners defend themselves and retaliate against Trump, US industry also ends up suffering.

In this context, it can be instructive to look at the indirect consequences of these actions, that is, at the collateral damage associated with customs duties. The Kiel Institute for the World Economy recently presented a study in which experts pointed to the fact that today’s industrial products are manufactured in long supply chains, which means that those primary products entering the chain at almost any point will now be subject to Chinese or US customs duties. This, in turn, has an effect especially on countries not involved.

Today, Canada has $648 million in customs costs as a result of the Chinese-US trade war; Mexico has $522 million and the EU more than $1 billion. The chemical, electrical and automotive industries are the sectors most affected.

However, the victims also include – and this might surprise Trump’s trade policy experts – the US itself, which now has to pay $415 million more for primary products. The damage is almost the same level as in China.

And this is just the short-term view of things. The long-term perspective makes everything even clearer. Economists at Germany’s Commerzbank are now referring to a “new cold war” having broken out between the US and China. As a consequence, US imports from the People’s Republic have plummeted by 10 percent over the past three months, and China’s imports from the US have fallen by as much as 20 percent.

In an ironic quirk of fate, America’s current accounts deficit – which, in Trump’s view, illustrates the US disadvantage in world trade – has continued to rise during his term in office. In fact, the US deficit in trade with China rose to $420 billion last year, from $375 billion in 2017. It has grown not despite, but because of his policies. Indeed, the uncertainty that Trump engenders tends to weaken the global economy, which means that the EU and China – as trading partners – start to suffer; today, their currencies, the euro and the renminbi, are coming increasingly under pressure, the dollar is getting stronger and American exports are becoming more expensive.

The economists at Commerzbank argue that Trump’s policy will also lead to a strengthening of the trend toward deregulation, which began with the 2008 financial crisis. Entrepreneurs are now rating the risks associated with doing business in foreign countries higher. As a result, the value chains become shorter and overall production less efficient. This, too, will ultimately harm the US economy.

However, the worst consequences of Trump’s economic nationalism are political and strategic in nature. In a recent article in Foreign Affairs, US economists Chad P. Bown and Douglas A. Irwin accuse the president not only of being openly protectionist, but also of having launched an “attack on the global trading system.” By overriding international trade rules, they argue, the government in Washington has damaged America’s image in the world and encouraged others to follow suit.

In other words, the multilateral trade system that existed for 75 years under US leadership is now up for grabs. At this point, we can only guess what this means for America’s position in the world.

Take, for example, the World Trade Organization. Founded in 1994 in Marrakesh with strong involvement from the US government under Bill Clinton, the WTO has played an important role ever since as a referee in trade disputes among its 164 member states. If one country believes that another has violated its rights through some form of tariff or trade restriction, it can file a lawsuit at the WTO, where arbitration tribunals (“panels”) – made up of equal numbers of member representatives – decide on each case. If the verdict comes down in favor of the plaintiff country, then that country is permitted to raise tariffs to protect its economy, as long as the defendant government refuses to change its policy. So far, the US – as the world’s largest trading nation – has effectively been the WTO’s guarantor, while itself following the rules of the multilateral organization.

This system would seem to be pretty much over. The US is actively sabotaging the WTO by no longer appointing judges to the arbitration panels. The tribunals must be filled according to a fixed country key, which means that other countries are not permitted to intervene. This is why everything is likely to come to an end on Dec. 10, which is the last day in the tenure of the two judges Ujal Singh Bhatia (India) and Thomas R. Graham (US).

If the US does not submit the names of the new judges to which they are entitled to as part of these WTO tribunals – and no one is counting on this happening – then the tribunals will no longer be able to function. Trump even tweeted that the US might quit the WTO altogether.

The US president has been violating the spirit of the organization for a while now. In 2018 he justified the tariffs he imposed on steel and aluminum by referring to a supposed threat to national security. While it is true that WTO rules allow trade to be restricted when the security of a country is threatened, the reasoning in the case of steel and aluminum was declared by many, including the Federation of German Industries (BDI), to be “absurd.” In fact, roughly 70 percent of the steel and aluminum used in the US is actually produced in the US anyway. In other words, the duties were a purely arbitrary act.

The departure of the US from the WTO’s disciplinary reach will no doubt trigger counter-reactions from trading partners, and these moves are going to be hard to calculate. Indeed, arbitrariness often produces its own unique dynamic. The Süddeutsche Zeitung recently reported on comprehensive plans coming out of Brussels with regard to a trade policy upgrade at the European Commission. According to this plan, the EU would be able to immediately impose punitive tariffs in the future, that is, without WTO approval. And they would be able to launch these punitive tariffs against states that obstruct the WTO arbitration courts.

It should be noted that the only such state at the moment is the US. In other words, Europe’s most important partner to date has now become an opponent. Incoming European Commission President Ursula von der Leyen will have to decide whether these EU plans actually become a reality.

So far, Trump and his team have tended to underestimate the counter-reactions coming from foreign countries. In an interview with Fox News last year, one of Trump’s radical protectionist economic advisers, Peter Navarro, said the following: “I do not believe there’s any country in the world that wants to retaliate for the simple reason that we’re the biggest and most lucrative market in the world.”

This hubris has consequences. Of course, the victims of US protectionism – China, Mexico, Canada and the EU – have long since started fighting back, and by 2018 they themselves began charging tariffs on US agricultural products. As Bown and Irwin write in their article, those US tariffs designed to protect the jobs of 140,000 steel workers are now threatening the economic wellbeing of 3.2 million farmers.

Finally, it is quite possible that Trump’s trade policy will end in a global recession. The only question is whether this happens before or after the 2020 elections in the US. 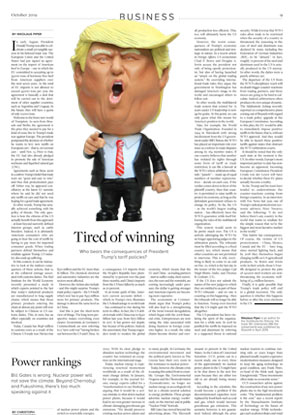