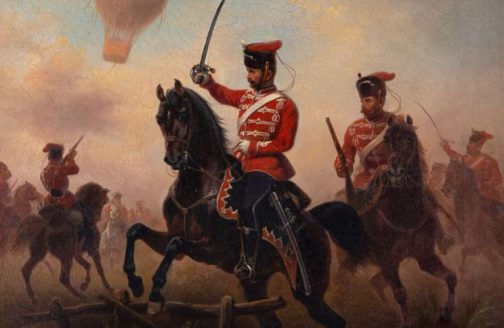 Two years after the end of the Franco-Prussian War, the painter Anton von Werner completed his epic battlefield portrait of Helmuth von Moltke, Chief of the German General Staff. High on his steed atop a hill, the field marshal is depicted looking across the valley where, in the distance, he can behold Paris, the seat of the French government. As Moltke surveys the terrain, his soldiers are erecting a telegraph line for swift communication with his comrades. Moltke is thus pictured as a field marshal whose strategic prowess rests not only on a mastery of the classical art of war, but also on the deployment of the newest technology.

This historical painting distils one of the essential characteristics of this war: a remarkable juxtaposition of traditional and industrialized warfare. Drum meets drumfire – just as before, a drummer would set the pace of the infantry’s marching advance, but with increasing frequency attacks would stall in the face of the destructive power of modern cannon fire like that from the feared mitrailleuse. Fierce cavalry charges – often a decisive battle maneuver in former wars – failed under the heavy losses accrued from enemy barrages. The pitched battles and colorful uniforms of the various regiments recalled the cabinet wars of a century hence. But the operations of the generals and their armies were becoming more dynamic and more aggressive while suffering ever-heavier losses. The “engagement” of forces in 1870–71 was already heralding the mechanized killing later to define World War I.

Exactly 150 years after the outbreak of the Franco-Prussian War, the Bundeswehr Museum of Military History in Dresden is venturing an exceedingly complex presentation of a conflict that ended with the proclamation of the German Emperor in the Versailles Hall of Mirrors, in the official consummation of the founding of the German state.

The curators see the war as not isolated in this context, but rather as the conclusion of a historical development that had already been set in motion with the aborted process of nation building following the German revolutions of 1848–49. With the Second Schleswig War of 1864 and the Austro-Prussian War of 1866, Prussian Minister of Foreign Affairs Otto von Bismarck had paved the way to a German unification “from above” under Prussia’s leadership. It was not inevitable that these preceding wars led to the war against France, but when this option arose, Bismarck knew how to exploit it.

In its understanding of the context of the Franco-Prussian War, the Dresden exhibit is adopting a perspective widely shared among historians.

But what makes the exhibit so engaging are the many nuances that provide concise illustration of the war’s daily routines and its aftermath. In terms of both weapons’ technology and logistics, the industrialization of warfare was now secure in its inexorable march forward. The precisely targeted transport of military units via railroad and the swift communication made possible by telegraph were decisive factors. Supplies for the front were manufactured with efficiency and high levels of standardization in armament factories, and this applied not only to guns and artillery, but also to the apparel and equipment of soldiers.

Early on, the war was felt acutely on the home front as well. Despite the initially decisive victory at the Battle of Sedan on Sept. 2, 1870, fighting dragged on for months as part of the subsequent siege of Paris. Correspondents from various daily newspapers stationed at theaters of war wired their reports to their editorial offices and kept their readers up-to-date on the progress of the fighting. And the military leadership eagerly sent official dispatches with patriotic news of victories to the German states, which were then posted in public squares. In this respect, the war cast its shadow into the modern age in terms of media coverage as well; the people were kept informed almost in real time and propagandists honed their skills in the art of spiritual warfare, especially in defaming the adversary.

The increased publicity also led to the nascent Red Cross movement experiencing a significant boost in interest and participation. The voluntary care of the sick and wounded from all warring parties became a widespread reality for the first time during the Franco-Prussian War. Doctors and caregivers were protected under the banner of neutrality; and on the home front, women from the nobility and bourgeoisie contributed to the training of nurses and the amassing of care packages for soldiers containing food and clean clothes as well as bandages and medications. In looking after wounded soldiers and providing the best care possible, the war was now no longer waged solely on the battlefield, but also in sickbays and nursing facilities. Death and the plight of the wounded became lodged in the consciousness of broad strata of the population, and to an increasing degree this promoted a sense of national sentiment and belonging.

Time and again, the Franco-Prussian War highlights the uneasy coexistence of an old and new era. Of particular fascination are the works of contemporary battlefield painters depicting the tethered balloons intended, during the months-long siege of the Paris, to help the city’s defenders establish communication with unoccupied parts of the country. On the ground are horse-mounted Hussars in pursuit of the new flying objects, which are attempting to launch by way of carabiners. It’s hard to imagine a more glaring collision of the traditional with the modern. 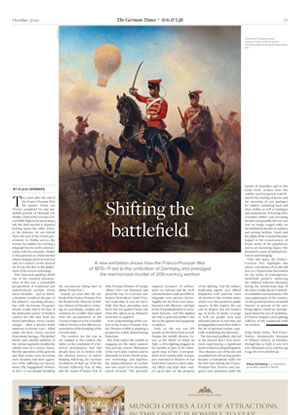