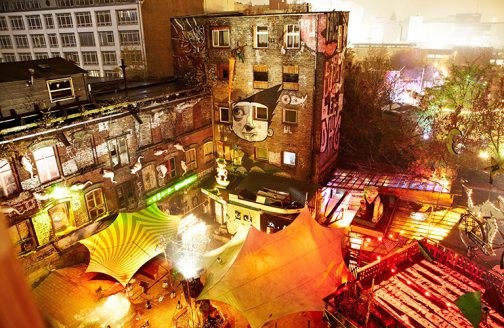 Dancing with tears in their eyes: The legendary club Kater Holzig had to close its doors in 2014.
IMAGO IMAGES/CARSTEN DAMMANN

The Berlin Wall came tumbling down in 1989, yet was not torn apart and pulverized in its entirety. Large sections of the Wall were sawed into pieces, painted and transformed into art. The global symbol for division, espionage, permanent surveillance, constraint, dogma, captivity and death was symbolically liberated through art. Countless segments of the Wall still stand today all across the world as monuments to (very) recent history.

Since time immemorial, Berlin has been a refuge for artists from all corners of the creative world. The soul of Berlin has seen much come and go as it progresses ever forward, never idle, always in motion, even when this motion can seem rather casual and arrive somewhat late.

But suddenly something extraordinary was on the move.

Just after the fall of the Berlin Wall, when half of East Berlin had emptied out, a kind of positive anarchy prevailed across the city. The East German government was in a state of shock, of agony. Nothing was really clear amid all the political chaos. Many apartments and some entire buildings lay empty. Ownership claims had not been resolved or former owners were nowhere to be found. Students in search of housing and newcomers to Berlin proceeded to occupy apartments and buildings in the eastern half of the city, as well as in the west.

The three years after 1989 were the most thrilling phase of German reunification. And this was also true for the music and dance scene. Anywhere and at any time, DJs and non-professional organizations hosted spontaneous parties and entertained a whole generation of young people with electronic music.

These parties and DJs rang the ears of revelers in former Stasi buildings, in the Haus des Lehrers, at the Congress Center, in the small flower shop in the vast Ahornblatt dining complex, at the EX!T, in former Russian restaurants like Café Moskau and in the Cosmos cinema. Everything was happening in and around Frankfurter Allee, right at Alexanderplatz.

One of Berlin’s most legendary techno clubs was Tresor, which opened in 1991 in the vault beneath the former Wertheim department store dating back to 1929. The place was moist and smelled like rusty metal. The music was straight underground techno, loud and electronic. The air reeked of the vanilla scented additive used in fog machines; under the flashing of strobe lights, ravers danced to the hardest beats in the city.

When descending the stairs into the basement of Tresor, to the rusted safe deposit boxes of the former bank, you could no longer see the person right in front of you. But Tresor was no catwalk; it was not a place to see and be seen – people came there to dance. Whether or not you could see something through the fog was not as essential as the fat beats coming from the speakers. The dictum in Berlin was: first comes the sound system, then comes the rest of the club.

Planet, on Köpenicker Straße, directly on the river, was a Tresor rival as one of the most established and sought-after clubs in the city. There was always a line of people waiting to get in. And they were all natives. Berlin’s tourist boom had yet to begin.

Every day, during the day, was a party in the warren of old tunnels under Potsdamer Platz. The entrance to the club led through a hatch in the ground and down a chicken ladder. This had once been the busiest traffic intersection in Europe. But after World War II and during the GDR, it became a death strip riddled with mines. Now it was all being partied away at top volume, as if the remains of the East German regime were being pulverized by shock waves of musical force.

Many of the first parties and clubs were insider tips. You literally needed a secret code to gain entrance. There were telephone numbers you could call to get the lowdown on where and when to find the unadvertised locations and parties. You never knew where you would ultimately end up. It was pure thrill, true magic. A little research and every day you discovered new treasures of Berlin. It was an intense, spontaneous and liberating quest for the best and most extraordinary sounds of the city.

With no mandatory closing times, parties would rage on from Saturday night to Tuesday noon, or longer. Now and then someone would sweep through and clear out any lingerers, but then it would all carry on as before.

It was the candor and ingenuousness of and toward each and every participant, regardless of origin, profession or class, that made the techno music scene what it was. Everyone could behave as they wanted – everyone was unique and contributed to the colorful mosaic of the Berlin party set.

As this subculture developed, predominantly in the eastern half of Berlin, no one could have foreseen that techno music, above all, would spell the beginning of a pervasive culture that would pump real money into the city of Berlin’s empty coffers – not only by way of the Love Parade, which took place once a year and helped Berlin become a magnet for travelers.

Unfortunately, however, event organizers and the municipal government ran the Love Parade into a wall after 16 years – it has failed to take place in Berlin ever since. A few years after leaving Berlin, the Love Parade, then in Duisburg, was the site of a horrific tragedy resulting in 21 deaths, after which there would be no more Love Parades. All that remains is the legend and the mourning. Nonetheless, Berlin is still the place to be for techno and is famous the world over for its clubs and electronic music scene.

Around ten years ago, investors, with hopes of making gobs of money, declared Berlin to be their favorite city. They bought up building after building with the goal of creating a vast landscape of top-notch luxury housing, and renovated blocks of apartments to transform them into pricey condominiums. Properties and buildings that housed clubs were sold, including the home of the old Tresor. The site near Potsdamer Platz where Tresor was born in 1991 is now a giant mall.

The real-estate hype has killed the subculture and creative scene at the heart of many metropolitan centers. Lightness has been supplanted by darker forces. Gentrification is synonymous with bad vibes and with the expulsion of culture that no one in Berlin’s club scene and subculture was prepared for.

What is a city like Berlin without a colorful nightlife, without cabarets, bars, musicians and back-lot artists? What is Berlin without after-hours parties, without dance and music culture, without its smorgasbord of clubs and underground shops, without places where a vast array of cultures and people can meet, have fun, exchange ideas, evolve and learn from one another?

Politicians from various parties have filed motions to classify clubs as cultural sites, like operas, theaters and concert halls. This would relieve the budgets of many club operators, bolster the reputation of the club scene and award clubs the status of premium artistic enterprises. But even such a law would not rescue the clubs.

The COVID-19 pandemic has badly exacerbated an already dire situation. Clubs and bars in Berlin are vanishing into thin air. Clubs and DJs are producing DJ livestreams to raise money to save clubs. These efforts can at best serve as a stop-gap. Most clubs will not be able to survive the silence of live artists, many of whom have resorted to welfare assistance, as they are not permitted to work and can no longer make ends meet.

And the policy touted to rescue Berlin’s club scene? The concepts developed by an established club commission must be implemented swiftly. Neglect and procrastination are the biggest mistakes the city could make. Once the scene is gone, it won’t come back.

I hope the party’s not over.

Marusha
is a German electronic music DJ, television presenter, music producer and actress. She lives and works in Berlin. 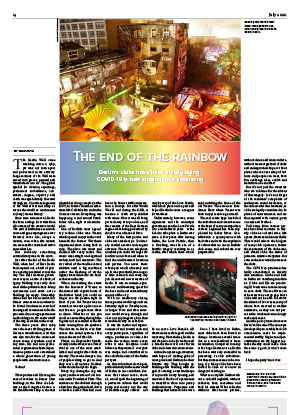