One of the low points of the trans-Atlantic relationship can be pinpointed precisely: June 19, 2018, 6:52AM EST. Presumably from his bedroom in the East Wing of the White House, US President Donald Trump clicked “send” in his Twitter app: “Crime in Germany is up 10% plus (officials do not want to report these crimes) since migrants were accepted.”

It sounds like a state conspiracy, one discovered by the American president: the German chancellor, interior minister and police have conspired to deceive the German people. But this tweet, too, to put it mildly, was an incorrect claim. The AfD gleefully retweeted the message: Trump, it said, obviously had precise information from his intelligence services.

The German government and the chancellor refuted the substance of the tweet. In reality, the crime rate was down 10 percent in 2017, and was at its lowest since 1992. The political damage was somewhat contained, but the aftershock continues to linger.

Countering “fake news” and other media hysterics spread and enflamed by Russia is old hat for Berlin – after all, during the Cold War, West Germany was the preferred target for disinformation campaigns by the KGB and the Stasi. But to be attacked like this by a political ally? That was something new.

Unfortunately, this is but one of many reasons to look upon the German-American relationship with concern. The majority of Germans harbor deep mistrust for Trump and consider him a danger to world peace. They are disappointed and distraught by his cavalier attitude toward the free press, the independence of the judiciary and other fundamentals of democracy – values that the Americans so successfully bequeathed to the vast majority of West Germans after the end of the Hitler dictatorship. The initial ironic response, the sarcasm about his rhetoric and the ridicule of his incessant narcissism have yielded to the recognition that this president must be taken very seriously.

Germans, in spite of all justified – and sometimes excessive – criticism, are fully aware of the depth of gratitude they owe the Americans, even if for decades only the western part of their divided country profited from it. Together with the Red Army, US soldiers liberated Germany from the despotism of the National Socialists. The Americans – in a move that of course benefitted their own economy as well– buried the Morgenthau Plan and launched the Marshall Plan. Decades later, after the fall of the Berlin Wall, they promoted reunification while the French and Brits had misgivings. But the Americans also had the confidence that the Germans had become a mature and responsible nation. The pride at having so decisively contributed to the evolution of the new Germany accounts for America’s trusting demeanor. In this sense, Germany has always provided some sort of self-affirmation for America as well.

In their short post-World- War-II history, the Germans have never had a better friend than the Americans. And when push came to shove, Germany was one of the more reliable friends of the US. Former Chancellor Gerhard Schröder risked his office by contributing to the NATO war effort in Afghanistan after 9/11. Two years after that, George W. Bush took Germany’s refusal to contribute troops to the invasion of Iraq as a betrayal.

So, how to handle Trump and the US in these trying times? Justified and openly voiced criticism is as important as the readiness for self-criticism. Germany’s trade balance surplus and its – in America’s eyes – inadequate defense expenditures had already been matters of concern for Clinton, Bush and Obama. They raised their concerns behind closed doors in a friendly tone – and each German government turned a deaf ear.

In recent months, some government officials have reread the farewell address US Secretary of Defense Robert Gates delivered to NATO in Brussels in June 2011. Gates warned that if burden sharing did not become more equitable, future presidents could strike a very different tone and follow a less lenient course. And so it has come to pass. For its external and, for that matter, its internal security, Germany relies largely on the US – the NSA and the CIA. This was true before and is still true after the disclosures of Edward Snowden.

Trump cites only the numbers that paint Germany as a stingy ally living shamelessly off the generosity of the US. The German government has – unsuccessfully – attempted to convince Trump that it is ready to make changes, even though his calculations are neither mathematically nor politically cogent.

So Trump is forcing the Germans to clarify their position. As a result, the federal government is being nudged towards more self-reliance while engaging in a more honest debate on external and internal security – and on what it will cost. For a country with this history and meager experience in strategic thinking, this is an enormous challenge – and yet perhaps also an opportunity, for Europe as well.

Although it is no certainty, it is comforting to assert that no presi­dent, not even the current one, can destroy the ties that link the American and German people. The grimmest predictions usually garner the most attention, but they are mostly false. Benjamin Franklin once said of the German immigrants in the US: “Those who come hither are generally of the most ignorant Stupid Sort of their own Nation.” One should take care, he wrote that they not “Germanize” the US. It turned out to be an ill-founded concern.

The quarrel over the Iraq war was followed by eight years of Obama, whom the Germans rhapsodized as they had Kennedy decades earlier. But half of America rejects Trump as fiercely as do the Germans. And while the prospect that things may still improve with this president remains bleak, there is the comforting thought that there will be a post-Trump period.

Until that time, Germany must proceed with self-confidence, criticism and self-criticism, but also with a healthy portion of strategic patience. Never give up on a friend – and certainly not when he’s in such dire straits as is this magnificent land with its less-than-magnificent president.

Katja Gloger
is a writer for the weekly Der Stern. She has been based as political correspondent in Washington, D.C. 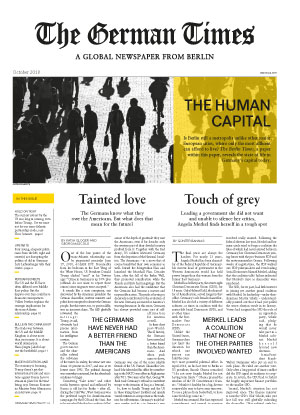