In December Angela Merkel gave up her post as head of her party, the center-right Christian Democratic Union, a far more important post in German politics than, say, the Democratic or Republican National Committee chair in the US. Her governing coalition of the CDU/CSU and the Social Democrats has run its course after six years – with officially two more to go. There has been a brew of simmering unhappiness in both parties despite a mostly solid working relationship. In the EU elections in May, both suffered dramatic losses, with Merkel’s party dropping below 30 percent. The CDU lost votes to the far-right Alternative for Germany (AfD) and to the center-left Greens.

Merkel has been Germany’s chancellor for 14 years. Her subdued style of government has seemingly gone out of fashion in our Twitter-frenzied times. Throughout all her years at Germany’s helm, the physicist by training has stuck to her patented mode of quiet negotiation, piecemeal policy engineering and clinical compromise.

Merkel is pleasantly free of both strong ideological predisposition and blistering vanity. In 2015, she put all her political capital on the line to let close to one million refugees having fled war and poverty, mostly from Syria, Iran and a handful of African countries, cross into Germany. It was a move both bold and humane – and the ripple effects it caused in German society continue to reverberate to this day. It has earned Merkel both praise and scorn internationally. The jury is still out as to Germany’s success at integrating the new arrivals.

Incidentally, during the worst backlash against her policy, which spurred the rise of the AfD, Merkel changed course. Immigration restrictions were tightened again while the deportations of rejected applicants for asylum were untethered from red tape. The EU-Turkey deal of 2016, capping the number of refugees entering the European Union through Turkey, was her brainchild and only passed by dint of her deft legislative acumen. Yet a broader perspective reveals she didn’t actually abandon her initial stance, but rather counterbalanced it.

A similar pattern can be discerned in two other major storylines of her chancellorship. After the Fukushima nuclear disaster, Merkel set faster target dates for the phase-out of nuclear power and laid out ambitious plans for the so-called Energiewende, a green-energy transformation. Often enough, however, Germany blocked initiatives in the EU to reduce emissions, protecting the interests of the big automakers who still wanted to sell their luxurious gas-guzzlers; and the phase-out of coal was postponed to 2038.

During the EU financial crisis – the most important story of the chancellor’s earlier years – she became known as “Madame Non” for her insistence on financial austerity. Repeatedly she allowed Greece to come close to having to leave the eurozone. In the end, however, Greece was bailed out with Germany absorbing a significant chunk of the cost. Chancellor Merkel’s opponents can be divided into two camps. One camp thinks that she does too much – the other blames her for not doing enough. After giving up her party post, she barely campaigned in the run-up to the EU elections. Contrary to their expectations, the Christian Democrats lost far more votes to the liberal and eco-friendly Greens than to the AfD, whose base consists of many former CDU-voters repelled by Merkel’s supposedly left-leaning course.

And yet, despite all the reports heralding the imminent end of the chancellor’s reign, there is a third camp of Germans with strong and positive opinions of her: She still enjoys the highest approval rating of any politician in the country. And indeed, after each media outlet had penned her political obituary earlier in the year, Merkel soldiered on undeterred, a true dealmaker at home and on the international stage, never quite “winning,” but certainly not losing either. To put it in more prosaic, Merkelian terms, she has simply continued her quest for workable solutions. She will be missed the second she’s gone. 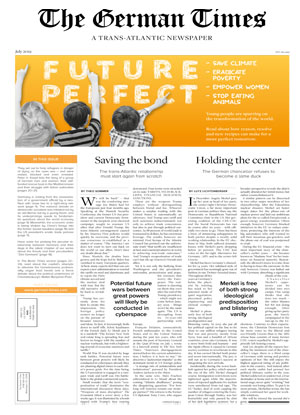