You have to give Donald Trump credit for at least one thing: He never hid his feelings about China. One year before he was elected 45th president of the United States, he wrote in his manifesto Great Again: How to Fix Our Crippled America: “There are people who wish I wouldn’t refer to China as our enemy. But that’s exactly what they are.”

An erstwhile trading partner becomes a stated enemy – it’s hard to imagine a greater break from the tradition of US economic policy. And in the more than two years since his presidency began, Trump has pursued this rupture as consistently as he could. He pulled out of groundbreaking trade agreements, including the TPP with Asian-Pacific states and the TTIP with Europe. He continues trying to incapacitate the World Trade Organization (WTO). And he has imposed a wave of punitive tariffs – the likes of which have not been seen since World War II – that are directed at countries on virtually all continents.

This protectionist approach is completely new for the traditionally economically liberal United States. The policy still seems to be polling well among Trump’s followers. But the actual economic and political balance sheet associated with this new approach is showing negative figures. The president is alienating countries that have been close partners for decades, thus doing tangible harm to his own country and the global economy as a whole, while also failing to meet his publicly proclaimed goals. Even the forthcoming deal with China – if it actually comes – will not be able to make up for this catastrophe.

The logic behind Trump’s punitive tariffs is that by making foreign products more expensive, they will prompt US consumers to purchase domestic goods instead. However, despite the duties levied on many of its partners, the US trade deficit shot up by a whopping 20 percent to reach €620 billion in 2018. This was its highest level in 10 years. America the weak.

Even those who insist that Trump’s punitive measures will begin to show a marked impact starting this year will have to acknowledge the problem: Politicians cannot simply switch on the demand for domestic products, as Trump suggested he could while addressing the frustrated industrial workers in the Rust Belt. In fact, consumers often end up buying foreign goods anyway, in spite of the customs duties, simply because those goods are of better quality, or because US products are much too expensive, or because they’re not available at all. In recent decades, the US economy has relied on services, in particular on the financial industry and digital services, while US heavy industry slumped – or had bulk goods produced abroad.

In addition, the nations that are targets of Trump’s punitive tariffs usually tend to strike back and increase the price of US goods in their own countries – goods that consumers then usually leave to gather dust on the shelf. In turn, this has a negative impact on the US trade balance.

In macroeconomic terms, the tariffs are also highly doubtful in the first place. We see this in the steel and aluminum sectors, where Trump took measures against his economic partners across the board. As a recent study by the Boston Consulting Group showed, this approach did indeed benefit US steel manufacturers in the short term by helping them sell more and increasing their profit margin by 5 percentage points to 14 percent. And yet, investors have little faith in such a trend because they simply don’t believe in any long-term effects. As a result, despite their higher profits, the manufacturers’ share prices nosedived.

Plus, much more importantly, Trump has made production more expensive for all US companies that use steel. “Metal processing and steel-dependent companies, where easily 10 to 20 times the number of people are employed than in the steel industry, face great challenges,” wrote Boston Consulting in their report. “Higher steel prices negatively impact their profits and lead to lower-level competitiveness as well as job losses.”

The fact that Trump is scaring off previous partners is also bound to have a negative economic and political impact. For decades, Europe was Washington’s closest partner on the international scene. But the president failed to take advantage of the opportunity to increase US exports via the widely negotiated TTIP trade agreement as well as the chance to agree on joint technological standards that would keep their mutual global competitor, China, at a distance. Instead, Trump continues to snub Europe, accusing the former allies of playing economic tricks on the US.

By targeting the auto industry, Trump is taking aim at a sector that is particularly important for Germany. Since February, he has had a report on his desk issued by the US Department of Commerce exploring the absurd question of whether the mass of European auto exports endangers US national security. Trump now has until mid-May to impose punitive tariffs of around 25 percent on European cars. If he makes this move, it would trigger a first-ever showdown between these formerly close allies. In July 2018, after a meeting with European Commission President Jean-Claude Juncker, Trump suddenly announced that an agreement was in the works; however, nothing specific has been agreed upon since.

For the past several months, the Europeans have been waiting to see what happens to the major conflict launched by the US government with China. Trump slapped unprecedented tariffs on that country, its burgeoning rival for the title of world’s largest economic power. If we include the Chinese counterstrikes, the value of the goods on the list of punitive tariffs reaches $350 billion. And yet, the US trade deficit with the Middle Kingdom nevertheless swelled to €420 billion in 2018, even though Trump kept on signaling that a monumental deal with President Xi was on its way.

In the meantime, the damage
to the global economy continues
unabated. The aggressive
posture of the US – that
former paragon of free trade – is unsettling companies everywhere on the planet. According to the WTO, global trade is likely to grow by a mere 2.6 percent this year. This is roughly half as much as in 2017, thus marking a massive drop-off. Trump’s neo-nationalism is coming up against a global economy that is less nationally oriented today than ever before. Some 70 percent of global trade consists of intermediate products, auto parts and microchips headed for installment in some device. The escalation of tariffs throws a wrench into this international division of labor in manufacturing. For example, 30 to 40 percent of Germany’s prosperity is dependent on this globalized economy, estimates Gabriel Felbermayr, president of the Kiel Institute for the World Economy.

Trump is, in effect, putting a match to the very economic model the US established on an international scale after World War II: open markets, open investment, transparent rules and states that see themselves as economic partners rather than political and military enemies. 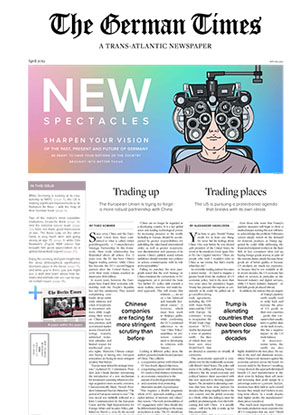