In the fall and winter of 1989– 90, the entire world watched in anticipation as events unfolded in Germany. It seemed that every day brought something that would have been considered impossible only a day earlier. The highpoint was the evening of Nov. 9, 1989, when the Berlin Wall – that decades-long symbol of communist rule over half of Europe – came tumbling down.

Today, individual pieces of the Wall can be found everywhere in the world. They remind people of the boundary that once divided Berlin, Germany, Europe and the world, a border that functioned as a symbol of bondage and dictatorship. The word Stasi – short-hand for Ministerium für Staatssicherheit, or the East German secret police – has entered many languages across the globe as a synonym for police oppression, and it continues to this day to symbolize communist dictatorship and its apparatus of oppression and surveillance.

The Wall was the most visible expression of an all-encompassing police state that imprisoned an entire population behind a concrete and barbed-wire fence. Several sections of this Iron Curtain were preserved and set up in the United States, as well; for example, in the park belonging to the presidential library of Ronald Reagan in Simi Valley, California.

It was Reagan who spoke those famous words on June 12, 1987, at the Brandenburg Gate in West Berlin: “Mr. Gorbachev, tear down this wall!” Reagan inspired millions of people held captive behind the Wall and assured them that the free world had not forgotten them.

The Wall was ultimately torn down by East Germans, but also by citizens of Poland, Czechoslovakia, Hungary, Lithuania, Latvia and Estonia. The Poles were the first to start chipping away at the Wall in 1980 by means of their anti-communist Solidarity movement.

When East Germans finally tore down that Wall on the night of Nov. 9, leaders in London and Paris hesitated to support the prospect of German reunification. Poland and the US took a different stance. President George H. W. Bush immediately assured the Germans that the US would stand at their side as a reliable partner and do everything possible to make sure they regained their state sovereignty and unity as quickly as possible. Bush was Germany’s most important friend in this moment, and his steadfast policy toward the country quickly forced the remaining former allies, including the Soviet Union, to abandon their blockade stance toward German reunification.

Although these foreign policy developments were indisputably important factors in the realization of German unity, a passionate argument is currently being waged among the country’s historians and historical witnesses as to who exactly in the GDR was most responsible for the success of the revolution against the dictatorship overseen by the Socialist Unity Party (SED).

Oct. 9, 1989, one month before the Wall would fall, is the symbolic day of the East German revolution. On that day, more than 70,000 people took to the streets in Leipzig to demonstrate against the communists. The state did not intervene, and the massacre that many feared did not take place. Just days prior, high-ranking SED functionaries had expressed admiration for their Chinese counterparts for their handling of the opposition movement in that country, where hundreds of civil rights activists had been massacred and thousands others arrested in Beijing and elsewhere in early June 1989. In East Germany, by contrast, the SED leadership capitulated in the face of the unexpectedly large masses of people on the Leipzig streets. After all, revolutions never succeed in strong regimes.

Roughly five decades ago, Albert Hirschman (1915–2012), a German-born economist and social scientist who taught in the US, described the charged relationship between involvement and migration using the terms “voice” and “exit.” And it was precisely because these two forces of “speaking up” and “leaving” came together in the GDR that the East German dictatorship fell. In fact, research has long since shown that there was more than simply one trigger for the East German revolution. The system was ailing; the economy was running on empty; the political elites were incapacitated; the loyalty of followers had cracked; and Gorbachev in Moscow was no longer willing to sustain the status quo.

But the SED regime did not fall all by itself. A collapse of this nature requires the active participation of individuals. Some left, some fled. Either way, they contributed considerably to the destabilization of the system. In response to the waves of people attempting to leave the country, the active opposition called out in a defiant tone: “We are staying!” And, indeed, most people did stay, that is, they stayed in their homes and waited – as is the case in every revolution, because otherwise there would be no one left to revolt. The ones who stayed at home would turn out to be the benefactors; they were given democracy, freedom and the rule of law without having lifted a finger. Historically speaking, this, too, is quite normal.

The New Forum, founded on Sept. 9–10, 1989, along with other new citizens’ movements, offered a space for public communication for the first time. Within only a few weeks – by the beginning of October – thousands of people had started taking advantage of this opportunity, yet all at great personal risk. The GDR was changing from below.

People weren’t taking to the streets by accident. Those who succeeded at bringing the Leipzig Monday demonstrations out of the churches and into broader society were oppositionists who had organized themselves illegally years prior to 1989 in Leipzig. Without their idea of taking to the streets after Monday prayers, which they began doing in early September, the famous Monday demonstrations most likely would never have occurred.

No one is claiming that the civil rights movement alone led to the revolution. However, for a revolution to unfold in the first place, a pool of like-minded people has to form. The founding of the New Forum created the space for such a reservoir of individuals. The idea of moving from the churches and onto the streets was an offer they made to society – an offer so broadly worded that it was able to reach even critically minded members of the SED. Within only a few days and weeks, tens of thousands of people had joined the New Forum.

There were massive police attacks and many arrests at the demonstrations. The people chanted “No violence!” in defiance of the powers of state and called on those of their fellow citizens who were still hiding out at home: “Fellow citizens, stop watching TV and come out and join us!” Most people who didn’t refrained, which was understandable considering the intimidating police presence.

Word of the events quickly spread around the globe. But how did the word get out in the first place? The East Berlin oppositionists Aram Radomski and Siegbert Schefke are to thank for that. They shook off the Stasi guards following them, drove to Leipzig and filmed the mass demonstrations at great personal peril. They then smuggled the footage to West Berlin via a Western correspondent with whom they were friends. The footage then began its iconic march around the globe. Without this footage shot by these two men and without the initiative of the Leipzig-based oppositionists at the Monday demonstrations, the revolution would likely have taken a demonstrably different path. It was this footage that turned the mass demonstrations into an irreversible event that could no longer be denied. And above all, it served to motivate thousands of other people.

Perhaps the revolution in the GDR might have taken place even without the oppositionists. Who knows? But one certainty is that it played a decisive role. We also know that communism did not simply disappear, not in Romania not in Bulgaria and especially not in Poland, Hungary, Czechoslovakia and the Baltic states, where organized oppositions were critical to it being overthrown.

There are two erstwhile examples that prove that it’s not always so easy to bring down a dictatorship. In Cuba, which is just as rundown as the GDR was, absolute rule shows no palpable signs of being dismantled. North Korea is an even more drastic example – the state remains so strong that a breakdown seems inconceivable. However, as history teaches us – even in North Korea, and just like in the GDR – should the state show signs of wavering, a revolution will remain out of reach but for the infectious courage of those few individuals who motivate the larger population to rise up.

Ilko-Sascha Kowalczuk
is an author and historian at the Stasi Records Agency. Kowalczuk is also on the national commission to mark the 30th anniversaries of the Peaceful Revolution and German reunification. 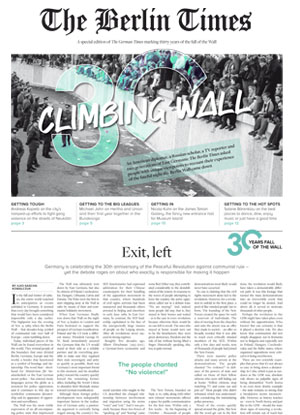