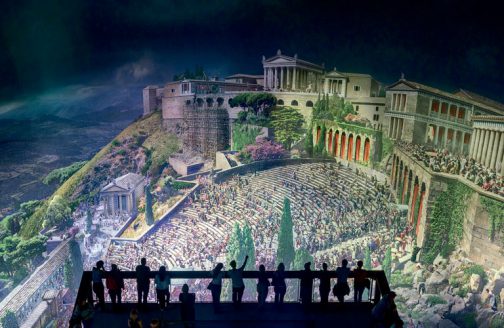 West Germany’s “Economic Miracle” in the 1950s was more or less driven by the coal and steel industries in the Ruhr Valley. The myth of the Federal Republic climbing its way out of the fiscal hole left by the war through backbreaking, honest work is based on the media imagery of the time: toilers and machines in meaningful harmony, hard-earned transformation leading inevitably to pervasive middle class prosperity. One of the photographers responsible for anchoring this breakthrough atmosphere in the country’s memory was Ludwig Windstosser (1921–1983). His company portraits conveyed the era’s sense of aspiration and rebirth and prompted him to become a leading industrial photographer in postwar West Germany.

Steep perspectives, unusual detail shots and stark contrasts were the trademarks of postwar avantgarde photography, for which Windstosser may well be the most suitable poster child. Although he was the most successful industrial photographer of his day, with his style informing that of countless others, he has largely been forgotten, just 35 years after his death. Berlin’s Museum of Photography now intends to rectify that situation. The museum will provide comprehensive insight into Windstosser’s life and work in an exhibition set out to be more comprehensive than all previous shows featuring this influential photographer.

The aesthetic of Windstosser’s work is born from an understated sense of optimism that pervades all of his photographs, despite the sobriety of the imagery he uses. Windstosser is far removed from the bleak, socially critical realism of earlier and later decades. His urban portraits exude their era’s firm belief in progress as the subjects’ increasingly confident attitude toward life in cities like Berlin and Stuttgart shines through, predominantly in black and white.

This spirit of optimism also radiates from the volume of photography Windstosser published in 1972 titled Berlin: teils – teils (Berlin: partly – partly). The book is a portrait of West Berlin during its reconstruction and modernization, a time marked by a strong desire for normalcy and security.

The exhibition presents more than 200 works in an attempt to do justice to Windstosser’s versatility as a photographer; alongside his most familiar images of industrial West Germany, visitors can peruse his more overtly artistic work and landscape photographs.

A full day in the ancient city of Pergamon, from sunrise to sunset and deep into the night – this is the story told by Austrian-Iranian architect and artist Yadegar Asisi by way of his 360- degree panorama in the temporary exhibition hall directly across from the Pergamon Museum, which is currently undergoing renovations. The gigantic image depicts scenes from everyday life in the historical metropolis on the coast of Asia Minor during the reign of the Roman Emperor Hadrian (117–138 AD). From a lookout tower in the middle of the panorama hall, visitors can immerse themselves in the general atmosphere of Pergamon as well as in the finer details of its citizens’ lives. The many scenes depicting life in the ancient city are burnished by numerous spectacular antiques from the museum’s permanent collection, allowing viewers to appreciate the works of art in their historic context while conveying their original effect. A rather sophisticated lighting scheme helps visitors to focus on individual episodes and groups of figures, to follow the course of one day in the ancient city and to gain a bit more intimacy with the material on display.

Over the past 15 years, Yadegar Asisi and his team have captured much attention for their two permanent panorama halls in Dresden and Leipzig, each of which is enhanced by a series of alternating paintings. The current Pergamon panorama is a complex reworking of a previous project that premiered to great acclaim at the museum in 2011. For the current presentation, Asisi’s team conceived of an exhibition in which 80 masterpieces from the museum’s permanent collection would be presented in exquisite installations. As such, visitors encounter the originals first before experiencing them in the panoramic visualization of the historic city, which is based on the fruits of years of archaeological and architectural research. The temporary exhibition project is expected to run until 2024, when the Pergamon’s extensive renovation is scheduled to reach completion.

PERGAMON. Masterpieces from the Ancient Metropolis with a 360° Panorama by Yadegar Asisi In the Panorama hall across from the Pergamon Museum. www.smb.museum

ARRIVAL ON THE SCENE

In the late 19th and early 20th century, the idea of a woman pursuing a career as an independent artist would have been seen as next to impossible in Germany. This also applied to women everywhere in Europe, for that matter. Nevertheless, several individual women succeeded in doing just that, struggling to find a place of their own in a world dominated by men and managing to gain recognition for their work. The Museum Island’s Alte Nationalgalerie has now given these artists their own exhibition: Fighting for Visibility – Women Artists in the Nationalgalerie before 1919.

The show’s historical point of departure is 1919, the first year women were permitted to study art at the Berlin Academy of Arts. The upheaval of World War I had altered society to a degree that equal participation in a variety of fields was no longer prohibited. Just a few days after the ceasefire, women in Germany obtained the right to vote, and the following few months would see the eradication of many other limitations. From 1919 onward, women gradually achieved full access to the Academy of Arts, as well as scholarships, grants and important commissions. They had finally arrived on the art scene.

Yet the Berlin exhibition is dedicated to those women who, even in the face of mountains of resistance, asserted their artistic selves and forged their own rocky paths prior to the breakthrough year of 1919. They joined and created art associations, vied for exhibition appearances and made themselves increasingly visible and attractive to important patrons, all of which helped lead to prestigious commissions and sales. These few extraordinary and diverse artists would go on to make a critical contribution to the art scene of their day.

The Alte Nationalgalerie exhibition features more than 60 paintings and sculptures – all created before 1919 – by women artists spanning 140 creative years, including paintings by Caroline Bardua, Elisabeth Jerichau-Baumann and Dora Hitz as well as portraits and historical tableaus by Friederike O’Connell and Paula Monje. Also on display are several successful women artists who have been mostly forgotten over time, such as the Norwegian sculptress Ambrosia Tonnesen, the salon painter Vilma Parlaghy – who was also popular in the US – and the Russian avantgarde pioneer, Natalia Goncharova. 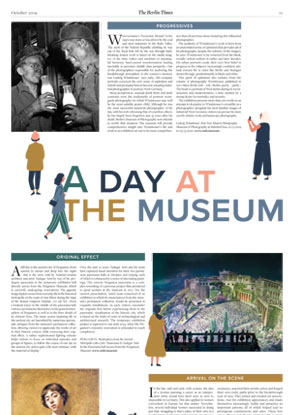