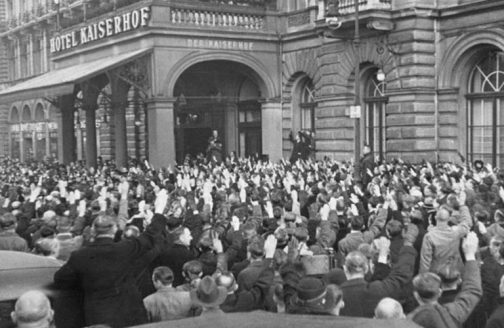 Germany, November 1932. These are dark times for the Weimar Republic. While still alive, democracy is but hanging by a thread. Unemployment is dramatically high – more than five million Germans are out of work. Fights are breaking out in the streets. There’s a whiff of civil war in the air. The Reichstagswahlen – the national parliamentary elections – already the second of the year, have again failed to yield a governing coalition. The National Socialist German Workers’ Party under Adolf Hitler comes in ahead of all other parties; still, with 33 percent of the vote, it has incurred significant losses. Meanwhile, the Communist Party, at 17 percent, is gaining in popularity.

The center does not hold. Against the two extremist parties, the Social Democrats and the center-right Zentrum party are further weakened. The two moderate parties, which have been holding Germany together for the 14 years since World War I, win a mere 35 percent combined. The situation is in deadlock.

Chancellor Franz von Papen, a monarchist at heart, is able to remain in office only by way of special powers granted to him by President Paul von Hindenburg. Adolf Hitler, his cronies and henchmen are getting nervous. Just this summer, they saw themselves on the verge of seizing power, with Hitler one election away from the chancellery. Now, the party with seemingly unstoppable momentum is suddenly running out of cash, with factional divisions beginning to show within the ranks. Hitler and Gregor Strasser, his main intraparty rival, with socialist leanings to boot, cannot agree on a way forward. The old Prussian elites inside the Berlin beltway are clinging to power, and the radical Nazi upstarts cannot see how they can rise to the highest ranks of government legally, through elections, as long as Hindenburg and his constitutionally guaranteed emergency powers keep von Papen’s cabinet in power. It’s time to scheme their way to the top. But how?

Such is the premise of a new book by two German historian journalists that has become a surprise bestseller since its publication last April. Historians have dismissed Die Totengräber. Der letzte Winter der Weimarer Republik (The Gravediggers. The final winter of the Weimar Republic) as a non-scholarly book. Newspaper critics – and readers – on the other hand, have embraced the blow-by-blow account of the 75 days before Hitler become chancellor and Germany descended into 12 years of tragedy, death and destruction.

Rüdiger Barth and Hauke Friederichs tell their story in the present tense while documenting official records and quoting extensively from diaries, letters and the newspapers of the day. And then they throw in a little trivia and few spoonfuls of gossip.

It all makes for a disturbing, and entirely intoxicating read. The authors themselves credit the American TV show House of Cards as an inspiration, claiming the machinations underway in Germany during the Weimar Republic were just as shifty but in fact more gripping – after all, they did actually happen. The cast of characters provides the full gamut of gruesome archetypes without any clear-cut heroes for relief.

There’s the larger-than-life Paul von Hindenburg, a 77-year-old World War I field marshal who had never been a politician but was so admired for his role in the Battle of Tannenberg in 1914 that 11 years later he was called upon by still-influential monarchist elites to run for the presidency, which he won with 48 percent of the vote. In 1932, the 84-year-old head of state did not care for democratic values and sought to keep his protégé Franz von Papen as chancellor. The sharp-tongued Harry Graf Kessler quipped that von Papen “looked like a grouchy billy goat trying to snap to attention. A figure straight out of Alicein Wonderland.” The chancellor is backed by the fat cats and industrial elites who care not a whit about growing income inequality, people freezing in their unheated apartments and the most destitute actually starving to death. His long-time ally and Minister of Defense, Kurt von Schleicher, is well aware of von Papen’s unpopularity and misguided policies. But hardly a straight-shooter, together with his military friends, von Schleicher concocts a secret service report outlining the danger of an imminent civil war between Nazis and communists – if von Papen stays in power. Von Schleicher alone can “fix it” and save the republic! Von Papen’s cabinet members defect and on Dec. 2, 1932, Hindenburg is forced to appoint von Schleicher.

Kurt Schumacher, a young, up-and-coming Social Democrat who would like to fill the role of the smart and principled politician, sees von Schleicher as “an office Napoleon, an opportunist, despite some modernist leanings, a man of the authoritarian state, an anti-democrat, a monarchist, a prisoner of his ancestry and his cast” – and someone who had to be opposed by all possible means.

The new chancellor’s plan is indeed to come to the help of low-income workers – to appease the left, including Social Democrats and Communists. And to split the Nazi party apart by making Strasser, Hitler’s NSDAP nemesis, vice chancellor. It is a shrewd move by a dubious character.

Meanwhile, Hitler has become restless. It has been his stated purpose to go all in, to give in to no compromise, to join no coalition without him and his party at the helm. But now he fears being left out in the cold again. He is uncertain how much support he can rally among the ranks of the NSDAP to oppose Strasser. He is so distraught that he contemplates suicide. “If the party falls apart,” Hitler confides to his sycophantic spokesman Joseph Goebbels, “I will be gone in a matter of three minutes.”

The unspoken take-away from Barth’s and Friederichs’ sober account is that it all did not have to happen, that Hitler’s rise to power was not inevitable. The many twists and turns of the unheroic saga provide all too many moments when history – or rather upstanding, sober old white men – could and should have intervened.

But von Papen, vengeful and delusional, cannot come to grips with being ousted from the chancellery. With the help of rich industrialists, he conspires with Hitler. Von Schleicher’s feeble social initiatives fail, as do his attempts to bring the indecisive and duplicitous Strasser on board. In a last-ditch eff ort, the beleaguered chancellor demands dictatorial powers from von Hindenburg. The president, with some influence from his close advisor, his son Oskar, denies von Schleicher and – hoping that von Papen, now as Vice Chancellor, will be able to contain him – appoints Hitler chancellor on Jan. 30.

When Paul von Hindenburg dies in 1934, Hitler assumes the presidency by fiat. That very same year, the Nazis oust Franz von Papen and the rest of the cabinet’s old elite. Von Papen becomes ambassador to Turkey. Later, after being convicted as a war criminal by a German de-Nazification court, he would spend two years in prison. On Hitler’s orders, Kurt von Schleicher and Gregor Strasser are murdered by Nazi henchmen during the wee hours of June 30, 1934, the Night of the Long Knives. 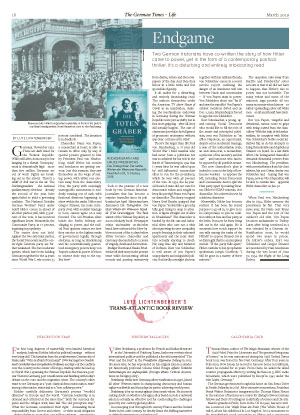