It was mid-August, just before regional elections in Brandenburg and Saxony, when German President Frank-Walter Steinmeier called for a “new solidarity pact.” What the president was demanding was not more money, but a “solidarity pact of appreciation,” especially for achievements during eastern Germany’s peaceful evolution and the transformation of its economy from socialist planning to the capitalist market.

The transformation of eastern German that began in 1990 was an immensely painful one. The deindustrialization of entire regions, mass unemployment and subsequent exodus of more than four million people, most of them well-educated and trained, were a heavy blow for Germany’s east – and one that, even 30 years later, has yet to be overcome. Indeed, the “wounds of the post-revolutionary period,” as Saxony’s integration minister Petra Köpping calls them, are now re-opening in earnest.

The original Solidarity Pact is a financial aid scheme for the eastern German states initiated by the federal government and Germany’s west. The funding was meant to help the financially weak “new” states tackle infrastructural necessities caused by Germany’s post- WWII division, such as replacing old bridges and roads, modernizing the east’s antiquated towns and removing hazardous waste. The Solidarity Pact will end on Dec. 31, 2019, having run for nearly 30 years – which is far longer than anyone originally thought.

In 1995, it replaced the German Unity Fund, which provided the eastern states with a new financial foundation beginning in 1990. It quickly became clear that their financial needs were bigger than expected and that it would take longer to get the region back onto its feet economically.

That was why Germany and its federal states created the Solidarity Pact. It took effect in 1995, the same year the eastern German states were incorporated into the Federal Republic’s equalization payments scheme. To finance it, the federal government contributed a bigger share of the sales taxes it collected and also agreed to compensate those states with sub-par financial resources through a special fund.

Western states such as Saarland, Bremen, Rhineland-Palatinate and Schleswig-Holstein benefited from the scheme, but above all it helped the eastern states.

In addition, up until 2004 the federal government transferred €20.6 billion annually to the eastern states and Berlin. Those states’ economies grew quickly in the 1990s, thanks to the post-reunification construction boom, but since the year 2000 have been stuck at only about 75 percent of their western counterparts’ average economic output.

It quickly became apparent that a second Solidarity Pact was needed. It was agreed after long negotiations between the federal government and the states, to run for an additional 15 years – through 2019 – and to deliver a total of €156.5 billion. Two-thirds were supplied through the equalization payments scheme, and the rest directly by federal coffers.

As with the first Solidarity Pact, the eastern states had to provide annual accounting of how they used the funds, which were intended mainly for investment. Critics pointed out that some states were using the money to plug their own budget deficits. According to the accounting reports, only Saxony used all its funding as intended.

Today, as the eastern states continue to lag far behind their western counterparts in terms of economic and financial resources, some political leaders have called for a third Solidarity Pact. But, once again through difficult negotiations, the federal government and states found an alternative. Now, the equalization payments scheme will instead provide more money. Special payments to the east will be a thing of the past – an important sign, not least of self-assurance – 30 years after the fall of the Berlin Wall.

The sum of the two Solidarity Pacts has totaled around €300 billion. Anyone visiting eastern Germany today can see where the money went: Autobahns and other roads are mostly up-to-date, towns with their (often historic) urban ensembles have been modernized and contaminated environments are a thing of the past. The most important goal, however, that of a self-sustaining economy and, thereby, self-sustaining finances for the eastern states, has not yet been achieved.

This is partially because companies once based in the east – whether corporations, family-owned firms or skilled trades – headed west following World War II and the subsequent division of Germany. Audi, Siemens and Zeiss are but three prominent examples. Some companies established subsidiaries in the east, but the tax revenue they generate gets sent west, to the company’s headquarters.

The immense transfer of property (companies, buildings, land) from east to west following 1990 is likewise reflected in tax revenue. Today, much eastern German property is inherited by individuals living in western Germany, where the inheritance tax is 15 times as high as in the east. This has given rise to new initiatives, such as one by the premier of Saxony-Anhalt Reiner Haseloff, who is demanding a new distribution of tax revenue.

But the costs of the Solidarity Pact cannot be understood as a purely east-west invoice. The former president of the Halle Institute for Economic Research, Ulrich Blum, pointed out years ago that the millions of eastern Germans who today work in the west have generated about half of the transfer payments themselves, through the taxes and social contributions they pay. The other half is generated by additional growth in the west, as western German companies sell far more in the east than vice versa. Western Germany, Blum said, began profiting from reunification long ago.

The issue of funding for the east remains a sensitive and potentially polarizing one. Yet former German Finance Minister Theo Waigel has urged his compatriots to take a quote by Ernst Jünger to heart: “When your brother is standing at your door, you take him in without asking what it costs.”

Stefan Locke
is the political correspondent for Saxony and Thuringia at the Frankfurter Allgemeine Zeitung. 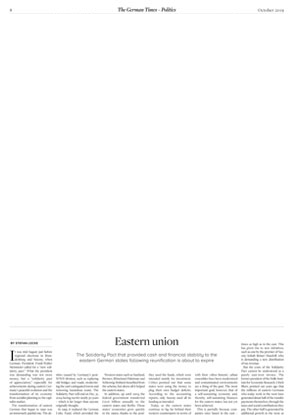