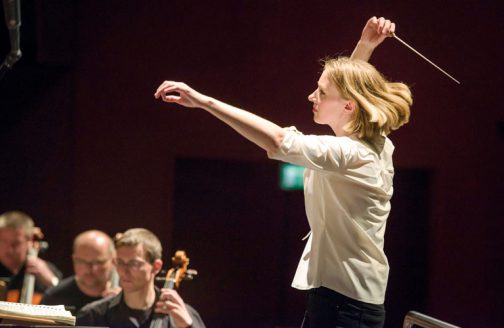 They do, in fact, exist – women in leadership positions in Germany. Janina Kugel and Lisa Davis, for example. And, since the beginning of this year, Birgit Bohles. The first two women are board members at Siemens and the third recently made it onto the board of directors at Deutsche Telekom. There are others, as well: Renata Jungo Brüngger and Britta Seeger, for example, are two management executives at Daimler AG responsible for legal issues and sales and distribution, respectively. Seeger was appointed to the executive board at the automaker two-and-a- half years ago and is now the third woman in the history of the 130-year-old, Stuttgart-based company to occupy a position on its highest governing body. And that says it all: women are pushing their way into traditionally male-dominated domains, but they remain exotic creatures there, embodying the eminent exceptions that prove the rule. And the rule in Germany is simple: men continue to have much greater opportunities to attain leadership positions thanks alone to their gender.

This applies not only to large corporations listed on the stock exchange. It applies equally to the startup sector and to the world of fine arts – in spite of its vast diversity – where a male name above all promises success. Of course, there are also some women in leading positions in these worlds. But they are few and far between, and can hardly refute the fact that it’s typically gender rather than capability that determines an individual’s career ascent.

Joana Mallwitz, for example, is a young conductor currently making her way up the ranks as General Music Director at Staatstheater Nürnberg. Still, her budding career is meager consolation to all the hopeful young female artists out there. After all, hardly any other field of work is more sexist than classical music.

For almost 14 years now, Germany has been governed by a woman. When Angela Merkel was sworn into office in the Bundestag in November 2005, she made history as the first woman to head up the Federal Republic. A whiff of fresh optimism then wafted over the country with regard to the future of women. Many women saw their chance as having arrived. Today, however, there is no longer any trace of that fresh air.

On the contrary, the number of women in politics is on the decline, even in the Bundestag. The share of female parliamentarians fell from 36.5 percent in the previous legislative period to 30.9 percent today. In late 2018, on the occasion of the 100th anniversary of women gaining the right to vote in Germany, the chancellor lamented the low numbers of women in leadership positions in politics and business. She pointed out that Germany’s current parliament had no more female members than even the national legislature of Sudan.

It is worth noting here that the chancellor never saw herself as a champion of equal opportunity for women, preferring instead to allow others to fight that battle. That is to say she behaved much like many of the other exotic females who’ve made it to the top. Indeed, most of that tribe of women prefer not to talk about the topic and seek to avoid it whenever possible. In no way do they want to be associated with the idea that their gender – not their performance – had anything to do with them reaching their top spot.

There is another way to portray the malaise associated with women’s opportunities for advancement in Germany. This approach does not draw on famous individual cases – those examples that are so impressive precisely because they are the exceptions to the rule. It instead focuses on sheer data. A 2019 study by the Swedish-German Albright Foundation compiled data on the topic of diversity with researchers there coming to the following conclusion: “The increase in the number of women on the boards of Germany’s 160 publicly traded companies was so small last year that it roughly corresponded to the increase in the number of men named Thomas in the same time period.” Today, the share of women on the boards of listed companies in Germany is 8 percent, lower than in almost any other Western industrialized country. The previous year, that number had been 7.3 percent.

And there’s more: roughly one-third of companies listed on the German Stock Exchange have explicitly issued a target of zero women on their boards. The line goes something like this: “For the period after June 30, 2017, the supervisory board once again sets the target level with regard to the percentage of women on the supervisory board and management board of Sixt SE at 0 percent with an implementation deadline of June 30, 2022.” In other words, many companies don’t even want women in the first place.

This is the case even though the federal government passed a law in 2016 introducing a 30-percent quota for women on supervisory boards. Since then, the law has stated that seats vacated on supervisory boards must be filled with women until they reach a share of 30 percent.

The motivation behind this law reflects the above-mentioned spirit of optimism: the hope is that more women on supervisory boards will lead to more women on management boards, which are at least formally filled by members of supervisory boards. Unfortunately, we are now forced to conclude that this attempt has not worked for women so far.

Furthermore, things don’t look any better at Germany’s universities, where only 23 percent of professors are women, even though there are now more and better educated female academics than male academics. In the realm of film, radio and television, the situation is not much different. Women receive less film funding and the industry shows a negligibly low percentage of female directors. And circumstances in the realm of classical music are even worse: there are hardly any women in leadership positions at the multitude of opera houses and concert halls that make up Germany’s unique cultural landscape. Female orchestra members rarely assume leadership roles and contemporary female composers are hardly ever performed.

And why is that?

Germany has been debating this topic for years. Time and again, a number of widely accepted explanations are given as the cause, such as the glass ceiling, steadfast male alliances that have made it their mission to hold women back rather than foster their advancement, and the still lacking infrastructure for childcare. These are accompanied by the theory of unconscious bias, which holds that society – including women themselves – rates women’s achievements in a much different way than men’s due to internalized gender-specific stereotypes.

There’s no better place to observe this bias than in startup financing rounds, where it has been scientifically proven that the mostly male investors evaluate identical business plans differently – and prognosticate different chances of success – depending on whether the plans were submitted by a man or a woman. “A female name in and of itself will cost a female founder 40 percent of the potential financing amount,” notes the well-known US neuroscientist Vivian Ming, who founded companies first as a man and then, after a sex change, as a woman. She experienced the phenomenon first-hand and later analyzed the bias using data from 100,000 male and female founders.

Interestingly, there is also a specifically German factor at play in this realm, namely the idea that women themselves are to blame for the abysmal state of affairs. According to a survey carried out by Eurostat, almost half of all women in Germany between the ages of 20 and 64 work part-time. In the rest of the EU, the figure is 30 percent.

Moreover, most women in Germany responded that they were satisfied with their part-time status and had no intention of changing it at any time before retirement. In other words, German women resist making themselves fully available to the labor market over the entire course of their lives. And they are doing so with full knowledge that – at least according to current German law – not only will they have no choice other than to remain permanently dependent on their life partner, but they are also setting out on a direct path to poverty in their old age.

Women cite all sorts of reasons as to why they have a preference for part-time work. These include a lack of reliable childcare, men’s reservations with regard to women’s capabilities and other preconceptions to which women simply have no desire to expose themselves in the first place. They also point to the often annoying and cutthroat tactics one sees in many organizations where employees stop at nothing to gain influence and power. Some women even cite the perceived loneliness felt by individuals in leadership positions. In other words, why should a woman even pursue a high-level career?

This attitude is one of the reasons why things never change for women with regard to their power and influence in the worlds of business, science and politics. It should be no surprise that when almost half of all women go to work only every other day, the number of women qualifying for higher positions in line with traditional notions of advancement shrinks to 50 percent. This fosters the male-held perception that there simply aren’t enough women with leadership qualities at their disposal. “Lean in!” was the call to arms sent out to women across the globe in 2016 by Facebook COO Sheryl Sandberg. It appears that few in Germany took notice.

Germany’s most beloved employer, the software company SAP, recently devised and implemented an innovative plan to counter the phenomenon of part-time work. For some time now, every management position at SAP has been advertised as a part-time job. Women and men are invited to apply for the position without having to specify in advance whether they want to work full-time or part-time.

Two insights inform this approach: The first is the fact that physical presence is not the most important factor for success, but rather one’s ability to prioritize and, most of all, to delegate. The second is that SAP is increasingly eliminating the stigma of part-time work, which has until recently been seen as a half-hearted commitment to the company and thus an obstacle to a successful career.

There is no mistaking that companies taking this approach justifiably hold the utilitarian hope of being able to meet women halfway with regard to their life plans while at the same time continuing to involve them in the company. Given the growing labor shortage – of skilled workers, in particular – no company can afford to forego women professionals.

To this day, however, gender continues to determine an individual’s chances for advancement in Germany, more so than in most other post-industrial, knowledge-based economies. A man will almost always be considered more qualified for a leadership position at a business or cultural enterprise simply by virtue of being male. 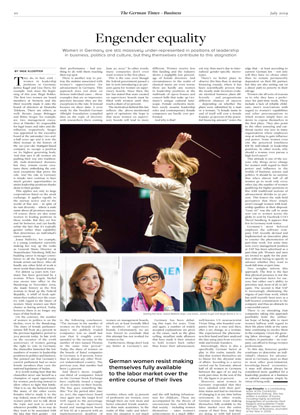