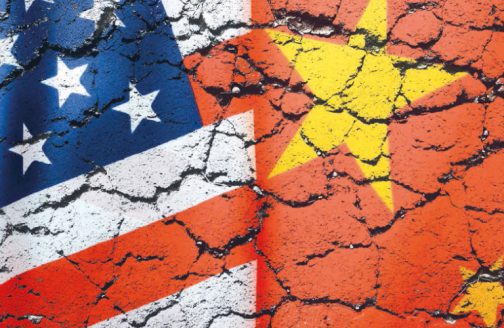 Poverty and hunger are perennial threats to any political system. They are also the factors that in the 1970s prompted China’s Deng Xiaoping to seek a simple and effective way to restore his underdeveloped country. “It doesn’t matter whether the cat is black or white,” the former leader noted, “as long as it catches mice.”

In other words, Deng had declared that communism would henceforth be permitted to engage in capitalist maneuvers, but only if they served to foster the growth of the nation. China thus became the first “workbench of the world,” a highly sought-after production site for products and goods of all kinds.

Today, Deng’s cat and the spoils of its decades-long mouse hunt have become so large that they are prompting entirely different and much more fundamental questions on the world stage. Indeed, although the Middle Kingdom is still officially seen by many as a “developing country,” it is nevertheless well on its way to challenging America’s role as the sole global economic superpower. This attack is paradoxically aimed at the very country that for decades cast itself as the “super power” of all continents, a role that included playing the part of the “world’s police” and ensuring its version of peace, order and democracy.

The People’s Republic of China, however, is to Pax Americana what a slide is to a negative. In other words, Beijing is the alternative that Washington has lacked since the fall of the Iron Curtain at the end of the 1980s. It all makes things rather sensitive, and complicated.

The ruling Communist Party blends a planned economy with a market economy in a thoroughly profitable way. The Western model of an “individualistic market economy” has lost its monopoly on efficiency. We are now being forced to pose the “system question.”

In this context, the huge US trade deficit, in particular with regard to China, foreshadows a much greater power shift. The fact that a nation like the United States continually imports many more goods than it exports undermines its economic strength as a country, even though it can “easily” afford such deficits thanks to lines of credit from all over the world.

As Trump noted, two-way trade has “been too one-sided for too many years, for too many decades.” The last time the overall US trade balance with all countries was almost equalized was as recently as 20 years ago. In terms of trade in goods with the US, the EU has about a €175 billion surplus. The trade deficit with China amounted to $375 billion in 2017.

Raw financial figures are one thing; political aspirations are another. Whenever speculations about a trade war make their way into the public discourse, the real issue at hand is much more than just the amount of money involved. Indeed, what is being discussed is nothing less than who is going to dominate the world. We are being pre­sented with a possible new world order as well as a number of new geostrategic relations. In circumstances such as these, the economy becomes the arena of a spectacular battle between an old world power and an up-and-coming contender: the former continues its full commitment to its “pursuit of happiness,” whereas its challenger operates somewhere between verve and caution, boasting the largest domestic market in the world – 1.4 billion people – and thus facing the rather large problem of facilitating the wealth of its citizens while simultaneously maintaining the invulnerability of its own system.

Donald Trump’s “America first” is simultaneously a “Beat China” approach. In the same vein, his “Make America great again” is just as much a “Make China weak again.” For the Trump administration, this “strategic competitor” with its “predatory economics” – as US Secretary of Defense James Mattis referred to China this year – fulfills a similar “favorite enemy” role that Senator Joseph McCarthy once assigned to Soviet communism in the 1950s.

What most alarms US strategists is “Made in China 2025,” the short-term objective formulated by the Beijing leadership more than three years ago to become the world leader in ten future sectors of the economy. These sectors include electromobility, aerospace, high-speed trains and mobile communications, areas where Shenzhen-based Huawei is already a global player. While Chinese corporations like Alib­aba, Tencent, Baidu and JD.com have long since dominated the internet in their strong domes­tic market, their global expansion plans are now rivaling the corporate world’s beloved “Big Five” on the American stock market, Apple, Amazon, Google, Facebook and Microsoft, whose success is reflected not in the trade balance but in the services account.

In the financial sector as well, China’s four major banks (the largest in the world and also controlled by the state), which operate in conjunction with two large state wealth funds (CIC, Safe), are coming up against a phalanx consisting of Wall Street and asset management giants such as BlackRock and Vanguard, whose voluminous capital holdings have positioned themselves over the world economy like a net.

In today’s era of ubiquitous Trumpism, such market-share issues between competitors inevitably turn into questions of economic warfare. In fact, America’s protectionist policies give rise to the very thing the Chinese are being accused of engaging in, namely a zero-sum game. This implies a world economy in which the gains of one side are the losses of the other, and in which the old aphorism of globalization as a “rising tide that lifts all boats” no longer applies. This was the motto that successfully shepherded countless US companies and investors through the wild years of globalization and helped them ride out the largest economic crisis in history.

Nevertheless, a further escalation of the trade war would be tantamount to self-harm. Today, the economies of the US and China are simply too intertwined. Global value creation and supply chains are just too closely linked. For example, without the cheap mass labor of the supplier Foxconn, the tremendous profits made by Apple with their bestselling iPhone would have been unthinkable. In turn, the relatively comfortable US debt would be inconceivable without their faithful creditor, China, which now holds $1.2 trillion in US government bonds, thus making it America’s largest lender. China, too, is heavily in debt and has a dangerously extensive system of shadow banks.

In a set-up like this, one can afford to gamble a bit, but one should be wary of overdoing it. For this precise reason, Trump’s hope of being able to extort concessions in the chaos he creates may quickly vanish. His goals are free market access, better protection of intellectual property, containment of state influence and less bureaucracy in China. These concerns happen to be shared by all Western companies that do business in the People’s Republic and who generally make big profits. To these businesses, President Xi Jinxing’s comment about China “keeping its doors wide open” represents an effort to achieve harmony via PR. From a Western perspective, these doors are anything but “wide open.”

Europe finds itself caught in limbo between the two power blocs of West and Far East. And, as a confederation of states, it continues to struggle with common policy agreements concerning important issues. What’s missing in Europe is a forward-thinking structural policy; there are also no large internet companies that could carry such a policy into the new era. Europe can’t figure out which is worse, American private-equity capitalists (“locusts”) or Chinese investors. In thinking that both sides are taking aim at its crown jewel – its social market economy – Europe is jeopardizing German medium-size companies that already suffer enough from their own succession problems. This then becomes an open window for investors.

There is a great danger that Europeans will be forced to continue watching the political ping pong match between Trump and Xi Jinping in their usual mixture of amusement and fear, only to end up realizing that the two sides are actually doing business at Europe’s expense. The “American challenge” described 50 years ago by Jean-Jacques Servan-Schreiber has now morphed into the “China question.”

The efforts of Deng Xiaoping – that great Chinese reformer – continue to echo in our current troubled era, much to the dismay of Trump and other defenders of the old world order. In response to the question of what a government should do for its citizens, the “grand old man” of China answered rather succinctly: “Let them get rich!” And then: “Educate them!” From this, we can surmise that Deng’s cat is not going to stop chasing mice any time soon.

Hans-Jürgen Jakobs
is senior editor of the business newspaper Handelsblatt. 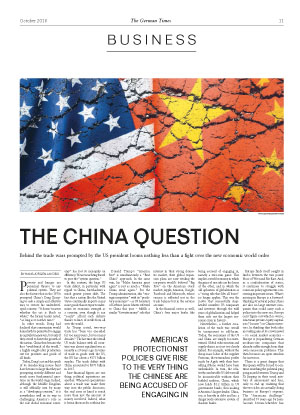