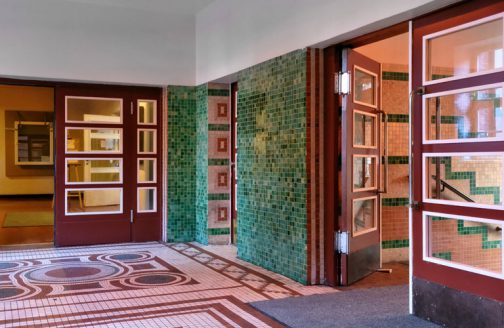 The Sophie Gips Höfe is an incomparable ensemble of carefully refurbished fin-de-siècle brickworks, Biedermeier-style buildings, contemporary architecture, traditional ways of life and modern art. In the mid-1990s, art collectors Erika and Rolf Hoffmann renovated a brick complex – once home to a sewing-machine factory, a bike-chain factory and other trades – and transformed it into lofts. Now, every Saturday, on the fourth floor, they invite visitors to view part of their comprehensive collection in their private rooms. Each year in July, their collection – which includes art by Frank Stella, Bruce Nauman, Richard Serra, Mike Kelly, Lucio Fontana as well as contemporaries such as Thomas Ruff, Wolfgang Tillmans, Pipilotti Rist, Julian Rosefeldt, Yael Bartana, Monica Bonvicini, Ernesto Neto and Katharina Grosse – is shuffled and presented in a different order. A very intimate art experience.

My absolute favorite spot is one of the most beautiful courtyards in Mitte, where the KW Institute for Contemporary Art and its adjacent Café Bravo perfectly combine art with coffee culture. Itself a work of art, the glass-cube café designed by artist Dan Graham in the courtyard of the former margarine factory is surrounded by international exhibitions and is home to the Berlin Biennale for Contemporary Art. The founder of the KW and the Biennale is Klaus Biesenbach, director of L.A.’s Museum of Contemporary Art (MOCA), a former head of PS1 in New York and chief curator at large at MoMA.

Art and cuisine come together here in a building that once housed a school for Jewish girls. Star chef Dirk Gieselmann now serves French cuisine using regional ingredients amid the functional social realist aesthetic and under large Murano glass chandeliers in the Pauly Saal, which once functioned as the school’s gymnasium. In the former classrooms now known as the Deli, Paul Mogg offers his immensely popular pastrami sandwiches. The building also features an offshoot of the Frieder Burda Museum in Baden-Baden, the Galerie Michael Fuchs and the Rooftop Playground, which is full of sculptures and installations and offers plenty of space for private parties. The Jüdische Mädchenschule was founded in 1835 and took up residence in the building designed by Alexander Beer (1873-1944) on Linienstraße in 1930. In 1942, the Nazis closed the school as part of their plan to exterminate the Jewish people. Reopened in 1950, the school closed again in 1996 due to a lack of students. The building now belongs to Berlin’s Jewish community.

This used to be where newspapers were written, set and printed, but now the complex owned by Der Tagesspiegel is home to galleries like Esther Schipper, Blain|Southern and Galerie Judin as well as to Andreas Murkudis’ stunning concept store. Anyone who walks into his store feels like they’ve entered a massive gallery filled with objects whose prices will in many cases blow your mind, whether it’s clothing, eyewear, bags shoes, jewelry, furniture or accessories. Too much luxury? Murkudis sees it differently. “My goal is to astonish my customers as soon as they walk through the door.”

For years, this ballroom has been the perfect spot for people who like to dance – and flirt. But its days are numbered, as the century-old building will soon be renovated but hopefully retain its 1920s charm. Among its loveliest spaces are the cozy restaurant and the hall of mirrors on the first floor. Whether frustrated hipsters or taxi drivers from abroad, young and old converge at Clärchens for a night of dancing with friends, weekend disco nights or classes in Salsa, Swing, Tango or the Waltz. As was true in the 1920s, couples at closing time simply take their canoodling to the stoops of neighboring buildings.

Located between Auguststraße, Rosenthaler Straße and Torstraße in a building housing star architect David Chipperfield’s Berlin office, the two-story Kantine provides delicious daily meals to his staff. Anyone who lives or works in the neighborhood is welcome to drop by for a bite, and there’s also a courtyard dining area for the warmer months. The minimal interior design of the cube-shaped building features exposed concrete, wood and marble. David Chipperfield Architects designed the building themselves, while its interior, furnishings and even the china and cutlery were conceived by the Brit and his team.

You won’t see any tourists at Silent Green, a secluded cultural center in Wedding. You’re more likely to meet artists and locals in this enchanted garden bordering a cemetery. The Mars Café serves light, modern food – but only until 6pm! In 2013, 100 creatives took over this 6,000-m2 former crematorium. SAVVY Contemporary, Musicboard Berlin, the Harun Farocki Institute and the Arsenal film archives are a few of the tenants. Art historian Jutta von Zitzewitz has published a book on Silent Green in which we learn that cremation was frowned upon under the Kaisers, but later prevailed as a progressive and hygienic alternative to burial. The Nazis designated cremation an ancient Germanic custom and turned the space into a place of worship, but it’s now back in the hands of the community. Thank god.

08/10_ FROM OLD BREWERY TO CONTEMPORARY ART

This industrial monument in a 1920s brick expressionist-style brewery recently got a new lease on life. This collection of engine house, brew house, tower and boiler house is no longer churning out beer; since 2016, the KINDL – Center for Contemporary Art has been exhibiting contemporary international art on a spread of more than 1,600 square meters. There are several large exhibitions each year here at the former brewery complex in Neukölln. Events such as artist talks, lectures and concerts round out the program. The brew house is a visual reminder of the building’s former use, and visitors to the café can sip their cappuccino among six huge, shiny copper kettles.

The wonderful collection at Piano Salon Christophori includes a grand piano crafted by Ignaz Pleyel (1757–1831) and an almost entirely preserved 1825 artisan grand piano by Nanette Streicher (1769–1833). This salon collects and restores pianos and pianofortes and then presents them at evening concerts. Fantastic musicians and singers, many who perform for Berlin ensembles or orchestras, embrace their duty of reintroducing the pianos in this cozy workshop atmosphere. Audiences are invited to enjoy great conversation and a glass of wine – but no smoking around these old gems. Although the salon is still an insider tip, reservations are recommended.

Mirror, mirror, on the wall, who’s the fairest park of them all? Körnerpark, of course. This small, 2.4-hectare site is a mini version of a grand palace park. Now a listed landmark, the park was set up between 1912 and 1916 in a former gravel pit, hence its low-lying setting. Its adjacent buildings peer down from several meters above, and visitors must descend stairs to reach it. The park gazes proudly back at its neighbors, knowing full well that it’s the reason why the area has become a nucleus for high-scale residential living. The park’s orangery was once home to wintering potted plants and today houses the charming Zitronencafé. Contemporary art exhibitions are organized here as well as in the park itself, with a number of concerts also taking place in summer. The park’s first owner was Franz Körner, who grew and showcased his widely popular giant sunflowers here, and who also exhibited the remains of a mammoth – among other curiosities – in a museum. In 1910, Körner gifted the park to the district of Rixdorf on the condition that the space be named after him. “Why not?” said the city councilors. Soon thereafter, excavators found yet another mammoth molar tooth on site, as well as a grave in which a Hun horseman was buried alongside his horse, with his sword still lying across his body.

Sabine Bärenklau
knows her way around almost all of Berlin’s hidden cultural treasures. She worked for many years at the KW Institute for Contemporary Art and more recently has organized art trips and art-themed walking tours in Berlin and throughout the world. 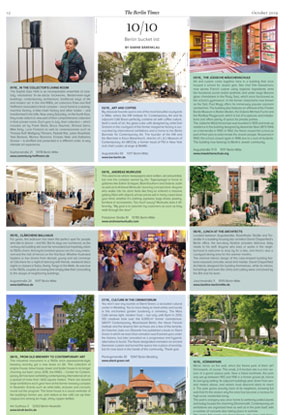