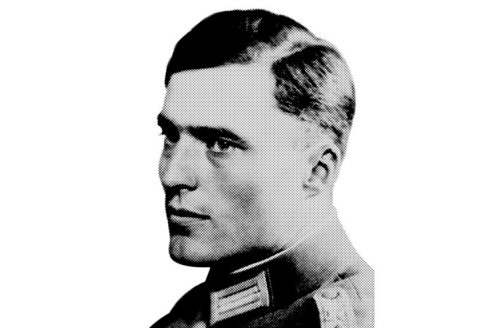 A new biography of Claus von Stauffenberg, the man who tried to kill Hitler, has reignited a long-running historical debate. It says a lot about the German state of mind

At midnight on July 20, 1944, four men are escorted to the inner yard of the Bendlerblock, the headquarters of German Army in Berlin. The glaring headlights of military vehicles cast the scene in a ghostly atmosphere. The firing squad consists of 10 petty officers. They proceed to execute four conspirators, chief among them a high-ranking officer named Claus Schenk Graf von Stauffenberg.

Earlier that day, Stauffenberg had detonated a bomb at the Wolf’s Lair, Adolf Hitler’s Eastern Front military headquarters – a two-hour flight from Berlin. The dictator had survived the assassination attempt thanks to a series of flukes, but primarily because hot temperatures that day caused the venue for the tactical session to be moved from the bunker, where the bomb would have caused considerably more damage, to a lightly built shack nearby.

In the ensuing hours, the conspirators nonetheless went forward with their elaborate plan to overthrow the regime in Berlin, but after the Führer himself called several loyal generals and officers, Stauffenberg and his men were captured and killed. With their deaths, the plot to end the Nazi stranglehold over Germany and most of Europe was all but over. The regime did not end until ten months later, when the Allies captured Berlin and Hitler killed himself in his bunker there. The debate in Germany about the legacy of the men involved in the July 20 plot has been raging on ever since.

In the 1950s, the conspirator’s reputation was discredited among large groups of the population. This occurred among the remaining proponents of Nazi ideology, but more disturbingly also among former functionaries and passive adherents who wanted to discredit the initiative to end the regime, in part because they felt it was an indictment on their complacency between 1933 and 1945. Authorities denied pensions to many of the descendants of the men involved in the plot. There was also no official acknowledgement of the group of July 20.

Critics from the left have their own list of admonishments, including the following: the conspirators were mostly officers who had adhered to Nazi ideology; they did not begin to oppose Hitler until it became increasingly inconceivable that the war they had participated in could be won; they were mostly of aristocratic origin, their values not in line with democratic norms. And, in the leftists’ view, Germany had to be totally defeated by the Allies to ensure that they would not be spared from facing up to all the crimes and atrocities they committed (most of all the attempted extermination of the Jews).

Beginning in the 1970s, however, a new appreciation emerged. The Bundeswehr, looking for moral legitimization, officially adopted the legacy of July 20 as part of its identity – service men should be Staatsbürger in Uniform, citizens in uniform, not slavish adherents to an authoritarian state. The German army traditionally swears in new recruits every year in a big ceremony on July 20.

Now Karlauf has written an erudite and elegant biography, a reexamination of Stauffenberg’s life and the formative influences on his thinking while managing to land squarely in the middle between both of today’s camps. Those who declare the men of July 20 transcendent heroes as well as the left-leaning critics can read into Karlauf’s book precisely want they want to hear.

The author set out to write about Stauffenberg using only sources – documents, letters, memoirs – from before 1945, that is, before the mythmaking began in earnest by both friends and detractors.

Stauffenberg was primarily influenced in his youth by the charismatic spell of the poet and – as he would be deemed today – cult leader Stefan George. George, born in 1868, had gathered around him a group of young men dedicated to poetry and male companionship imbued with at least a hint of homoeroticism. No less radical than Karl Marx, who urged philosophers not only to interpret the world but to be willing to change it, George, albeit with a different world view, spoke of poetry as a revolutionary force with the potential to overthrow existing orders. “George from the beginning considered himself to be a poet of ‘the act,’” Karlauf writes. “Conspiracy and overthrow were central elements of his world view; ‘the act’ became the decisive metaphor of his poetry.”

Karlauf traces Stauffenberg’s slowly evolving thinking from romanticizing about a new Germany in the 1920s, welcoming the Nazi regime in 1933 and approving of the war until realizing that Hitler would amount to nothing but Germany’s ruin.

Like many of his co-conspirators, once Stauffenberg reached this conclusion, he advanced the planning of the assassination and urged his overly cautious and scrupulous fellow officers and civilians to follow suit. By the summer of 1944, he had become so indispensable to Operation Valkyrie, as the plot was called, that after taking it upon himself
to detonate the bomb at Wolf’s Lair, he flew back to Berlin where he was needed to coordinate the plan of arresting the most important Nazi figures such as Heinrich Himmler and Joseph Goebbels.

It is a very distinct point Karlauf is making. Stauffenberg was not the idealist hero his proponents to make him out to be today. His aristocratic upbringing did not imbue him with immunity against the Nazi mob. He did not try to kill Hitler because of Auschwitz, or all the other camps, or the rampant corruption, or the establishment of a police state. He did it because Hitler was losing the war.

Instead, Karlauf credits Stauffenberg with epitomizing Max Weber’s concept of Verantwortungsethik (ethic of responsibility). After Stalingrad, the gruesome defeat of the Sixth Army in Russia during the winter of 1942–1943, Stauffenberg came to the conclusion that the war could not be won and that Hitler did not have the right to take the entire German people down with him. The man had to go. “This kind of reasoned military and political assessment,” Karlauf writes, “does not jibe with our view of July 20 as a beacon of moral outrage.”

Case in point, Sophie von Bechtoldsheim, granddaughter of Stauffenberg, responded with an impassioned critique of Karlauf’s book in a speech in March. “Categories like morals and conscience cannot be located on this side or that side of political party lines,” she wrote, “but only within a person. It should therefore actually be called an uprising of those who followed their conscience.”

Jens Jessen, also a grandchild of a July 20 conspirator, delivered a very critical and extensive review in Die Zeit, but drew some interesting conclusions relevant to the ongoing debate. No earlier biography had brought us so close to Stauffenberg while allowing him to remain the distant figure that he was, Jessen writes. The journalist and descendent reads Karlauf’s biography as an attempt to delegitimize Stauffenberg’s heroics while identifying a common tendency among Germans, the will to allocate blame equally: “There shall not have been heroes.”

What Jessen fails to grasp is that great historical gray area in which all seemingly larger-than-life yet flawed figures exist. What Karlauf makes patently clear in his copious portrait is that Stauffenberg is part of Germany’s history, of both its highs and its lows, and the critical figure in a corresponding debate that cannot and should not be constrained by the affixing of ahistorical slogans. 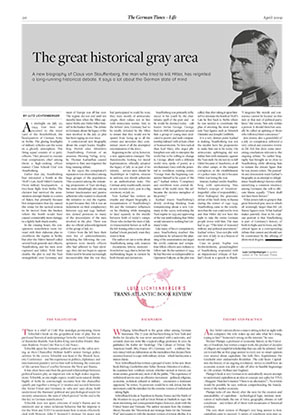