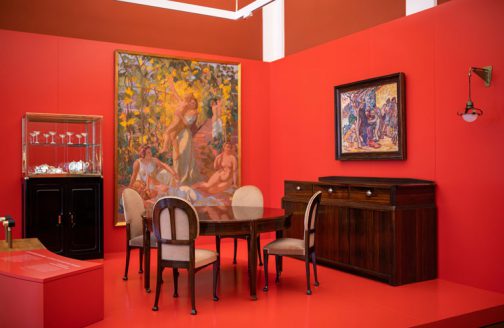 The contemporary being must begin anew, to rejuvenate himself, to achieve a new humanity, a universal lifeform of the people,” wrote architect Walter Gropius emphatically back in 1919. The sentence reveals the brutal disillusionment felt by an entire generation after the horrors of World War I. Their confidence in the blessings of technology had been deeply shaken by the mechanized killing and industrial annihilation of millions of young people.

But what exactly should this “new man” look like? At a new art school known as the Staatliches Bauhaus, founded in Weimar in April 1919, Gropius – the school’s first director – joined with the group of teachers and students he had assembled, all of whom were filled with a sense of new awakening, and set out on a path to explore this “new man” of the future and render him as tangible as possible.

In the early years, the Bauhaus was a virtually unregulated playground of creativity, a boundless laboratory reveling in the joy of experimentation. The school focused on the most holistic view possible of mankind, as well as on the perception of body and movement, colors and forms, materials and contrasts via all human senses. “I am leading all creative activity back to its roots, to play. Those who fail at this in my book fail as artists or students,” argued Johannes Itten, the founder of the preliminary “basic design course” at the Bauhaus, which all students were obliged to take before they could be admitted to one of the workshops.

His colleague Oskar Schlemmer, on the other hand, sought to find universally valid “human types” in which individual features were reduced and emphasis was placed on characteristic forms. Yet another approach was taken by Wassily Kandinsky, who searched for new harmonies between man, nature and technology by means of radical abstraction and color analysis.

Today, the exciting atmosphere and zest for life in this wild and unbridled phase of the legendary school is on display in a highly accessible form at the recently opened Bauhaus Museum in Weimar. The new building was designed by architect Heike Hanada and sets a new and distinctive tone in this city of Goethe and Schiller. Most importantly, it helps visitors understand and reinterpret the connections between German Classicism in the period around 1800 and the advent of Modernism more than one hundred years later.

The highs and lows of German cultural history collide in Weimar like in no other German city. Only minutes away from the central square, which saw the creation and presentation of great Classical literature, the gathering of the national assembly of the first German republic and the laying of the foundation of modern design and architecture at the Bauhaus, the Nazis murdered tens of thousands of people at Buchenwald concentration camp. Today, the bulky yet delicate concrete cube of the new Bauhaus Museum is an effective and eye-catching contrast to the former Gauforum, the monstrous remnant of a city planned by the Nazis.

The Bauhaus school brought art and craftsmanship together to form a hitherto unknown symbiosis, and the fact that it was even able to develop into such a visionary institution was largely due to the efforts of Walter Gropius. Although the first Bauhaus director on many occasions drew on the preparatory work of his colleagues for his own designs, and although he himself was never considered an architectural genius, he was nonetheless a highly gifted communicator and a tireless fighter for the Bauhaus idea.

It was Gropius who brought well-known artists such as Lyonel Feininger, Gerhard Marcks and Paul Klee to the Bauhaus alongside Itten, Schlemmer and Kandinsky, even though he knew full well that a gathering of creative egos in a small space was bound to lead to artistic friction. It was also Gropius who from the very beginning defended the design school against bitter opposition from the political and social realm – from the left, but above all from the right.

After the school’s initial phase of discovery, which focused on finding answers to questions relating to the “new man,” a second issue came to occupy the minds of the Bauhaus teachers and students: How do we want to live in the future? It was clear that it wasn’t possible to stop or turn back the ongoing march of technology. What then arose was the idea of merging technology and art to form a fruitful unity. Running water, as well as gas and electricity delivered directly to homes, were that era’s promises for increased comfort and a new way of living. The task then became to make everyday life easier and more beautiful by taking full advantage of modern materials and functional design.

In 1923, the Haus am Horn – the only residential building built in Weimar according to Bauhaus principles – hosted the first exhibition of designs from the school’s workshops. Many of those objects and pieces of furniture served to furnish exemplary living rooms and children’s nurseries or kitchens, and they now tell the story of the arrival of design into everyday life at the new Bauhaus Museum.

Throughout the Weimar era of the Bauhaus, the Bühnenwerkstatt, or “stage workshop,” remained the school’s creative center, the place where light and movement, color and body were explored in a playful manner. Oskar Schlemmer’s “Triadic Ballet” became the epitome of artistic performance – one in which human-machine figures performed the dance of the future. The merging of the “new man” with technical and artistic attributes symbolized the school’s gradual rapprochement with industrial working methods and serial production. After its politically motivated expulsion – a right-leaning party had reduced the Bauhaus budget by 50 percent – from Weimar in 1925 to a new location in Dessau, it was precisely this change in perspective that made it possible for the Bauhaus to become the highly influential design institution it continues to be to this day, all over the world.

But that’s another story – one that will be told in Dessau starting in September, when a second new museum examining the history of the Bauhaus will open to celebrate the school’s 100th anniversary. 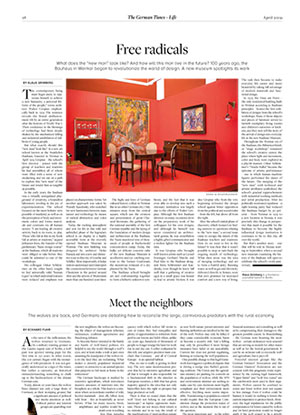