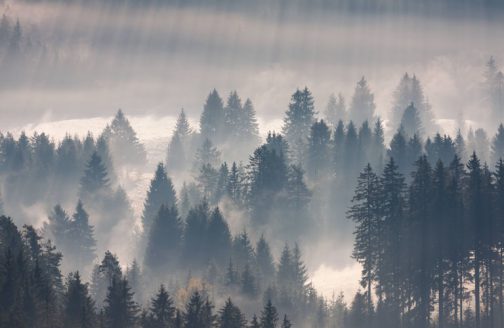 Hardly any other German myth has been cited and celebrated as consistently as that of the German forest. In Jacob Grimm’s 1835 publication Deutsche Mythologie (Teutonic Mythology), the author singled out the forest as the specific primordial site of popular belief and Germanic pagan ritual. That the myth of the forest has held firm through the irrevocable dissolution of most German myths during the apocalypse that was the Third Reich can perhaps be credited to the fact that this myth is not necessarily linked to a particular ideologically laden or politically charged location. Even National Socialism, for which the Ewiger Wald (Enchanted Forest, and the title of a 1936 propaganda film) – along with Blut und Boden (blood and soil) – served as a critical bulwark of ideology as well as an inspiration for formal forest policy and enacted legislation, could not gravely injure this myth.

Almost two millennia hence, Tacitus described Germania as a land permeated by dark forests, and cited the victory by Arminius in the Teutoburg Forest as at least partly due to the murkiness of the woodlands, where the native Teutons slew the Roman troops that were accustomed to open battle fields. The cult of the Hermannsschlacht – another term for the decisive battle – became the foundational myth of national identity in the 19th century, and in this context it was in particular the “German oak” that would develop into one of the essential symbols of this identity and of Germany’s heroic national strength. The German forest versus the French city – no matter how one may assess the consequences of this dichotomy, it represents a cultural opposition that has defined civilization theory and polemics since the early 19th century.

For Germans, the forest poses nothing short of a landscape of longing, the epitome of protective nature – a fact frequently met with astonishment by non-Germans. A sizable ideological dispute over its preservation and proper use continues to this day, as it receives a constant supply of oxygen from a vigorous environmental movement. The most recent demonstrations in defense of the Hambach Forest are a classic example. Commemorating the dead and the work of mourning often converge in the weighty symbolism surrounding forests – as attested by forest cemeteries and tree burials – while environment pedagogy tends to seek out woodlands, and includes institutions such as forest kindergartens. Since the mid-1970s, forest dieback – often the result of acid rain, which in recent decades has been vigorously deplored and successfully combatted – has been referred to all across Europe by the German word for the blight: Waldsterben.

Forest consciousness in Germany is a phenomenon that has spanned all generations, social classes as well as ideological and political leanings since the Romantic period, during which painting, poetry and literature, as well as the fairy tales and legends they helped revitalize, carved out a central symbolic role for the forest. One fruit of this phenomenon has been the birth and sustenance of a constant that has pervaded and still pervades German culture – an astonishing fact considering the colossal upheavals in recent German history and the collapse of conventional patterns of identification during and after World War II.

Despite the ideological abuse of the German forest under the Kaiser, followed by a new wave of chauvinist forest propaganda – including the organization, under the patronage of Field Marshal Paul von Hindenburg, called Deutscher Wald e.V., Bund zur Wehr und Weihe des Waldes (German Forest Association for the Defense and Consecration of the Forest) – Reichstag parties ranging from the Social Democrats to the far right acted in 1924 on the proposal by Reich President Friedrich Ebert to erect a (never realized) “national memorial” for the fallen soldiers of World War I in a forest, the “primordial origin” and “power source” of the Germans. This was only possible because this memorial was to be built in a forest – preferably at Bad Berka – and not at an historical location, where political semantics would surely have provoked much dispute. One could almost recite, in a variation of the line in the 1914 declaration of war by Kaiser Wilhelm II: I henceforth see no political parties, I see only the German forest!

In his theoretical magnum opus, Crowds and Power (1960), Elias Canetti compared the role of forest romanticism for the Germans with that for the army:
The crowd symbol of the Germans was the army. But the army was more than just the army; it was the marching forest. In no other modern country has the forest-feeling remained as alive as it has in Germany. The parallel rigidity of the upright trees and their density and number fill the heart of the German with a deep and mysterious delight. To this day he loves to go deep into the forest where his forefathers lived; he feels at one with the trees.

Without a doubt, one of the foremost forest romantics was Joseph von Eichendorff (1788-1857). His poetry presents the forest as a religious landscape – an “andächtger Aufenthalt” (pious dwelling) for the soul with its meditative resonant spatiality in contrast to the “geschäftge Welt” (wild world) of the city, as made famous by Mendelssohn’s musical rendering of the poet’s Abschied: “O Täler weit, o Höhen” – as well as, of course, a patriotic one. A classic example is von Eichendorff’s poem Der Jäger Abschied (Hunters’ Farewell), in which the religious and meditative components harmonize with the patriotic. In the third and fourth stanzas, the forest, as conjured by the Brothers Grimm, is the primordial sphere of the legend and the loyalty expressed within it – that is, German loyalty. This must also manifest itself in active life, in the context of the Wars of Liberation, and thus on the battle field. In this light, the forest becomes a “deutsch Panier,” or German banner.

The forest is also the chief setting for Carl Maria von Weber’s Der Freischütz (The Marksman), the – at least at one time – German national opera. The forest appears at once, in the tradition of Tacitus, as a locus terribili and as a site of redemption. The nation’s interpretation of Der Freischütz is above all as a musical representation of the German forest. Clear evidence of such is a remark by Hans Pfitzner, at the outbreak of the World War I: “The main character in Der Freischütz is, so to speak, the forest, the German forest glittering in the sun [….] Weber’s mission was nationalistic – its objective was freedom and international recognition for German culture.”

Since Der Freischütz, the forest has become ever more the symbolically superelevated venue for opera – Wagner’s Siegfried (with the “Forest Weaving” arrangement in the second act), his Parsifal and Humperdinck’s Hänsel und Gretel and Die Königskinder, just to name a few. Even after the Romantic period, “forest romanticism” lived on in the narrative literature of the 19th century and was superseded by a poetic and realistic depiction of the forest (e.g. Adalbert Stifter’s transformation of the forest between his poems Hochwald (1841) to Waldgänger (1847)). And indeed, in the 20th century it experienced an unparalleled boom among writers of light fiction and sentimental films. The most significant attempt to imbue the German forest once again with a symbolic glow is Stefan Moses’ series of photographic portraits titled Menschen im Wald (People in the forest), which sought to use the background of the forest to shift the emigrants and great forbearers of German culture into the back light of a different authenticity. Once again – and surely not for the last time – the forest appears there as a “German banner.”

The world below sends tangled sounds,
Lonely deer are grazing above.
And we go off and blow our horns,
And it echoes a thousandfold:
Farewell,
Farewell, you beautiful forest!

Banner, so cool aflutter!
Under your undulations of green,
How you us faithfully sheltered,
Keeper of pious legends!
Farewell,
Farewell, you beautiful forest!

What we lent quiet praise in the forest
We preserve afield with honor,
Our fathers remain in ever faith:
German banner, waving, rustling,
Farewell,
May God protect you, beautiful forest!

Dieter Borchmeyer
is Professor Emeritus of Modern German Literature at the University of Heidelberg. From 2004 to 2013, Borchmeyer was president of the Bavarian Academy of Fine Arts. In 2017 he published his 1,000-page study Was ist deutsch? Die Suche einer Nation nach sich selbst (What is German? A nation’s search for itself). 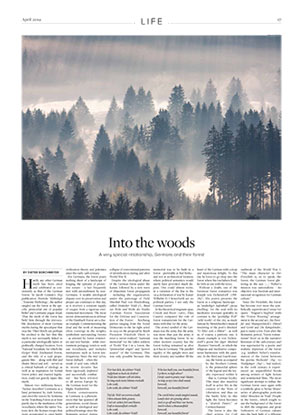