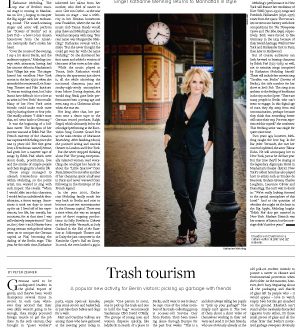 I love New York,” gushes Katharine Mehrling. The top star of Berlin’s musical stage is coming to Manhattan on Oct. 5, hoping to conquer the Big Apple with her enchanting sound. The award-winning singer and actor will perform her “Streets of Berlin” act at Joe’s Pub – a bow to her chosen hometown from the American metropolis that’s stolen her heart.

“Over the course of the evening, I say a lot about Berlin, and the audience enjoys it,” Mehrling conveys with assurance, having had her concert debut in Manhattan’s East Village last year. The singer honed her excellent New York accent in the late 1990s when she attended the renowned Lee Strasberg Theatre and Film Institute. “It was an exciting time, but I also learnt how difficult it is to live as an artist in New York,” she recalls. Many of her New York artist friends could make ends meet only by having three or four jobs. She readily admits: “I didn’t want that, so I went back to Germany.”

It was the beginning of a brilliant career. The linchpin of her success was and is Edith Piaf. The French mistress of the chanson has captivated Mehrling since she was 19 years old. Her first great love, a Frenchman named Jerome, had given her a cassette tape of songs by Edith Piaf, which were about death, prostitution, love and the stories of simple people and their longing for a better life.

These songs managed to unleash tremendous emotion within Mehrling, so the petite artist, too, wanted to sing with such impact. She recalls: “When I would slide into this character, I would feel an unbelievable identification, a fierce energy. Sometimes it took me days to come up for air. I lived off of her experiences, her life, her travails, her successes, for at that time I was still relatively inexperienced.” And so, the 5-foot-1-inch Hessen-born young woman with gobs of talent went on to conquer the German capital as Piaf, becoming the darling of the Berlin stage. This year, for the sixth time, Katharine Mehrling has received the “Goldene Vorhang” (Golden curtain), the audience award for Berlin’s most beloved stage actress.

There’s no question that she inherited her talent from her mother, who died of cancer in 2001. Grit von Osthe – as she was known on stage – was a celebrity in her Hessian hometown near Frankfurt, where she ran the music club Tenne. Bands would play there and Mehrling’s mother would accompany with song. “Her real name was Margarethe Mehrling,” Katharine reveals with a smile. “But she never thought she could get very far with the name Mehrling.” So she shortened her first name and added a version of the name of her town as her alias.

While the music played at Tenne, little Katharine would sleep in the apartment just above it, all the while absorbing the nocturnal chansons, jazz and smoky-nigh-seedy atmosphere from below. During daytime, she would sing Heidi, gave little performances from a young age and even sang on a Christmas album when she was ten.

Not long after that, her parents sent a demo tape to the German record producer, Ralph Siegel, which ultimately led to the schoolgirl performing at the Eurovision Song Contest Grand Prix as the mini-version of Marianne Rosenberg. After finishing school, she pursued acting and musical theater in London and New York.

But she never stopped thinking about Piaf. The young, exceptionally talented woman read everything she could get her hands on about the “Little Sparrow” from Paris, listened to one after another of her chansons, spent a half-year in Paris and never wavered from following in the footsteps of the French legend.

In the year 2000, Katharine Mehrling finally made her way back to Berlin and rose to become must-see entertainment in the German capital. There was a time when she was an integral part of three ongoing productions: As Sally Bowles in Cabaret at the Bar jeder Vernunft, as Judy Garland in the End of the Rainbow at Schlosspark Theater and as Daisy the jazz composer in the Komische Oper’s Ball im Savoy. In 2008, she even landed a gig in the Tom Cruise feature Valkyrie; Mehrling played a singer at the officers’ club and can be heard on the soundtrack singing “Fur eine Nacht voller Seligkeit.”

Mehrling’s performance in New York will feature her renditions of Kurt Weill (1900–1950) songs and Friedrich Hollaender (1896–1976) tunes from the 1920s. The two artists wrote music history with their compositions for The Threepenny Opera and The Blue Angel, respectively. Both were forced to flee Germany in the 1933 because of their Jewish heritage, Weill to New York and Hollaender first to Paris, then later to Hollywood.

But of course, audiences can look forward to hearing chansons by Edith Piaf (1915–1963) as well, not to mention songs composed by Katharine Mehrling herself. These will include her newest song “Strassen von Berlin” (Streets of Berlin), the title number for her show at Joe’s Pub. The song is an anthem to the feeling of loneliness in the city on the Spree. “There are many people in Berlin who can’t seem to engage. In this digital age of ours, they shy away from real communication, perhaps because they think that something better will come their way. I’ve even experienced this myself,” she confesses. This fetching artist was single for quite some time.

Two years ago, however, Mehrling caught the love bug. In the Bar jeder Vernunft, she met her current boyfriend, the actor Tilmar Kuhn. He will accompany her to New York, just as he did last year. But this time they’ll be staying at the legendary Algonquin Hotel in Manhattan’s theater district. New York’s oldest hotel has also played host to artists such as Simone de Beauvoir, Graham Greene, Charles Laughton, Laurence Olivier and Diana Rigg. She can’t wait to check in: “We’re really looking forward to the special atmosphere of this hotel.” And to the question of whether she might tie the knot in the Big Apple, Mehrling laughs: “Edith Piaf also got married in New York. Marlene Dietrich was her matron of honor, but the marriage didn’t last five years.” 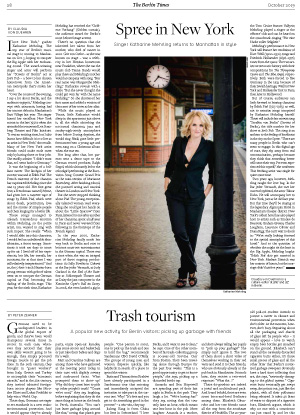