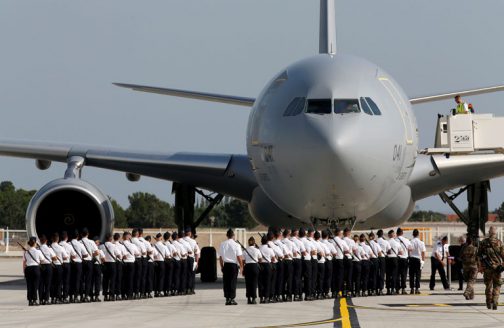 It was 2006, and Columbus, Mississippi, was where it was all supposed to get started. EADS co-CEO Tom Enders himself came to open a new helicopter assembly plant. His company had just won a contract to build several hundred aircraft for the US Army. The UH-72A Lakota, the military version of the EC145, was supposed to serve in a variety of roles – executive transport, search and rescue as well as troop deployment, where feasible.

Most importantly, EADS (now Airbus) hoped the contract would mark a watershed moment for its business in the United States. Its market share in civil air transport was well below the world average, as US airline fleets continued to be dominated by Boeing. And the European manufacturer was barely present in the world’s largest defense market. Things could only improve.

Thirteen years later, as Enders prepares to retire as Airbus CEO, results are mixed. The Lakotas continue to be built in Columbus, but only at about half the peak rate achieved in 2011. The backlog of orders is enough to keep the production line busy for another two years or so, but then new business will be needed.

In addition to the Lakota, Airbus had hoped to be engaged in building aerial refueling tankers for the US Air Force. The company invested in an engineering center in Mobile, Alabama, and prepared for Airbus A330-based tankers to be built at the site as it bid for a large contract in 2008.

A look at Mobile today reveals the harsh business realities. There is no sign of A330s at Brookley Field Airport. After having initially won the tanker contest, Boeing protested, and after some extended back-and-forth, the US manufacturer is now building the KC-46 tankers for the US military. Airbus dominates the non-US tanker market with the A330 MRTT (multi-role tanker transport), but the world’s (by far) largest air force continues to fly Boeing aircraft exclusively.

However, Mobile is also a symbol of success. Earlier this year, Airbus broke ground for a large new hangar to be used for final assembly of the A220. Formerly known as the Bombardier C Series, Airbus took majority control of the 100-to-150-seat aircraft in 2018.

Boeing tried to persuade the US government to impose import tariffs on the aircraft, arguing it benefited from massive Canadian government support, which prompted the decision by Airbus to move A220 assembly inside the US and supply US airlines from the Mobile facility. Airbus went ahead with the investment anyway, and the Boeing initiative ultimately failed. The first locally built A220 is to be delivered in 2020, and capacity will eventually ramp up to four aircraft per month.

The A220 program, long overshadowed by doubts about its true market potential, could become an important – and perhaps the most important – driver of Airbus’ growth in the US market. Delta Air Lines has already received delivery of its first four A220s and began using them as part of their fleet in early February. Delta’s first scheduled A220 flight took off from New York-La Guardia and landed at Boston-Logan. The airline has ordered an additional 86 A220s to replace part of its aging narrow-body fleet. Next in line is JetBlue, which bought 60 A220-300s to replace the Embraer 190. Moreover, airline investor David Neeleman, who founded JetBlue among other carriers, is using another 60 A220s to start up a new US-based airline, preliminarily called Moxy.

The A220 facility complements an existing production site for the larger A320 family. Airbus opened the final assembly line in late 2015 and delivered the first aircraft to JetBlue Airways in April 2016. Mobile has delivered four A320 family jets per month since late 2017. According to Airbus Americas Chairman and CEO Jeff Knittel, further growth is just around the corner.

With all the major orders being filled in Mobile, Airbus is now facing the challenge of filling capacity at the original Bombardier site it took over last year at Montréal–Mirabel International Airport. Workers there are increasingly concerned that the center of gravity is shifting too far south to the bulk of the market – despite Air Canada’s large order of 45 A220s.

Enders has tried to alleviate these concerns by saying Canada is now considered to be Airbus’ fifth home country, in addition to Germany, France, the UK and Spain. Involvement in the sector is to include cooperation with local aerospace suppliers and universities. But it will be a long process, the success of which will hinge on the ability of Airbus to implement a financial turn-around of the A220 program.

Bombardier was unable to succeed, in part because suppliers were able to use the perceived risk in what had earlier looked to be a marginal program to secure highly profitable deals. Airbus has only just begun talks to alter the unfavorable contracts; the extent to which it can drive down costs is still unclear.

Over in the US, Airbus managers hope for another chance with the military. The US Air Force is pondering how to meet the demands of the new US National Defense Strategy, which foresees the addition of at least 14 tanker squadrons by 2030. A squadron typically comprises at least 12 tankers, which means 168 new aircraft would be required over the next 11 years, none of which are covered by any existing contracts.

Consequently, Airbus announced in December that it teamed up with Lockheed Martin “to examine a broad spectrum of opportunities.” Most importantly for the short term, Airbus could deliver the A330 MRTT while Lockheed contributed its system integration skills and lobbying clout in Washington, D.C., in another round of the US tanker competition. “Lockheed would have been our favorite partner ten years ago,” Enders said. “And I don’t understand why the world’s largest air force still does not fly the world’s most capable tanker.”

It will likely take years before more clarity can be reached on a potentially massive order. But once it is there, and the Airbus-Lockheed venture prevails in part or in full, it is likely to be the Mobile site at Brookley Field that again will benefit. Airbus has ensured that there is enough land available for it to build another hangar for work on the A330. Just in case.