An obituary for US Senator Richard Lugar 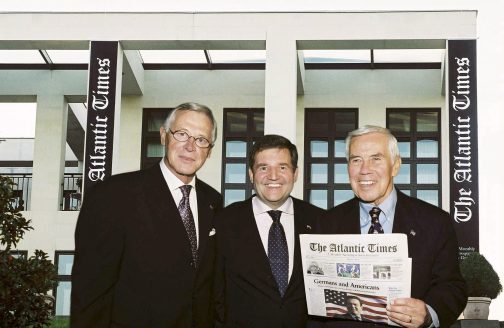 Trans-Atlantic relations have suffered a number of heavy blows in recent times. The latest loss is a sad one indeed: The death of US Senator Richard Lugar leaves us mourning the loss of a great statesman, a loyal friend to Germany and campaigner for a free world. Alongside Senator John McCain and former President George H.W. Bush, Lugar counts as one of the great trans-Atlantic figures of our time.

Richard Lugar was one of the United States’ most accomplished foreign policy experts, a man for whom his homeland’s commitment to a freer, more open, more democratic world and the power of the trans-Atlantic alliance were not just empty words but actual deeds. Tireless in his efforts to build bridges, to foster and intensify trans-Atlantic relations, and to make the world a better place, Lugar always saw Germany as one of the United States’ most important allies and emphasized the importance of the relationship between the two countries, viewing it as a partnership of equals. Above all, his great and longstanding commitment to promoting and supporting the newspapers The German Times and The Atlantic Times as a journalistic bridge between the two nations will never be forgotten. We owe him a great debt of gratitude. The importance of trans-Atlantic dialogue in our current era is thrown into sharp relief by the social and political challenges we face today, challenges that call for mutual fact-based understanding and trust on both sides of the Atlantic. Without Richard Lugar, trans-Atlantic relations would be less articulate and more remote from the societies they affect.

Similarly, nuclear disarmament and the securing of nuclear weapons was a personal concern for him, one with which he, alongside Democratic Senator Sam Nunn, made the northern hemisphere a little safer after the end of the Cold War. The Nunn-Lugar Initiative, which began in 1991, destroyed thousands of nuclear warheads and hundreds of intercontinental missiles as well as numerous biological and chemical weapons in the countries of the former Soviet Union. Long before the danger of “stray” nuclear weapons in the hands of terrorists came into the general consciousness, Lugar made the securing of weapons of mass destruction his political mission in life. It is a mission that we want and need to continue in the spirit of Richard Lugar in order to put a stop to the new trend of nuclear saber-rattling.

At a time when global peace is threatened once more and a new political generation is negligent with the historical legacy of its predecessors, we will very much miss the spirit of Lugar—his decency, his farsightedness, and his pragmatism, shaped by the mutual courage and trust of the political protagonists of the time. Nevertheless, we will go on and all the more resolutely defend what Richard Lugar stood for against the rise of global illiberal forces. What is at stake is our freedom and the peace and stability of our world, the only world we have. We will continue to take a stand for it. R.I.P Senator Richard Lugar.

Detlef Prinz is the publisher of The German Times formerly The Atlantic Times.

Picture: 2004, US Senator Richard Lugar presents the very first issue of The Atlantic Times at the German Embassy in Washington DC.