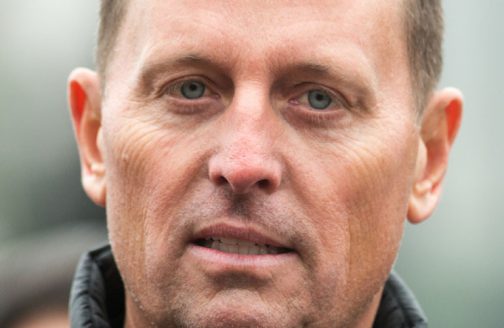 In the dispute over the Nord Stream 2 gas pipeline, German Minister for Economic Affairs and Energy Peter Altmaier is openly seeking a compromise with the United States. The German government will ensure that there is a liquefied natural gas (LNG) terminal in Germany, he said. American LNG – albeit expensive – could then be brought into the country. Europe cannot be “susceptible to blackmail,” Altmaier said on Feb. 13 in Berlin, in the presence of US Deputy Secretary of Energy Dan Brouillette.

That was largely a response to the increasingly vitriolic dispute over the construction of the 1,230-kilometer pipeline, one-half of which is paid for by Gazprom, while the other half is billed to five Western European companies – two from Germany, one from Austria, one from France and one British-Dutch enterprise.

In mid-January, Richard Grenell, US ambassador to Germany, caused a stir with a series of threats that were quite unusual for a diplomat. Through a series of letters, he made an appeal to German companies “operating in the Russian energy export pipeline sector,” explaining that involvement in the construction of Nord Steam 2 will “carry significant sanctions risk.” In fact, the project is “actively undermining Ukraine and Europe’s security.”

It is no surprise that Grenell’s provocation was met with firm objections in his new country of residence. German Minister of Foreign Affairs Heiko Maas countered with a statement explaining that questions of European energy policy must be decided in Europe. The chairman of the Chemistry, Mining and Energy trade union matched Grenell’s effrontery with a bit of his own, comparing the ambassador to a representative of an occupying force, and claiming that the US was not engaging in foreign policy but rather flooding us with American gas.

Furthermore, the construction of the pipeline has been met with controversy within the EU as well. Ukraine is fearful of losing its transmission tariffs, but Altmaier has also vowed to make sure that Russian gas can be piped through Ukraine and Poland and into Germany. Others, including German politicians, are wary of growing too dependent on Russian gas, despite Russia’s dependence on foreign currency. And Poland is against the construction as it conflicts with its own interests; it is seeking to become a location for a distributor hub.

Considering Altmaier’s statement, Grenell could now declare a victory of sorts. And yet, Grenell’s meddling could actually achieve the opposite of its desired effect, namely mistrust and opposition. The US is increasingly wielding its market power not only against its opponents, but against its friends as well, wrote Georg Mascolo in the Süddeutsche Zeitung. It’s not always clear “where politics end and US economic interests begin.” In lieu of Russian gas, the US would like to hawk its LNG in Europe. Former German Ambassador in Washington Wolfgang Ischinger advised Grenell: “Never tell the host country what to do, if you want to stay out of trouble. Germans are eager to listen, but they will resent instructions.” EU parliamentarians eventually entertained the question of how it would play out if the EU sanctioned American companies that are continuing to do billions of dollars of business with Saudi Arabia after the murder of Jamal Khashoggi.

Grenell began earning his reputation in Germany as a diplomatic bad boy on his first day in office. Like a journalist, he took to Fox News to weigh in on German politics and to upbraid his host country for its meager military spending and big trade surplus. And after Donald Trump withdrew the US from the Iran nuclear deal, he tweeted: “As @realDonaldTrump said, US sanctions will target critical sectors of Iran’s economy. German companies doing business in Iran should wind down operations immediately.”

In the mean time, the German Federal Office of Aviation has revoked take-off and landing rights for Mahan Air, the Iranian airline on the US sanctions list. As did US Secretary of State Mike Pompeo, Grenell praised this as a “großartiger Schritt,” or terrific step. But in order to enable European companies to continue doing business with Iran, Germany, France and the United Kingdom have established a special purpose vehicle through which payment transactions can pass if private banks’ fears of punitive measures by the US force them to reduce their selection of clients. This entity, named INSTEX, or Instrument in Support of Trade Exchanges, will offset claims by European and Iranian companies – e.g. oil will be paid for with other commodities. Europeans hope INSTEX will help them save the Iran nuclear deal, even if quite a few large corporations are already withdrawing from the Islamic Republic.

Politico recently editorialized on Grenell’s performance thus far: “The man whom critics dismiss as ‘the little Trump’ may not have captured many hearts and minds in Germany, but more often than not, he has succeeded in winning the argument.” At the very least, he is a diplomat who is heard of more than any of his colleagues. 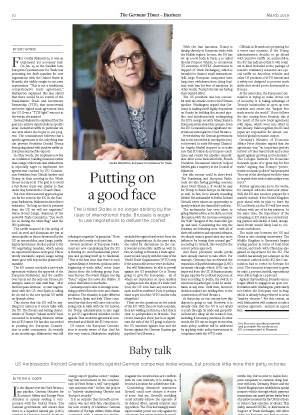