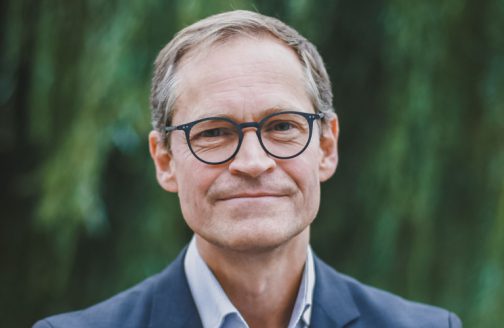 Berlin was an eminent spot in the world of academia in the Roaring Twenties and is again becoming the place to be for young talent and top-notch scientists. One in three newly enrolled students at our universities and colleges comes from abroad, and the percentage of international faculty in the city is on the rise. From artificial intelligence and cutting-edge medicine to the worlds of literature and ancient civilizations – few other locations can offer such a wide range of leading expertise and state-of-the-art research. You wouldn’t expect the city’s mayor to say anything else, of course, so I’ll let the facts speak for themselves.

Berlin? A global top-ten destination, says the UK-based QS Best Student City listing. The city boasts a unique density of excellent universities, according to the Times Higher Education international ranking, on a level with the likes of Boston, London, Paris, Hong Kong and Los Angeles. Berlin’s newest flagship enterprise, the Berlin University Alliance, formed by the Freie, Humboldt, and Technische universities, was recently distinguished for its excellence in a tough national competition, together with the Charité, which itself was just named Europe’s best university hospital, scoring fifth worldwide in the Newsweek’s recent evaluation of a thousand university hospitals around the globe.

This time-honored institution is now an acclaimed TV star, too, with its three centuries of history and an audience of millions on all continents. Check out the first two seasons of Charité on Netflix, if you haven’t seen it yet. No doubt about it, 30 years after the fall of the Berlin Wall, higher education and research are playing a key role in the German capital and enjoying high priority for its government. They are back on center stage.

“Brain City Berlin,” as it’s known in an information campaign, is now home to a quarter-million students, researchers and staff employed by the 30 academic institutions and over 70 research institutes across the entire city. And with the bright minds come the companies, making Berlin one of the world’s most attractive locations for tech-savvy entrepreneurs and investors on the lookout for the next big thing.

A true boomtown for young startups and the ideal foundation for established multinationals like Siemens seeking to reinvent themselves in the digital age. This unique environment is the key to Berlin’s positive economic development of the past few years, with tens of thousands of new jobs, continuously shrinking unemployment rates and steady budget surpluses in a city formerly dubbed “sexy, but poor.”

But it’s not just its size and the sheer numbers that do the trick. One of Berlin’s most attractive features is its distinct culture of cooperation, both among the institutions within the city and even more so with the world surrounding it. Oxford University’s decision to form a strategic alliance with our universities and its plans to establish a presence here is just one recent example. Likewise, international funding heavyweights such as the Bill and Melinda Gates Foundation, the Wellcome Trust and George Soros’ Open Society Foundations are moving to the city to be part of its dynamic environment, and not least for the promise of a place that breathes freedom and stays true to the ideals of openness and tolerance.

It is important that we keep our doors open wide and welcome people from all over the world with joy and hospitality, whether they are Nobel Prize winners or people seeking refuge from oppression. Any calls for limiting the number of people who move to Berlin are absurd and harmful. Berlin is and will remain a place of openness, a place where borders are overcome and walls are broken down. The German capital is a center of intellectual life and a modern marketplace of ideas, guided by international dialogue and exchange, and with the ambition to contribute to solving the challenges that face our societies, be it climate change, the impact of the digital transformation, questions of social cohesion or global health.

The very week in which we celebrate the 30th anniversary of the crumbling of the Berlin Wall will also feature the Berlin Science Week and the Falling Walls Conference. Both annual international events offer a stage for young talent and topnotch scientists – and myriad opportunities for Berliners to dive into the world of research and innovation. I look forward to seeing you there. 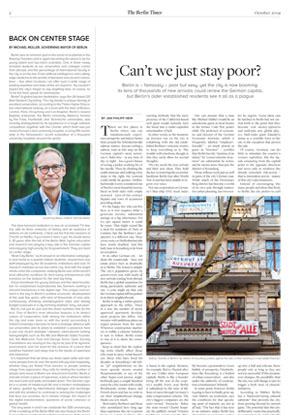