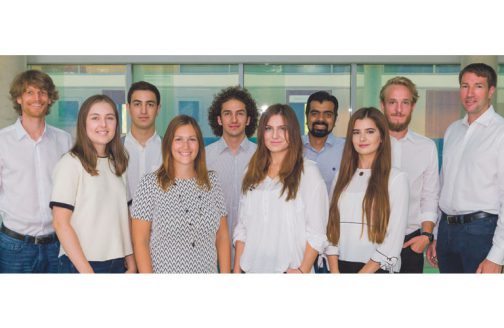 If you want to build a building, you need construction machinery and industrial cranes. When the work of those excavators and wheel loaders is done and the building is standing erect, the machines are taken back to the depot. In fact, a large portion of building equipment is active on construction sites for only 50 percent of its “lifetime.” In the case of cranes, that number sinks to only 25 percent.

These figures were ascertained by Manuel Kimanov and Rezi Chikviladze, two business students at Jacobs University, a private educational institution in Bremen. Their original assignment had been to develop new business models for the “sharing economy.” After looking at the numbers, they were able to put their findings to almost immediate practical use in the form of Sharemac (www.sharemac.de), their online platform for construction equipment rental, which premiered in January 2019 at the hanseBau tradeshow. The database contains more than 32,000 pieces of construction equipment of different brand names, including their performance data. Booking online is easy, and there is a 4 to 8 percent per-transaction rental fee, which is shared equally by the renter and lender.

For Sven Voelpel, an economics professor at Jacobs University and the academic mentor to the Sharemac founders, it’s a win-win situation for both sides: “Construction equipment lenders gain an additional source of income; renters are given cost-effective opportunities to rent; and it’s easier to overcome bottlenecks, for example, in the case of short-term orders.”

“Don’t buy it, use it” is the motto of the “share economy,” a new, solidarity-driven way of doing business that is now catching on in Germany. Sharing, renting, swapping, leasing and joint use

are common today in many areas of application: cars, apartments, clothing and music are shared, as are a number of key technical devices, such as drills, which some users need only once a year. Perhaps the most important aspect of “shared use” is the cost savings, but the environmental impact of such sharing is also growing in importance, for example via the reduced use of resources for product manufacturing. A third aspect is the social nature of sharing, which encourages the capacity of a product to bring people together, not separate them.

Still, not everything about the sharing economy is positive. There are some unwanted side effects, as Gerd Scholl from the Berlin Institute for Ecological Economy Research (IÖW) noticed. He was involved in a research project examining the environmental impact of peer-to-peer sharing in the realms of private car sharing, private carpooling, private apartment sharing and the online trading of used clothing between private individuals. As Scholl notes: “The focus was on the sharing done between private individuals, because this area had emerged only a few years prior and created entirely new markets that did not exist before.” Scholl’s team ascertained that the greenhouse gas potential – the generation of climate-damaging gases – was reduced by 40 percent when individuals purchased secondhand T-shirts as opposed to new ones. “In addition, if the T-shirt was purchased via an online platform such as Kleiderkreisel, the reduction in greenhouse gases would be further enhanced to 47 percent, as calculated in terms of an average female user,” reports Scholl, rating the additional ecological gain achieved as “rather moderate.” The is due to what is called a boomerang effect: while the sharing platform did indeed reduce the consumption of new products, it nevertheless also increased the purchasing of clothes as a result of “low prices and clearer market transparency.”

Scholl also criticizes the fact that sometimes this sharing leads to the exclusion of individual social groups from the use of the goods. “For example, short-term rentals à la Airbnb are increasingly competing with long-term rentals as living space in large cities becomes ever more scarce.”

Still, particularly in terms of the usage of space in urban areas, the sharing economy enables new forms of economic activity. So called Open Creative Labs (OCLs) feature special co-working conditions and equipment sharing, at least according to the first-ever German study on the issue, which was undertaken by the Leibniz Institute for Research on Society and Space (IRS) in Erkner, just outside of Berlin.

The idea of OCLs is itself a scientific concept created to describe the diversity of such open creative spaces. They call themselves “maker spaces” and “fablabs” and represent open workshops and co-working spaces where creative minds, inventors, entrepreneurs and founders tinker on their technical inventions and social innovations. “You can think of them as local counter-worlds,” explains IRS researcher Oliver Ibert. To the external world, these creative spaces operate in legal terms as associations or cooperatives while, internally, they function according to their own rules and values (“sociocracy”). “These are sites of sharing – everything from expensive equipment to knowhow and social capital,” says Ibert. The credo is as follows: “Everyone who happens to be going in the same direction is welcome.” At IRS, Ibert teamed up with his colleagues to conduct a three-year research project on behalf of Germany’s Ministry of Education and Research (BMBF) to examine for the first time how the new digital alternative scene was developing in Germany. Some 357 OCLs concentrated in 11 metropolitan regions were examined. The largest number of labs (100) is found in the Berlin-Brandenburg region; this is where the economic effect is also the greatest, with 3.5 labs per 100,000 employed individuals. The Ruhr Valley area has 51 labs, followed by the clusters in and around Munich with 36 labs and Hamburg with 35. The number of employees is difficult to assess, as staff turnover is very high. International figures also show that the sector is booming across the globe. While 3,400 co-working spaces were counted worldwide in 2013, that number had more than doubled to roughly 7,800 two years later.

“Open labs offer new opportunities for innovation outside of established institutions,” explains IRS project manager Ibert with regard to the spaces’ qualitative characteristics. “They offer a niche for specific minorities – one in which the focus is on their particular needs.” Above all, it is the labs’ “openness to socially relevant problems” – such as nutrition, mobility and recycling – that makes them important for the future.

And, precisely for this reason, the IRS researchers recommend that state funding bodies proceed with caution: “Direct forms of political support might actually have a counterproductive impact considering the grassroots and autonomous nature of these labs.” Researchers argue that it would be much better to provide indirect support for user groups and associations, such as providing them with affordable facilities and spaces.

Thanks to the process of digitalization, platform economies have emerged that would have been unthinkable only a decade ago. However, according to Uwe Schneidewind, president of the Wuppertal Institute for Climate, Environment and Energy, they can also be used on a smaller scale by online platforms (“small is beautiful”) that pursue “sharing as a culture of togetherness and non-commercialized exchange.” In his latest book Die Große Transformation (The great transformation), which describes seven ecological and economic transformation scenarios on the path to sustainability, Schneidewind attaches particular importance to the sharing economy as part of the “turnaround in prosperity and consumption.”

He cites as examples the exchange of knowledge (Wikipedia, open data), the joint development of software (open source) and products such as the Open-Car-System, which focuses on collaborative automobile development, as well as “the collaborative forms of regional goods and services exchange.” Schneidewind, an economist by trade, emphasizes that “decentralized peer-to-peer processes can prevent the emergence of overly powerful digital platforms and private monopolies.” Still, he argues, this counter-course will be feasible “only with state backing and support.” It seems the sharing economy would stand to benefit from economic policies that acknowledge its specific needs. 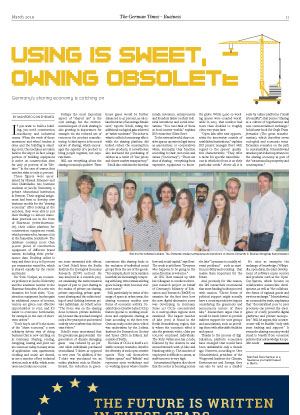