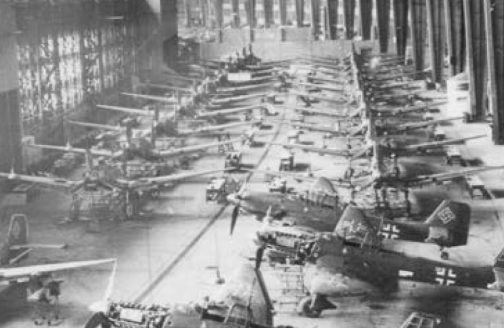 Tempelhof Airport is firmly anchored in the collective memory of (West) Berlin residents first and foremost as the main take-off and landing strip used by the American and British “Rosinenbomber” (transport planes) during the Berlin Airlift 1948-49.This “gateway to the free world” would continue to influence the emotional lives of West Berliners from the 1950s on. In contrast, very little is known about the role played by Tempelhof Airport during the era of National Socialism (1933–1945).

The exhibition “Ein weites Feld” (A Wide Field – Tempelhof Airport and its History), which is on display until the end of the year in the former General Aviation Terminal, seeks to change this. Curated by the Topography of Terror foundation in Berlin, the exhibition focuses on the strategic expansion of the airport starting in 1936 and its later use as a weapons production site. Emphasis is also placed on the fate of the thousands of laborers who were forced to work on the assembly of combat aircraft.

Large sections of the monumental airport complex at Tempelhof were built between 1936 and 1939 at the edge of the then airfield. Although never fully completed, at the beginning of the 1940s it comprised the largest building in the world in terms of area covered; in the post-war period, that position would be usurped by the Pentagon in Arlington, Virginia. The dimensions at Tempelhof in the Nazi era reflected a preoccupation with overly large buildings that was typical of National Socialist architecture. The original terminal building, which functioned as such up until the end of the war, appeared almost as a dwarf in comparison to it.

With the outbreak of war, the new airport complex was transformed into a large-scale aircraft factory. The roof of the building was extended over the airfield’s “apron” and given a wooden exterior, thus creating spacious factory halls. The companies known as Weser Flugzeugbau and Deutsche Lufthansa used the facilities as an important site for the manufacturing of equipment for the Luftwaffe during the war. Among other things, Tempelhof saw the production of roughly 2,000 Ju-87 dive bombers, which would go on to become the backbone of the Nazi Luftwaffe.

During the war, the only way to guarantee the efficient assembly of aircraft was to use massive numbers of forced laborers taken by the Nazis from German-occupied territories. More than 3,000 men and women were ruthlessly exploited and forced to work in weapons manufacturing for the Luftwaffe. Living in barebones barracks at the edge of the airfield, the forced laborers had to work for ten or more hours each day, all the while with inadequate amounts of food. They faced draconian punishments for the slightest negligence or offense and there was very limited medical care. This meant that many of the forced laborers did not survive their time at Tempelhof; some were even killed in Allied bombing raids.

While the old manufacturing buildings were almost completely destroyed in the war, the new main building remained intact. The order to demolish it was apparently ignored by the airport commander, and the Allies also spared the complex, seeing as they planned to use it for their own purposes. The Red Army was actually the first to occupy Tempelhof airport, but in July 1945, the US Air Force took over and maintained an air base in the eastern part of the building all the way up to 1994. The western part of the airport was opened for civil aviation under German administration in 1951.

The image of the US soldiers in West Berlin changed deeply with the start of the Berlin Airlift or “Luftbrücke” (air bridge). After the unprecedented supply of food and especially coal to the city – which had been sealed off on all sides by the Russians – between June 24, 1948, and May 12, 1949, Berliners started to see the GIs more as protectors than as occupiers. From that moment on, this new relationship was reflected and celebrated once a year at the US Air Force’s Open Door Day at Tempelhof, a huge festival attended by hundreds of thousands of people.

The gratitude of Berliners for the energetic and extensive soli­darity shown by the Allies for their walled-off city will be on display again in the coming year. A week-long festival is currently in the works for June 2019; the event will take place at three locations and commemorate the end of the Berlin Airlift 70 years prior. The special feature of the fest: those historical “Rosinenbomber” transport planes will be returning to Germany. A number of the original planes – including Douglas DC-3/C-47, Douglas DC-4/C-54 and Junkers JU-52 models – will make their way from several different corners of the world, first to the Wiesbaden Erbenheim Airbase (June 10–12) in Hessen, then to Fliegerhorst Faßberg (June 12–15) in Lower Saxony and finally to the airfield in Berlin-Schönhagen (June 15–19).

Of the many airplanes that participated in the Airlift, there are only roughly 160 left in operation worldwide. Individual fans, foundations, museums and associations spend a lot of time and effort to keep them in good flying condition. For the one-week festival in Germany, almost 40 planes have already agreed to participate. Some of them will be coming from diverse European cities, over 20 will be flying from the United States, and a DC-4 will be coming to Germany from South Africa. One owner has indicated that he intends to make the flight all the way from Australia to be a part of the reunion.

With the help of these original aircraft, organizers will reenact the actual schedule and time intervals from 1948–49 at the three airports. In other words, for the first time in 70 years, a new generation of Berliners will be able to experience the Airlift with their own eyes. At the airports in Wiesbaden-Erbenheim, Faßberg and Berlin-Schönhagen, crews and aircraft will also be on display for the general public to visit up close. Plans include a “Luftbrücke zum Anfassen” (hands-on airlift) accompanied by multiple-day public events and school and youth projects.

Whether the airplanes will be able to land at Tempelhof Airport is currently being debated in Berlin political circles. While a special permit good just for the exhibition is theoretically conceivable, it seems highly improbable. The spacious tarmac of the airport, which was decommissioned in 2008, is now a park mainly used by the residents of its surrounding neighborhoods. The technical and logistical arrangements required for a three-day commemorative event will presumably end up being too protracted to incorporate the central site of the Airlift.

For recent generations of Berliners, the sheer scale of the largest humanitarian relief action in the history of the world can be hard to comprehend. For more than a year, propeller planes delivered a total of two million tons of supplies to Berlin. Thus, more than 270,000 flights, i.e. almost 1,000 flights per day to guarantee the survival of the hungry and freezing citizens of West Berlin. The technical and logistical feats of air transport executed by the pilots and ground crews remain one of a kind and will forever be linked to the history of Berlin.

The incessant, positive reports by news outlets all over the world focusing on the Allied air deliveries in 1948–49 and the burgeoning reputation of the Western powers constituted one of the reasons the Soviet Blockade was lifted on May 12, 1949. Nonetheless, the Airlift carried on for another four months until late summer of that year. The twin historical events, Berlin Blockade and Berlin Airlift, are thus not chronologically identical.

The lifting of the Blockade and the end of the Airlift marked the resolution of the first true crisis of the Cold War by peaceful means. However, the absence of military force did not prevent all loss of human life during the Air Lift. Airplane accidents accounted for the death of at least 78 people, the names of whom are engraved on the base of the Airlift Memorial in front of the former airport.

One of the honorary guests at the 70 Years Berlin Airlift festival will be none other than Gail Seymour “Hal” Halvorsen, born Oct. 10, 1920, in Salt Lake City, UT. Halvorsen was the first pilot to – just before landing at Tempelhof – delight children waiting atop the mountains of rubble in Neukölln by pitching from his plane bags of candy, each equipped with its own little parachute. This Operation Little Vittles led to the Airlift pilots and their airplanes to be called “Rosinenbomber,” or “Candy Bomb­ers.” As the airplanes landed at Tempelhof every 90 seconds, the children on the ground could not tell which one was Halvorsen’s. He thus arranged with the kids that he would “wiggle” his wings as he approached, earning him the nickname “Uncle Wiggly Wings.”

Halvorsen’s initiative was quickly picked up by the press, unleashing a wave of support. He and his crew were soon given 425 kilos of sweets to drop on Berlin each day. By the end of the Air Lift, a total of about 25 airplane crews threw 23 tons of candy over the city. Halvorsen would later explain that he had just wanted to bring a little happiness to the needy children of bombed-out Berlin. Historical eyewitnesses agree that he had a tremendously positive impact on the image of Americans in postwar Germany. 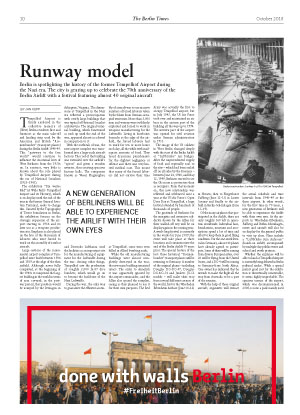