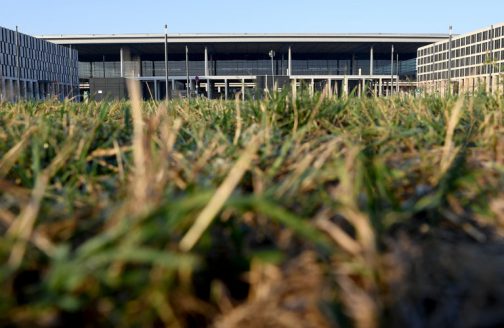 In Berlin, no one is surprised when they have to get up at five in the morning and head to the department of motor vehicles in order to register a car before noon. Or when they notice that a construction site blocking part of a major road has been devoid of even a single worker for months. Or when it takes days to get a particular city administrative employee on the telephone. Sloppiness is as much a part of the city’s character as its caustic wit.

After 14 years of construction, Berlin’s new airport is now set to open at the end of October 2020. Its completion has already taken three times as long as originally planned. The total cost of the airport is approaching a figure 10 times that of the initial budget and could reach €10 billion. In Berlin’s parliament, the second committee of inquiry has already been working for years to clarify the “causes and consequences of the delays and cost overruns.”

YouTube offers viewers a chance to watch the press conference held on May 8, 2012. This was the day authorities canceled the opening of the airport, which was due to take place only three weeks later. Ever since, Berliners have had to field countless questions from foreign visitors as to whether the half-finished terminal should rather be demolished than completed , as it was already old enough to be torn down and replaced.

Back on that 8th of May, Berlin’s mayor at the time, the Social Democrat Klaus Wowereit managed, above the laughter of the journalists on hand, to call the airport building a “success story” –  despite the fact that the CEO and the technical manager of the airport had just acknowledged that they could not get a grip on the main terminal’s smoke extraction system. Ventilation in the massive building, later called “the monster,” was simply not functioning as it should. “The second half of August at the latest,” was the new launch time announced by Matthias Platzeck, the minister president of Brandenburg, the federal state that completely surrounds the German capital.

His schedule was slightly off. Instead of three months, the delay would last another eight years.

While people in many parts of the world complain about ignorant government administrations, there’s something special about the nonchalance of the Berlin bureaucracy. Its inefficiency, incompetence and lack of political accountability are legendary. The underlying cause can in large part be found in the recent history of the city that was divided until just over 30 years ago. For decades, the municipal administration and public officials in West Berlin were co-financed by the Federal Republic so that the market economy on that “island” surrounded by socialist East Germany could survive. Politicians and administrators in West Berlin knew that they could get away with a lot without being abandoned by West Germany. The major political parties from that time, the CDU and SPD, have yet to fully rid themselves of this devil-may-care mentality.

The litany of scandals plaguing the airport named after former Chancellor Willy Brandt began with the 1996 decision of where to build it. Two suitable locations in sparsely populated Brandenburg, around 60 kilometers south of Berlin, were discarded in favor of the former GDR airport of Schönefeld, directly at the city limits. Hundreds of thousands of residents will stand to suffer under the persistent roar of jet engines. While there will be a flying ban from 11pm to 6am, the noise problem will only worsen as the city grows around the airport.

In the second phase, the federal government and the state governments of Berlin and Brandenburg decided that the airport company, which is owned in parts by these three administrations, would plan the new construction itself. The politicians had concerns of being bamboozled by construction corporations like Hochtief and hoped to be able to accomplish the project in-house with a lower price tag than with a private general contractor. Although the airport company had ably operated Berlin’s three old airports – Tempelhof, Tegel and Schönefeld – the planning and steering of a new multibillion-euro airport complex was beyond its capabilities. “This was a case of utter hubris,” says Harald Moritz, a Green Party politician who sits on the inquiry committee. “Commissioning an external planning entity would have been the right move.”

The misery was set in motion. The airport company lacked competent employees. Policy was consistently being diluted with new wishes. Planning would head in one direction, only to turn quickly in the other. Moritz describes the fallout: “In some cases there were tender processes for construction contracts before planning had even concluded.” And then there were insufficient controls on the part of the supervisory board and perhaps even attempts to conceal mistakes.

Mayor Wowereit, who also acted as head of the supervisory body, was busy with many other tasks and failed to adequately attend to the colossal construction project. So the invitations to the inaugural ceremony were already printed when the company abruptly canceled the party. Officially, Wowereit was flabbergasted, but he should have seen the disaster coming.

The directors of the airport company were fired, as well as the architecture firm responsible for planning: Gerkan, Marg and Partners. People more or less stopped visiting the construction site. Wowereit’s political career ended in 2014 – the airport story had ruined his reputation.

For several years thereafter, not much happened. A few more advertised opening dates were quashed. A series of alternating managers and engineers attempted to provide an overall picture of the failing project and to find an approach to resurrecting it. Cable ducts were severed once more and new conduit track was laid. The monstrously vast smoke extraction system was divided in to several separate segments.

At the beginning of 2017, the airport proprietors appointed Engelbert Lütke Daldrup as the new CEO of the airport company. “He tightened the reins organizationally,” says Moritz. An external firm specializing in project management stepped in. The permit authorities have now certified the airport’s viability. And there’s a new opening date: Saturday, Oct. 31, 2020. Presumably everything will proceed on schedule.

If Lütke Daldrup does eventually succeed, he will also be salvaging Germany’s reputation as a nation of engineers. But many observers have their doubts. What if the Germans can’t manage to get a normal-sized international airport up and running? What should we then expect of the quality of the machinery and automobiles that they sell all over the world?

If Berlin’s airport story ultimately has a happy ending, let it be proof that state intervention in the economy is not necessarily a bad thing. Of course, it depends upon who is intervening and how. In any case, public enterprise should heed the basic tenets of business management. Good governance is the buzzterm here, and that includes competence, rational project management, controls and responsibility.

The fact that such a thing is fundamentally possible, even in Berlin, was on display at the end of March. Within a few days, Berlin’s state-owned Investitionsbank distributed hundreds of millions of euros of aid money to tens of thousands of firms that were temporarily forced to close up shop due to COVID-19. Public service functioned more or less flawlessly and with astounding efficiency – a good sign for a modern federal capital, with a new airport to boot.

Hannes Koch
is a journalist and author living in Berlin. He is the cofounder of the press agency “die korrespondenten” and recipient of the 2018 Theodor Wolff Prize. 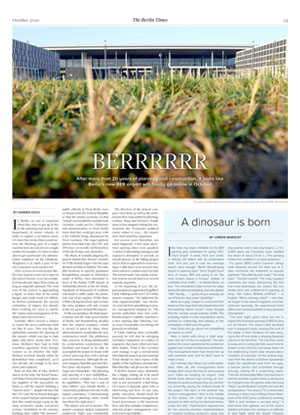