The misgivings harbored by many Germans with regard to migrants are steadfast and long-standing. This will not come as a surprise to anyone who has taken the time to examine the state of migrant integration in German society over the past decades. What is alarming, however, is the number of Germans who judge the failed integration of migrants and their children more harshly than they do the failings of their fellow Germans. It’s not only those on the right who see every criminal with Turkish, Iraqi or Tunisian roots as an opportunity to demonize all migrants; they are not the only ones who sneer at “Kanake” talk, a derogatory term used to describe the German spoken among migrant youths that often comprises crude colloquialisms and expressions in their native tongues. In fact, no matter where they stand on the political spectrum, people who are quick to criticize migrants inevitably have one thing in common: a false sense of superiority.

Many of us in Germany have yet to learn how to share our lives with people who are “other.” This seems to be a value and an approach to life that we rarely strive to achieve. Few people in Germany seem to even have the ability to view “strangers” as equals. Today, this inability is creating an even greater rift in German society. All too often, public debate on integration is characterized by a willingness to focus solely on the shortcomings of “others.”

Indeed, it would seem that for years no one has been prepared to take the social and political responsibility needed to be able to seek out and find new solutions. How else can we account for the fact that over several decades, large numbers of youth socialized in a Muslim context in Germany have consistently lost out in terms of education? How else can we explain why Germany’s current government has not been able to fill a single cabinet post with a person with a “migration background”? And even after nearly 60 years of recruitment agreements, the prospect of having a head of state with Arab or Turkish roots remains wholly inconceivable.

A recent TV program examined the conditions at a school in the Berlin district of Neukölln where almost all students come from immigrant families, including so-called problem students, that is, those whose families depend on welfare funds (Hartz IV). The report begins by stating that 18 of the 24 students in the class arrive late for first period. We are told that many parents fail to wake up in time to get their kids to school on time. Accord­ing to the report, these kids are often made to attend school only to render their parents eligible for Kindergeld (child benefits – a social security payout for all parents and guardians). A teacher with a thick Eastern European accent – a man who thinks the plural of “crisis” is “crisises” – is seen lamenting the lack of interest in education among his students. The film them shows close-ups of children who, though they appear self-conscious, are nevertheless proud to be the object of media attention. Although most of these students were born in Germany, not a single one of them can deliver a grammatically correct sentence in German.

Scenes such as these should be enough to warrant a thorough analysis of how and where things went wrong. How is it possible that huge numbers of children circumvent the legal obligation to attend school? How can this happen in a country that had a €48.1 billion GDP surplus in the first two quarters of 2018 alone. And what’s wrong with the students themselves? Can it be possible that all their problems are related to their oft-cited “migration background”? In all honesty, do we even want them to be mixed in with the majority of students? Should they lead “normal” lives, where they attend school regularly, that is, where the state actually carries out its supervisory duty with regard to mothers and fathers who are overwhelmed by their circumstances? These children live marginalized lives in districts that many non-migrants actively avoid; and they are cared for and receive their education in kindergartens and schools that are widely known to be problematic.

Kids like these can be found throughout Germany, especially in areas where large numbers of immigrants reside. From a statistical perspective, they are the “losers” of German society. After all, the cold hard reality is that access to education is directly related to a child’s social and economic background. For these kids, the Muslim ghetto is their only place of influence, a place where the often romanticized traditional values of their grandparents’ culture become the benchmark for their lives in Germany.

By the end of the TV report, attentive viewers will have begun to notice – almost accidentally – the longings and hardships etched into the heart and mind of one particular pimply-faced teenage boy. This boy with Turkish roots sits down and begins to play a piece on the piano – something he taught himself to do. His teacher admits that all these years, she’s never known he could play piano.

It goes without saying that we cannot single out teachers as being solely responsible for the thousands of students who leave school every year without attaining their degree or with a certificate that condemns them to dead-end jobs. This state of affairs is a consequence of massive political neglect, as well. In fact, the school featured in the TV report was slated to be shut down due to declining student numbers – a fact that was left unmentioned by the producers of the program, which was broadcast on German public television. Instead, the school became a repository for students who were not accepted elsewhere. Now, with an increased budget and new friendly-sounding support programs, the school has become an institution for those who are more or less biding time before a likely adulthood spent on Hartz IV or in prison. I guess it didn’t occur to anyone to put the few remaining students into a different school.

Instead of disrupting a classroom populated by the children of the ambitious middle class, these children are left to fend for themselves, causing more strain on weary teachers and creating fertile terrain for Islamists in search of new souls. These are clearly not the goals of integration.

Güner Balci
is a documentary film maker, journalist and author. Her latest novel Das Mädchen und der Gotteskrieger (The girl and the holy warrior) was published in 2016. 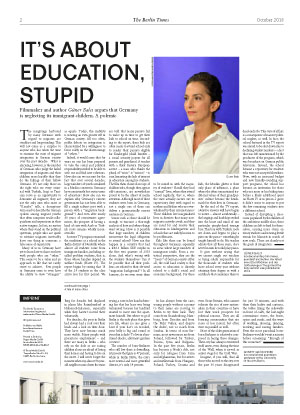