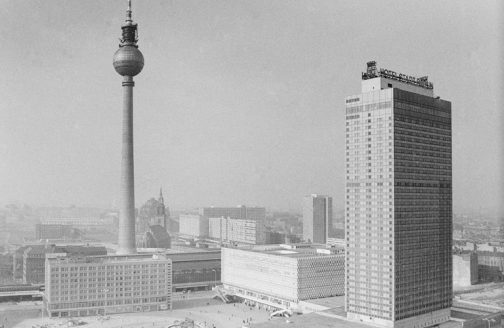 November 9, 1989, was the day the world first experienced sympathy for the Germans. In fact, the international community was surprised to find out that that the Germans were even capable of experiencing deep human emotions. And it seems to me that East and West Berliners had never – neither before this day, nor after – been so truly happy for each other.

East Germany disappeared within a matter of days. No one from the GDR could have seen this coming. It had been the poster child for success and prosperity in the Eastern Bloc. Soviet leaders loved traveling to thriving East Germany, so that upon their return they could triumphantly proclaim: “Now that’s how the socialist model is supposed to work!”

Then, suddenly, that modern-day Atlantis, that tangible proof of the righteousness of innovative ideas, disappeared from the political map of the world – not by will of celestial forces, not via natural disaster, not due to the guile of an insidious enemy, and not even through the fault of the few East German dissidents whom the authorities saw as their main enemy.

The fall of the Berlin Wall was a particularly significant event for our family, as my mother, Irina Mlechina, had devoted her life to 20thcentury German literature. It was also the moment when my mother found herself on Alexanderplatz, the square she knew like the back of her hand.

She still remembered it as nearly empty, gloomy and bearing the wounds of war. Gradually, the square grew prettier, more developed and, perhaps in line with the architectural preference of the day, not very elegant. A huge hotel appeared, Hotel Stadt Berlin, where she stayed many times; the large Centrum department store was constructed, and filled predominately with visitors from socialist countries. Most of them were Poles and Russians, and there was even a joke that went around: “There’s a shootout at Alexanderplatz. The Poles are defending their department store.”

But now the square looked completely different. It sparkled and shone!

The GDR collapsed overnight, yet the East German citizens themselves, in essence, regretted nothing, although still to this day part of the population of the “new German states” recalls that time with little or no remorse – Ostalgia, it’s called, as Ost is German for “east.” Like many Russian citizens who had wholeheartedly embraced perestroika, they became convinced that real democracy has failed. But something has in fact changed. And my mother misses that which has departed. She did not forget that in those bygone days, relations between people were structured along slightly different lines. This does not mean that it was better then, nor does it mean that it’s better now. For her, it was always the individuals themselves and their own integrity that ultimately meant the most. She could only befriend decent people, and never could conceal her likes and dislikes.

But if decent people were forced in those – and these – times to play a specific social role imposed on them by time and history, from which they could not escape without heavy casualties, then how can we relate to this now?

It’s not about executioners and murderers, nor those who marched over the corpses. It’s about the people who did not do any harm, the people at Alexanderplatz on Nov. 4, 1989, who copied down the iconic author Christa Wolf’s speech in their notebooks. Shortly thereafter, these same people would write her furious and threatening letters as she tried to explain away her associations with the Stasi and prove her identity as a true East German.

Freedom, guilt, responsibility – German literature in the second half of the 20th century offers the most brilliant and valuable material for reflecting on this theme. But then who will take upon themselves the mission of delivering the singular proper judgment? This is all just to say that, for my mother, people like her old friends Christa Wolf or Gunter de Bruyn, whatever others may say about them now, remain friends.

It is difficult to understand all this today, as there is neither the GDR itself, as if having crumbled into the abyss of history, nor many of those who with genuine enthusiasm accepted the changes instituted after the defeat of the Third Reich. In the years of the GDR, especially until the 1970s and 1980s, these individuals lived with the belief that they were building some kind of new and more just society. For them, this passion of the first years was doubly justified by the fact that in their youth or adolescence, they had survived fascism, war and then discovered – as many truly had not previously known – the horrific crimes of the Nazi regime.

Mother lived in an era that, after a number of years, no one will understand, with the exception of those who also lived through it. And even those who were alive in this era are beginning to have doubts: Is it possible that none of it happened? Was it all a figment of the imagination?

These days, my mother is filled with regret that the literature of the GDR, like the GDR itself, this new Atlantis, no longer concerns anyone. Perhaps interest in the topics of war and fascism will again flare up, subjects about which today’s younger generation has but a superficial, meager and inaccurate awareness. And sometimes they are deliberately misled. As for Nazism, it is currently enjoying an undeserved level of respect among segments of the Russian population, and even has emulators. But this is a separate issue.

Leonid Mlechin
is an award-winning Russian journalist and film producer. He has written several history books, including a biography of Leonid Brezhnev. He lives and works in Moscow. 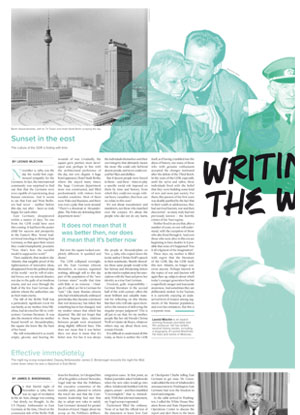