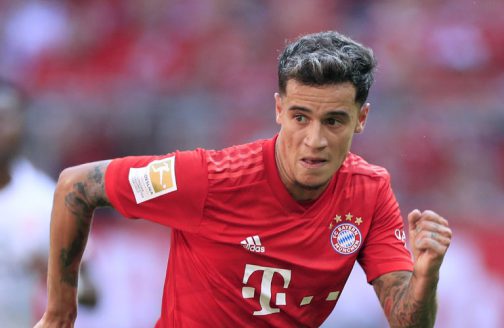 The best news from the Bundesliga, Germany’s top-tier soccer league, is that it looks like there will finally be a real battle for the championship this season. Yet only two teams have greater than an outside chance to vie for the title: FC Bayern Munich and Borussia Dortmund (BVB).

In the past seven years, the league has been dominated by that perpetually number-one team, Bayern Munich, even though they finished last season only one point ahead of the runner- up. In other words, a true head-to-head race – like the ones that take place on a regular basis in England and Spain – has not been seen in the Bundesliga for what feels like an eternity. In the 2018/2019 season, Dortmund was the first club to get nine points ahead, only to then go on a terrible losing streak and allow the Bavarians to catch up. At the end of the season, Bayern was back on top; not because they were so strong, but because Dortmund was so weak.

Bayern has managed to nab the top spot for the previous six years, with the only difference being that the Bavarians were actually super strong back then. In those years, the entire Bundesliga would run out of breath trying to catch them. So great was the advantage of Munich in the first half of the season that things often got boring come Christmas time. In 2014, Bayern clinched the championship on the 27th game day, with still seven matches yet to play.

This monoculture was not good for German soccer, and the longer it lasted, the more Bayern Munich itself began to suffer from it. For years, they had been major players in the Champions League, almost always among the top four teams in Europe. But in the spring of 2019, they exited in just the second elimination round, losing 1:3 at home to FC Liverpool in a game that made them look as inferior as the final score suggested.

This is the price clubs pay for years of being under-challenged in their domestic leagues. At some point, coaches of other teams start sparing their energy in games they are sure to lose against Bayern. Coaches sometimes even preferred to rest their best players for use in other league matches against eye-level rivals. Time and again when Bayern was in town, coaches didn’t even send their stars onto the pitch, with some coaches even openly admitting as to why.

A team that has the best players but is never forced to play at full capacity will eventually lose a sense of its own abilities and performance. If such a team then enters the international arena and faces opponents that don’t automatically see themselves as underdogs just because Germany’s top club is on the pitch, well, this can lead to nasty surprises.

In 2013, Bayern Munich won the Champions League against – of all teams – Dortmund. Since then, they’ve sputtered out once in the quarterfinals and four times in the semifinals. Last year, they didn’t even make it to the final eight.

Under the leadership of their long-time sovereigns, Uli Hoenes and Karl-Heinz Rummenigge, the club has been increasingly distracted by internal conflicts. In addition, the club hired Niko Kovac, a coach who enjoys the confidence of only one of the top dogs – club president Hoenes. Rummenigge, Bayern Munich’s CEO, has repeatedly and publicly expressed doubts about the coach.

Last season, as Borussia Dortmund took advantage of the situation at Bayern and pulled nine points in front and the Bavarians descended deeper and deeper into their morass. In October 2018, Hoenes and Rummenigge attacked the media, which had criticized some of Bayern’s players, and demanded more respect. It was a real-life satire whose only effect was to reveal for all to see just how massive the mess in Munich really was.

But then, in the middle of their deepest crisis in years, Bayern got some help from the very club that should have been benefiting from the turmoil: Dortmund. Bayern’s rival for the championship was simply incapable of maintaining its comfortable lead through the winter break, and repeatedly lost to opponents from the bottom of the standings. And the Bavarians eventually caught up.

At that point, it was Dortmund’s turn to unwittingly expose their own deep-seated flaws. On the one hand, they lacked the courage to state directly that their express goal was to win the championship. Coach Lucien Favre kept on insisting he wanted to focus “only so far as on the next game.” On the other hand, the team was also unhealthily dependent one single player: Marco Reus.

Reus is indeed one of the best soccer players in Germany, but he is also highly prone to injury. The 30-year-old has rarely been able to get through an entire season uninjured. Unfortunately, a key player who only plays 22 to 24 matches per year cannot be a true leader. This was on perfect display last year in a game where Reus injured himself once again and almost missed the rest of the season: as part of the knock-out round for the DFB Cup tournament, Dortmund was hosting Werder Bremen; the guests took the lead but the outstanding Reus equalized just before the break.

Unfortunately, he didn’t return from the locker room for the second half, and Dortmund ultimately lost the game in their own stadium. They would then go on to lose other important games in the Bundesliga as well. At the end of the season, they were second to Bayern – by only a single point.

This season, BVB is focused on doing everything right. They’ve strengthened their team in a comprehensive and targeted manner, making sure to be able to compensate for the possible loss of Reus. And Hans-Joachim Watzke, Dortmund’s CEO, has repeatedly expressed a clear goal: winning the title. In other words, Dortmund unashamedly wants to be the next German champion.

BVB is betting on strong young talent like Jadon Sancho, Thorgan Hazard and Bruun Larsen, each of whom has the opportunity to greatly increase his potential – and his market value – under coach Favre. Plus, Dortmund has found in Julian Brandt the ideal backup for Reus. Brandt is a technically strong and extremely dangerous goal scorer capable of driving the play forward, and he is also much more physically robust than the veteran captain Reus. In this sense, at the beginning of the current season, BVB is plagued only by a few “luxury problems,” including having a place on the bench reserved for the 2014 World Cup hero Mario Götze.

By contrast, Bayern Munich started the season in a slightly more chaotic state. They had sold one of their lead players, Mats Hummels, to Dortmund, but otherwise it was quite late before they made any moves on the transfer market. Unfortunately, none of these moves looked like the result of any type of real planning. Philippe Coutinho, the Brazilian who had been pushed to the side at Barcelona, came in at the last minute, but only on loan, as did the Croatian Ivan Perišić from Juventus Turin. The French defenders Lucas Hernandez and Benjamin Pavard joined the team, with lingering doubts about Pavard after his disappointing season at VfB Stuttgart, which saw that team sink into relegation in lackluster fashion.

Bayern is a hard-boiled collective entirely accustomed to winning, whereas Dortmund is a sensitive team that begins trembling as soon as things don’t go according to plan on the pitch. However, this is only one side – the most visible one – of the rivalry between the two teams. In a different realm, namely the management level, something very fundamental is changing. While the well-rehearsed Dortmund team unites around their CEO Watzke and general manager Michael Zorc to pursue their mission to win the championship title, at Bayern Munich, things still look rocky. There is a dispute underway at the top management level that already severely hampered preparations for the new season – and it seems this dispute will accompany the club throughout the season.

Although it can’t be argued that the Bayern bosses were ever true friends, the question of how to send the club off into a new era – that is, the question of who should take over after they retire – has obviously divided the two men. At the end of August, one of Bayern’s board members, Edmund Stoiber, even spoke openly of Hoenes and his “quarrels with Kalle.” Stoiber was minister president of Bavaria for many years and belongs to the inner circle around Hoenes, as does Herbert Hainer, the longtime CEO of Adidas.

At the 2018 general assembly meeting, it was made painfully clear to Hoenes that he had lost the backing of many club members. There were unheard-of requests for him to leave, even whistle calls and insults. One member even brought a North Korean flag with the words “NOT MY PRESIDENT” on it. Hoenes has never gotten over that.

This dispute at the top is now poised to continue in other ways as well. It’s all about Hoenes and his legacy. Hainer, his crony, is set to take over as president of Bayern Munich and also to hold the chief executive post on the supervisory board. Hoenes himself will remain on the supervisory board, and together they will coach a newcomer, their pick and the man set to replace Rummenigge in 2022: Oliver Kahn. The former goalkeeping hero will make the move to Bayern’s board in early 2020. Kahn has signed a five-year contract and insiders expect nothing less than an all-out power struggle between Rummenigge and his soon-to-be successor. Many connoisseurs doubt that “Killer Kalle” – Rummenigge’s nickname – will be able to fend off Kahn’s attempts to jostle for power.

There are also plenty of other internal issues on the table, such as coach Kovac and general manager Hasan Salihamidžić. Neither of these men enjoys unlimited support from the club or the players.

The 2019/2020 FC Bayern season is not just about winning championships, it’s about the future, about the final showdown between two dinosaurs, both of whom have made outstanding contributions to the club, but who are now increasingly seen as outdated models. In this light, the question is whether Borussia Dortmund will be able to profit from the self-made mess at Bayern. 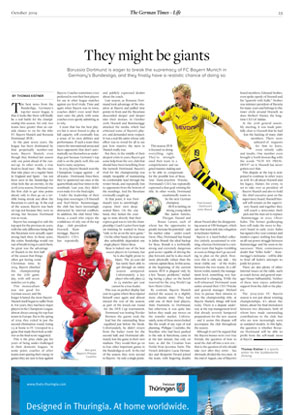